Just short of five years ago, the 158-year-old investment bank Lehman Brothers filed for bankruptcy, setting off a chain of events that rivaled, and in some instances exceeded, that of the Great Depression. A staggering 473 banks have since failed, and many others experienced unprecedented losses, capital depletion, and shareholder dilution.

Yet, a small handful of lenders emerged from the ashes bigger and stronger than ever. Those run by prudent bankers with a genuine respect for risk management were in a position to exploit the chaos to their own benefit and to that of their shareholders.

Perhaps no picture illustrates the difference between these conflicting experiences than the following graph, which depicts the growth and destruction of shareholder value at the nation's four largest banks by assets: JPMorgan Chase (NYSE:JPM), Wells Fargo (NYSE:WFC), Bank of America (NYSE:BAC), and Citigroup (NYSE:C). 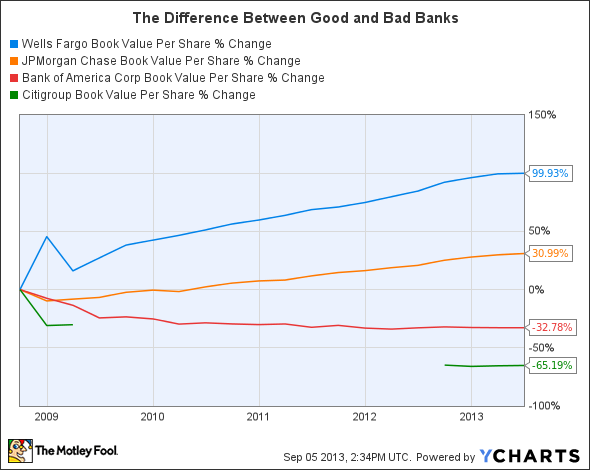 While JPMorgan and Wells Fargo were among the most powerful banks going into the crisis, they've since transformed into veritable behemoths.

JPMorgan picked up Bear Stearns' famed primary brokerage operation and Washington Mutual's expansive branch network and deposit base for pennies on the dollar. And in one fell swoop, Wells Fargo went from being a regional lender to a nationwide mortgage powerhouse, controlling an estimated 30% of the domestic market for home loans via its bargain acquisition of Wachovia.

Meanwhile, Bank of America and Citigroup have been forced to retrench in the face of tens of billions of dollars' worth of losses. Both banks plunged headlong into the subprime mortgage market, and neither emerged unscathed. Bank of America alone has paid out upwards of $50 billion dollars to atone for the previous misdeeds of Countrywide Financial.

The lessons from these divergent experiences remain as apt today as they were five years ago. In the first case, it is a banker's job to manage risk. Every couple of decades, most economies experience some type of financial downturn. Banks led by bankers who don't account for this in the construction of their portfolios will suffer, if not outright fail.

And in the second case, it's always prudent to be wary of a growth-by-acquisition business model. This goes for all companies, but particularly so for banks given that they stand the risk, as Bank of America can attest, of unwittingly acquiring a ticking time bomb.