A chart of the 10 biggest banks in America. Over the last five years, we've witnessed a remarkable trend among the nation's biggest banks. Far from getting smaller in response to concerns about being too big to fail, many of them have gotten larger -- and some of them considerably so.

As you can see in the chart above, a select contingent of lenders has grown to become absolute behemoths. Since the end of 2007, JPMorgan Chase's (JPM 1.66%) balance sheet expanded by 56% thanks to its acquisitions of Bear Stearns and Washington Mutual. Wells Fargo (WFC 1.52%) has nearly tripled since its purchase of Wachovia. And PNC Financial (PNC 1.56%) has more than doubled in size as a result of its National City transaction.

On the other side of the equation, a handful of banks have been forced to retrench in the face of massive losses, shedding assets to boost their capital bases. Citigroup (C 0.70%) is foremost among these. Since the beginning of 2007, its asset base has fallen from nearly $2.2 trillion down to less than $1.9 trillion today. And in a similar vein, Morgan Stanley (MS 1.62%) has shrunk by 28%.

What's been the impact of this on investors? The following chart says it all. 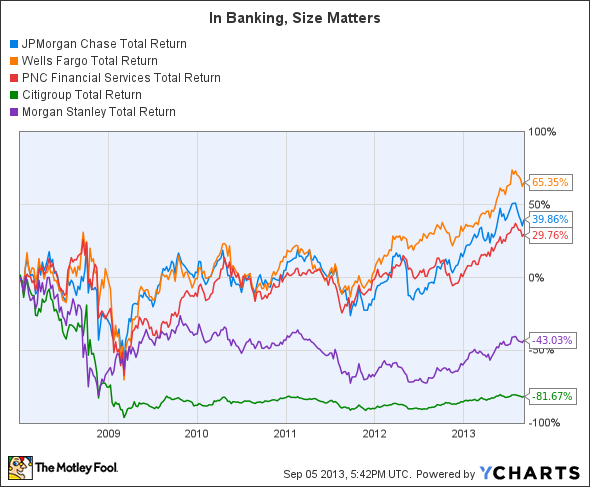 As you can see, the three banks that expanded the fastest have all seen their share prices more than recover since the onset of the crisis. Wells Fargo leads the way in this regard, with a 65% total return since the beginning of 2008, followed by JPMorgan and PNC with returns of 40% and 30%, respectively.

Meanwhile, both Citigroup and Morgan Stanley have floundered in the aftermath. The former's shares have lost more than 80% of their value, while the latter's are down by 43%.

John Maxfield has no position in any stocks mentioned. The Motley Fool recommends Wells Fargo. The Motley Fool owns shares of Citigroup, JPMorgan Chase, PNC Financial Services, and Wells Fargo. Try any of our Foolish newsletter services free for 30 days. We Fools may not all hold the same opinions, but we all believe that considering a diverse range of insights makes us better investors. The Motley Fool has a disclosure policy.