Some thought this announcement would never come. For whatever reason, they just didn't think that LINN Energy (LINEQ) and its offspring LinnCo (NASDAQ: LNCO) were good enough to build a new life together with oil-rich Berry Petroleum (NYSE: BRY). However, for those of us who've supported this pairing since the very beginning, it was great to see the announcement that the date is now set. Mark your calendars for September 30th, which is the new record date for the proposed merger.

Of course, there are a few minor details that need to be worked out and LINN announced that it's working diligently to get all the required paperwork filed in time. But it would appear that barring any last minute setbacks, this deal is about as good as done. Really, it's great news for everyone involved and here's why.

Why this is a great deal for LINN
While LINN certainly survived without Berry, the two are better together than flying solo. For example, without Berry, LINN's all important distribution coverage ratio would be 0.95 times in the fourth quarter. That would be a continuation of the danger zone that has attracted short-sellers to its units. However, with Berry that same ratio would be a much more secure 1.16 times. Clearly, LINN could use the oil-rich cash flow that Berry would provide it.

However, that's not all Berry brings to the table. As the map below shows, the two complement each other quite well. 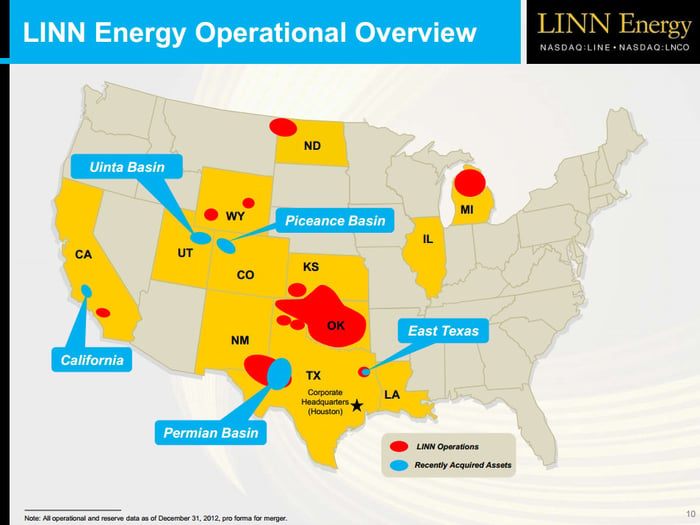 In addition to adding complementary assets in the Permian Basin and East Texas, Berry adds to LINN's operations in California while bringing the Uinta and Piceance Basins into the fold. Diversifying its production and reserves will help to further solidify the distribution. Finally, Berry adds a lot of potential for growth. For example, the combination nearly doubles LINN's drilling inventory in the Permian Basin. Bottom line, Berry is everything LINN could have wanted in a partner and why it has worked so hard to get this deal closed.

Why this is a great deal for LinnCo
LinnCo will enjoy those same benefits and more. First, it will likely become LINN's vehicle to pursue future growth transactions. In addition to public companies like Berry, there are a number of private corporations holding low-decline oil assets that would be a perfect pairing for a LinnCo led exit strategy. That's likely to lead LinnCo's shares to continue to trade at a premium to LINN's. Finally, the tax advantaged income structure, without all of the paperwork headaches of a Schedule K-1, could make LinnCo the go-to stock for income investors.

Why this is a great deal for Berry
Berry investors gain three overlooked advantages in merging with LINN and LinnCo. First, Berry investors will finally start to see a real, tangible return from the assets the company has built over the years in the form of monthly dividends. Sure, Berry could have started paying a dividend or even become its own MLP, but this really is the most efficient way to begin returning cash to its investors. Second, like I mentioned with LINN, the pairing adds tremendous diversification. For example, Berry investors will now be a bit more open to the upside of natural gas, in addition to reducing the risk of being too concentrated in California. Finally, Berry investors are now part of what is one of the best growth and income opportunities in the energy sector by becoming part of LINN Energy. Bottom line, Berry investors that hold on for the long-term should do very, very well.

Final Foolish thoughts
With the date now set, investors can breathe a little bit easier knowing the deal is one step closer to going through. It's also less likely there will be any negative surprises given that we're just three weeks away. Let the countdown begin.

Fool contributor Matt DiLallo owns shares of Linn Energy, LLC and Linn Co, LLC . Matt DiLallo has the following options: short October 2013 $25 puts on Linn Energy, LLC and short November 2013 $25 puts on Linn Co, LLC . The Motley Fool has no position in any of the stocks mentioned. Try any of our Foolish newsletter services free for 30 days. We Fools may not all hold the same opinions, but we all believe that considering a diverse range of insights makes us better investors. The Motley Fool has a disclosure policy.