Apple may not have wowed the market with a cheaper iPhone last week, but that doesn't mean it's done growing.

Apple (AAPL 0.03%)shocked observers on Tuesday by pricing the iPhone 5c at $549 rather than the $300-$400 price point many people expected. In the aftermath, a variety of analysts downgraded the stock, reduced their earnings estimates, or both, sending the stock down 8% from its weekly highs. 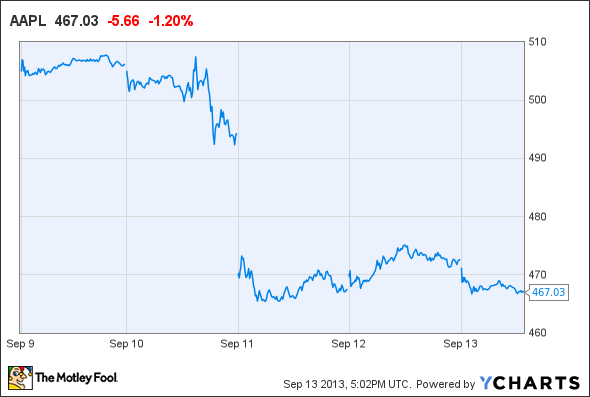 While the high price will probably boost Apple's margins, many analysts are worried that iPhone sales will stagnate because of a lack of innovation and Apple's unwillingness to offer a lower-priced smartphone. However, Apple still has plenty of room to grow its iPhone sales numbers -- even without a cheaper iPhone. The key is expanding distribution: selling the iPhone through more wireless carriers around the globe.

Distribution is crucial
By now, you've probably heard a lot about Apple's two new iPhones: the iPhone 5s and the iPhone 5c. While the hardware is obviously very important, Apple's moves to expand distribution of the iPhone are a critical (and sometimes overlooked) growth driver for the company.

The iPhone 5C was introduced last week, but that may not have been Apple's most important announcement. (Photo: Apple.)

To put this in perspective, pundits have been criticizing Apple for a lack of innovation in its smartphones ever since the iPhone 4s was released two years ago. Despite these complaints, Apple has roughly doubled iPhone unit sales from 72.3 million in FY11 (before the iPhone 4s release) to 143.4 million over the past four quarters.

One of the main drivers of that growth has been the addition of new carrier partners. In the U.S., AT&T (NYSE: T) was still the exclusive iPhone carrier at the beginning of 2011. Verizon (NYSE: VZ) first received the iPhone in February of that year, while Sprint (NYSE: S) began carrying the iPhone when the 4s launched in October 2011. T-Mobile USA (TMUS 0.69%) has had the iPhone only since April of this year, making this the first time it's participating in a global iPhone launch.

Apple has also added carrier partners abroad, such as China Telecom (NYSE: CHA). It's the smallest of China's three major carriers, but it's still comparable in size to Verizon (the largest U.S. wireless carrier). However, Apple has been missing two major pieces in Asia: China Mobile (CHL) and NTT DoCoMo. These two carriers are the largest in China and Japan, respectively.

More carriers, more sales
Sure enough, Apple announced a new partnership with NTT DoCoMo on Tuesday. NTT DoCoMo is by far the largest wireless carrier in Japan, with 61 million subscribers (46% of the market). Even though NTT DoCoMo has not sold the iPhone previously, Apple has already captured around 36% of the Japanese smartphone market.

That performance demonstrates the strength of Apple's brand in Japan. Based on this strong market-share figure, bringing the iPhone to NTT DoCoMo could potentially drive more than 10 million incremental iPhone unit sales in the next year.

However, the NTT DoCoMo news was overshadowed by the lack of a China Mobile announcement. While the vast majority of China Mobile subscribers couldn't afford an iPhone, China Mobile has more than 700 million users! Reaching just 10% of this humongous market would create significant upside for Apple.

Nevertheless, it seems almost certain that a China Mobile deal is coming within the next few months. This week, the Chinese government issued a permit for Apple's new iPhones to operate on China Mobile's network. The exact timing of an iPhone launch on China Mobile will have little impact on Apple's results, as long as it comes within the next six months, because demand routinely outstrips Apple's ability to produce iPhones for the first few months after launch.

Foolish wrap-up
The addition of new carrier partners has been a major growth driver for Apple over the past two years. Apple's recently announced agreement with NTT DoCoMo and the expected agreement with China Mobile should continue to drive iPhone sales higher in FY14. While sales will not grow quite as much as they would have with a sub-$400 iPhone, Apple's margins will be correspondingly higher. That should help Apple return to solid EPS growth next quarter.

Expanding iPhone distribution is just one of the hidden keys to Apple's long-term success. In fact, many of the company's secrets -- the ones that make savvy market watchers rich -- fly below the radar. If you want an edge on other Apple investors, be sure to check out "5 Secrets to Apple's Future" from The Motley Fool. This 100% free guide includes actionable advice that you can put to use right now. Just click here now for instant access!

Fool contributor Adam Levine-Weinberg owns shares of Apple and is long January 2015 $390 calls on Apple. The Motley Fool recommends Apple and owns shares of Apple and China Mobile. Try any of our Foolish newsletter services free for 30 days. We Fools don't all hold the same opinions, but we all believe that considering a diverse range of insights makes us better investors. The Motley Fool has a disclosure policy.