Methane leaks are not such a big deal as they were thought to be, giving the natural gas industry another boost.

In many ways fracking is America's miracle drug. It turned the energy industry on its head. A recent study has found that fears about environmentally damaging methane releases from fracked natural gas wells are overrated. This is good news for the entire industry. It will help it to promote natural gas as a clean fuel, even if has been extracted through fracking.

The methane controversy
According to the EPA, it is estimated that methane is the second common greenhouse gas released by human activity in the U.S. Regardless of your personal beliefs about global warming; low greenhouse gas emissions help to decrease public opposition to drilling.

The previously mentioned study found that the drilling industry can further decrease its methane emissions by making parts and equipment to higher standards. Given that these challenges are not related to the fracking process itself, a little R&D could make natural gas even cleaner.

The drillers
Proving that natural gas is a clean fuel makes it even more attractive for utilities. Drillers like Chesapeake (CHKA.Q) and ExxonMobil (XOM 1.84%) will be some of the biggest beneficiaries from stronger consumption. Oil and gas drillers are continuously criticized for their carbon emissions, and many new techniques like carbon capture and storage have not been commercialized to point where they can significantly decrease industry emissions. Simply using high quality equipment that limits methane emissions at the point of extraction and transportation is a simple and cost effective method.

When ExxonMobil bought out XTO Energy in 2010 for a total of $41 billion it became one of America's top natural gas producers and frackers. In the last quarter alone it produced 11.4 billion cubic feet of natural gas per day or bcfd; more than three times Chesapeake's production. ExxonMobil is a diversified player with refineries, but as of the second quarter of 2013 it made 91.9% of its net income from drilling and upstream activities.

Right now oil shale plays like Eagle Ford and the Bakken are all the rage, but ExxonMobil has a significant amount of natural gas acreage from its XTO acquisition. As natural gas demand grows the price will rise; thus allowing ExxonMobil to bring more of its reserves online in a profitable fashion. The firm has a small debt load and a total debt to equity ratio of 0.12. Higher natural gas prices would allow it to deploy more of its balance sheet within politically stable U.S. borders.

The news that fracking is relatively clean will help out the large natural gas fracker Chesapeake. The company is trying to brand itself as a diversified driller of natural gas liquids and crude oil, but it cannot deny its history. Before the crash in natural gas prices it was the star example of America's natural gas frackers, and this tradition can still be seen in its production.

Its natural gas production is expected to fall slightly in the coming years, but the company managed to produce 3.1 bcfd in the second quarter of 2013. Natural gas was a full 44.6% of the company's total revenue, making it a very significant item. Chesapeake still has a large amount of debt to worry about, with a total debt to equity ratio of 1.02. Rising natural gas prices will help it to clean up its act. Excluding gains and losses on derivatives, in this most recent quarter it received just $2.81 per million cubic feet of natural gas, leaving lots of room for improved pricing. 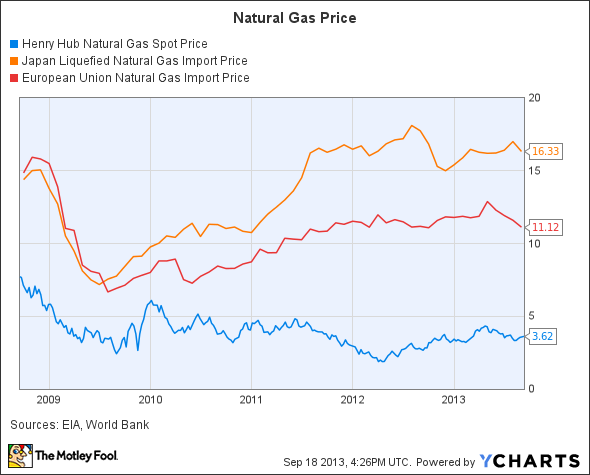 With low methane emissions from natural gas drilling, it will be easier for drillers to maintain a large supply of natural gas. Cheniere depends on the price differentials between the flooded North American market and more constricted Asian and European markets, making U.S. natural gas production a very important factor. Stronger U.S. demand will put upward pressure on natural gas prices, but it is very unlikely that they would rise to Japanese levels.

Conclusion
Drillers are constantly being accused of destroying the environment and creating a global environmental disaster. There is no way to completely remove their impacts on the environment, but the latest data shows that methane emissions are not as prevalent as they were once thought.

By improving equipment drillers like Chesapeake and ExxonMobil will be able to further reduce their emissions and boost demand for natural gas from environmentally conscious consumers. Low methane emissions and strong production levels will benefit U.S. LNG exporters like Cheniere, as it increases the probability that U.S. drillers will keep prices low relative to international levels.

Joshua Bondy has no position in any stocks mentioned. The Motley Fool has no position in any of the stocks mentioned. Try any of our Foolish newsletter services free for 30 days. We Fools may not all hold the same opinions, but we all believe that considering a diverse range of insights makes us better investors. The Motley Fool has a disclosure policy.