How do we know that the market was expecting the Fed to announce a "Sep-taper" of its $85 billion per month bond-buying program (a.k.a. quantitative easing or QE)? Just take a look at how the S&P 500 (SNPINDEX:^GSPC) and the Dow Jones Industrial Average (DJINDICES:^DJI) reacted once the Fed announced it was standing pat at 2 p.m. EDT: 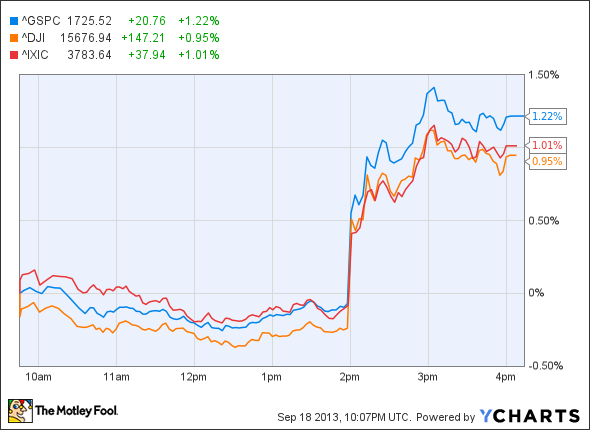 Those gains lifted both indexes to record (nominal) highs. If the Fed took the market by surprise, it was a pleasant surprise for traders -- "The party's not over, boys. There's still some punch to be drunk!" That sentiment was enough to push the CBOE Volatility Index (VOLATILITYINDICES:^VIX) down 6.5% today, to close below 14, with the totality of that decline occurring after 2 p.m. The VIX, Wall Street's "fear index," is calculated from S&P 500 option prices and reflects investor expectations for stock market volatility over the coming 30 days.

On August 21, when the Fed released the minutes of its July meeting, I wrote:

My sense... is that the market consensus view is that tapering will begin next month... However, I think the odds that the taper begins later than that are higher than the market currently anticipates. Roll on the "liquidity rally"!

So why did the Fed decide to postpone its "taper"? There are two key passages in today's statement that explain the Committee's decision. In the first one, I have marked in bold the parts of the sentence that are different from the statement from the July policy meeting (emphasis mine):

The Committee sees the downside risks to the outlook for the economy and the labor market as having diminished, on net, since last fall, but the tightening of financial conditions observed in recent months, if sustained, could slow the pace of improvement in the economy and labor market.

Here, the Fed is referring to the sharp increase in interest and mortgage rates. In the second passage, the central bank takes a swipe at legislators for failing to resolve the "fiscal cliff," in a thinly veiled allusion to imminent political battles relating to the federal budget and the debt limit:

Taking into account the extent of federal fiscal retrenchment, the Committee sees the improvement in economic activity and labor market conditions since it began its asset purchase program a year ago as consistent with growing underlying strength in the broader economy. However, the Committee decided to await more evidence that progress will be sustained before adjusting the pace of its purchases.

Stepping back from the day-to-day market chatter, this month would have seemed a rather odd choice of timing for the Fed to remove monetary accommodation -- just weeks before politicians must pass a new budget and lift the debt ceiling through negotiations that have the potential for a mini-crisis?

We know how short-term investors/traders, who dominate the stock market, reacted to today's decision, but where does that leave long-term investors? I think Yahoo! Finance's Michael Santoli expressed it well yesterday:

The bullish outlook retains the benefit of the doubt and there are still enough skeptics to continue feeding on for some time. Still, anyone expressing a seriously bullish view is implicitly suggesting it culminates in prices for risky assets that will prove excessive and unfavorable for long-term investors over the ensuing cycle. The financial market recovery has been so much stronger and faster than that of the labor and industrial economy that, if the Fed seeks to prolong its easy-money policies, it would almost certainly fuel further financial-market gains and increasingly tough-to-rationalize valuations.

Investors ought to temper their expectations and stock pickers, in particular, need to be very mindful of the valuations they're paying, as opportunities become fewer and farther between.