Subaru’s vehicles just increased sales in the U.S. by an astounding 45%; here are the facts behind the company’s incredible run…

Subaru, the automotive division of Fuji Heavy Industries (FUJHY -1.14%), is on a terrific growth trajectory. It's eyeing 1 million vehicles in annual sales in the not-too-distant future, and it's all happening in the U.S. In the last five years, the U.S. has become Subaru's largest hunting ground, and sales have exploded. Its cars are so spacious and inherently American that people joke that the new Outbacks will not fit in a Japanese parking garage.

The company's success in America has obviously not come from big cars alone. It is the foresight, business acumen, and near-perfect execution of Subaru's management that is enabling the company to scale new heights.

The growth story
The last five years have been a period of heavy growth for Subaru as sales surged 30% to 724,466 in the 2013 fiscal year, up from 555,333 in 2009. Given that this period included the devastating earthquake and tsunami in Japan in 2011 as well the aftermath of the U.S. recession, those numbers are quite impressive. They remain impressive even when compared to Japanese auto majors like Toyota (TM -0.65%) and Honda (HMC -1.03%).

The period between 2009 and 2013 was also when Subaru focused on developing its U.S. market. Being the second largest automotive market in the world, automakers from everywhere target the U.S. to establish their global footprints. The market is dominated by stalwarts like GM, Ford, Toyota, and other biggies, but this did not deter Subaru. It grew its sales by a whopping 88% in North America, again a feat unmatched by its Japanese rivals.

Given the political tension between China and Japan that holds back Japanese automakers in China and the economic downturn in Europe, the importance of the North American market cannot be emphasized enough.

Striking where the iron is "hottest"
It has not been an easy task for Subaru to carve a niche for itself in the U.S. Management needed a solid strategy and a good opportunity. It was quick to spot its chance in a transition that is currently rocking the U.S. auto scene. American buyers are ditching their SUVs and minivans and increasingly opting for the new automotive wonder -- the crossovers.

Crossovers appeared about two decades ago. Since then, they have come to account for 25% of the total market volume. According to AutomotiveCompass, crossovers are expected to be the fastest-growing car segment in the world over the next five years.

Once it realized the market potential, Subaru management discontinued the production of mini vehicles in its Japanese facilities in February 2012. This allowed the company to pour all of its resources into its top-class crossover models. The recently refurbished Forester and Outback appeal to the tastes of American buyers like never before. The result: a 45% year-over-year sales increase to 41,061 cars in August.

Consolidating strengths
A big part of Subaru's U.S. plan has been to keep its prices competitive. This is a huge challenge given that it does not have the scale economies of its larger peers. The chart below shows the average price fetched for a Subaru Forester compared to other popular crossovers according to a U.S. News Best Car survey.

Subaru has managed to keep its vehicles affordable without resorting to heavy incentives or compromising on margins. Bloomberg Industries data shows that Subaru's monthly incentives have averaged just $557 in 2013. This is about 20% of the industry standard. The automotive website TrueCar.com estimates average industry incentives to have been around $2,477 in August. Meanwhile, Subaru's operating margin during the first quarter (April - June) was a majestic 12.7%. Anything above 10% in auto industry is considered excellent.

The yen depreciation has definitely played its part by lowering production costs in Japan, but what has really done the trick for the company is its impressive operating efficiency. Subaru's two main Japanese plants are running at full capacity, and resource utilization is optimal.

Going forward, instead of taking the capital-intensive route of building another plant, management intends to increase its production capacity by another 130,000 vehicles within the next three years through equipment and technology upgrades. This will make operations even more efficient, allowing Subaru to maintain its prices. 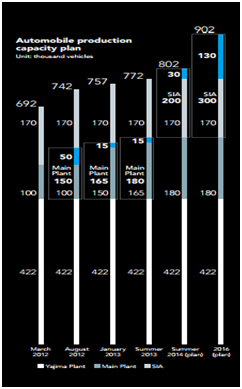 Investment proposition
In the last five years, the prices of Subaru's parent Fuji Heavy's American Depositary Shares (ADS) have increased fourfold. Toyota and Honda have also earned good value for their investors, but their numbers pale in comparison to Fuji Heavy.

As Subaru continues to grow its business on the back of solid demand for its vehicles, investor optimism is going to increase further and bring in more gains to the stock price. Fuji Heavy has also been generating far better returns both on its assets as well as equity compared to its bigger peers, making it an attractive investment option.

Parting thoughts
Subaru is the fastest-growing non-luxury car company in the U.S. Its fantastic growth rates have earned it celebrity status in the U.S. automotive circuits. And all of this has been possible on account of its smart strategies and efficient management. The decision to focus on crossovers in the U.S. has paid off big time and will continue to bear fruit in the future. Subaru's operating discipline is also noteworthy and is providing excellent support to its growth plans. The company has been making its investors happy, a trend that should continue into the foreseeable future.

Gaurav Basu has no position in any stocks mentioned. The Motley Fool has no position in any of the stocks mentioned. Try any of our Foolish newsletter services free for 30 days. We Fools may not all hold the same opinions, but we all believe that considering a diverse range of insights makes us better investors. The Motley Fool has a disclosure policy.