Please ensure Javascript is enabled for purposes of website accessibility
Log In Help Join The Motley Fool
Free Article Join Over 1 Million Premium Members And Get More In-Depth Stock Guidance and Research
By Justin Loiseau - Sep 26, 2013 at 12:00AM

The Pending Home Sales Index fell 1.6% to 107.7 for August, according to a National Association of Realtors (NAR) report released today .

After dropping a revised 1.4% for July, analysts had expected another month of declines, but their 1% estimated decrease ultimately proved overly optimistic. Compared to August 2012, however, pending home sales are still up 5.8 %. 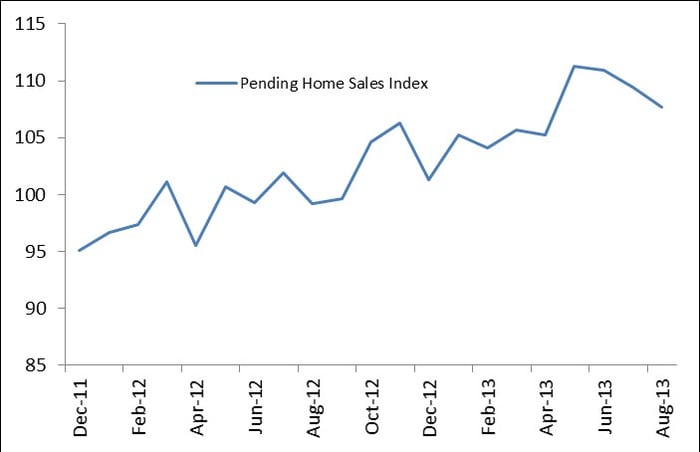 The index is based on contract signings (with sales usually finalized one or two months later), and is benchmarked to 2001 contract activity. (An index of 100 is equal to the average level of contract activity during 2001, which was the first year the association examined data).

NAR chief economist Lawrence Yun noted that these latest dips are to be expected as higher mortgage rates take their toll on the market. "Sharply rising mortgage interest rates in the spring motived buyers to make purchase decisions, culminating in a six-and-a-half-year peak for sales that were finalized last month," Yun said in a statement today. "Moving forward, we expect lower levels of existing-home sales, but tight inventory in many markets will continue to push up home prices in the months ahead."

Looking ahead, the NAR expects the median existing-home price to increase around 11.5% for 2013 overall , while existing-home sales are expected to rise 11% for the year .

Fool contributor Justin Loiseau has no position in any stocks mentioned. You can follow him on Twitter @TMFJLo and on Motley Fool CAPS @TMFJLo.