An essential part of a successful beer company is creating recognizable, reliable brands. Craft Brew Alliance (NASDAQ:BREW) is one of the smaller publicly owned beer companies on the market, but it has been taking steps to improve its high-quality beer brands.

On the hook
Craft Brew Alliance has been building its Redhook brand through partnerships with Buffalo Wild Wings (NASDAQ:BWLD) and The Chive.

Launched on July 15, 2013, Redhook Game Changer was the fourth highest-selling draft beer in Buffalo Wild Wings' corporate owned stores. The beer's taste was designed to accompany wings and is not too heavy or high in alcohol content, so it can be consumed throughout the duration of a football game. While Game Changer is not exclusive to Buffalo Wild Wings, the cross promotion between the restaurant and brewer has been mutually beneficial so far. Craft Brew Alliance recently gave Buffalo Wild Wings its on-premise Retailer of the Year Award, which shows the company's satisfaction with the new partnership. More positive information on Game Changer should appear as the football season continues and quarterly reports are announced.

In addition to Buffalo Wild Wings, Craft Brew Alliance has partnered with Resignation Brewery, a company backed by The Chive, to make KCCO Black Lager. This lager is set for release in the fourth quarter of 2013. KCCO is a pop culture slogan that stands for "Keep Calm and Chive On." The Chive is the world's largest photo entertainment website, and receives roughly 3.5 million visitors a day and 22.1 visitors a month. Partnering with the website will get Redhook additional exposure in the markets with the most "Chivers."

These partnerships are improvements to Craft Brew Alliance's advertising strategy. The company has spent less on advertising than competitors like the Boston Beer Company (NYSE:SAM). 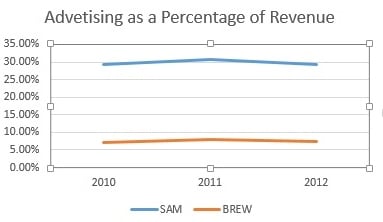 Branding the brothers
Despite high growth in brands such as Kona, Redhook, and Omission, Craft Brew Alliance's high-margin brand Windmer-Brothers has recently experienced soft volume growth of 1%. This can be mainly attributed to the continued decline of Hefeweizen and the discontinuation of Drifter Pale Ale, which account for 80% of the brand's second quarter decline.

The company has made steps to reshape the brand by introducing Alchemy Ale as a replacement for Drifter. Alchemy Ale was released in April and has since accounted for 50% of Widmer-Brothers' gains.

The company also redesigned the packaging to feature unique looks for each type of Widmer-Brothers beer. The new designs all feature the Windmer-Brothers signature "W," which acts as a constant brand mark across all of the brewery's products.

The rebranding and repositioning of Windmer-Brothers beers will mean short-term softness for Craft Brew Alliance. However, hopefully this will reverse the Hefeweizen decline and lead to greater overall sales for the brand.

Conclusion
Craft Brew Alliance has made steps to develop its Redhook and Widmer-Brothers products through cross promotion and rebranding. The company understands that having strong brands to go along with great beer is crucial to success in the beer industry. Redhook and Widmer-Brothers' are just two of Craft Brew Alliance's quality beers, and I think the company has a strong long term plan to grow them over the coming years.