Please ensure Javascript is enabled for purposes of website accessibility
Free Article Join Over 1 Million Premium Members And Get More In-Depth Stock Guidance and Research
By Adam Levine-Weinberg - Oct 28, 2013 at 11:17AM

Boeing's Q3 earnings were boosted by an "accounting trick" that improved the Dreamliner's profit margin. That doesn't mean investors should be worried, though.

Last week, Boeing ( BA 3.72% ) reported better than expected third-quarter-earnings results, with core EPS (which excludes pension costs and special items) rising to $1.80. Meanwhile, Boeing was also able to lift its full-year guidance for core EPS from a $6.20-$6.40 range to a $6.50-$6.55 range. This good news sent the stock soaring to a new all-time high. 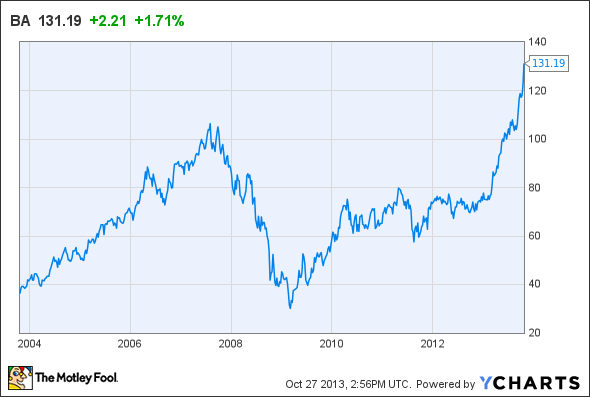 The biggest factor in Boeing's earnings beat was something that could best be described as an accounting trick. The company increased the accounting block for the 787 Dreamliner, a maneuver that boosted Boeing's operating margin -- as I will explain in more detail. Yet even without this accounting trick, Boeing had plenty of good news to report.

Program accounting
As my colleague Daniel Ferry explains, Boeing uses an accounting technique called "program accounting" to measure costs for each airplane family. When Boeing introduces a new model, it sells it for significantly less than the initial production cost. However, production costs tend to drop fairly dramatically over time as Boeing and suppliers learn how to build the planes more efficiently. Increases in the production rate also help reduce Boeing's costs.

Program accounting smooths out these typical changes in profitability over time. Rather than reporting losses on the first few hundred aircraft it sells and big profits on subsequent deliveries, Boeing estimates the total profit it will earn over the life of the program and then assigns a portion of that profit to each plane it sells. These estimates depend heavily on how many airplanes Boeing plans to sell.

A new accounting block
During Q3, Boeing increased the accounting block for the 787 Dreamliner from 1,100 to 1,300, due in part to the launch of the larger 787-10 version back in June. In other words, Boeing now assumes that it will sell 1,300 Dreamliners over the life of the program.

By adding 200 planes to the end of the production block (when the 787 will be at its most profitable), Boeing increased its expectations for the program's total profit. While development of the 787-10 also increased Boeing's costs, the net result was still an increase in the program's profit margin. Under the rules of program accounting, some of that extra profit gets assigned to the 787s Boeing is currently delivering, allowing Boeing to report a higher profit margin.

Trick or treat?
Thus, while Boeing did post a good performance last quarter, the main reason it beat analysts' expectations was the addition of 200 planes to the Boeing 787 accounting block. Investors don't need to panic, though, because the 787 sales goal is still quite conservative!

In other words, the long-term market for the Dreamliner is far bigger than even the revised 1,300 unit accounting quantity. As Boeing works through its backlog -- which already fills almost all of its production capacity through the end of the decade -- and takes new orders, it will eventually be able to lift its accounting quantity yet again. This will provide another big boost to Boeing's profit margin sometime down the road.

Smooth sailing
So far, it looks like Boeing has not been damaged by the Dreamliner's reliability issues. Customers are continuing to order the Dreamliner in large numbers, particularly due to the launch of the larger 787-10. Meanwhile, the re-engined 737 MAX has also been a big seller, helping Boeing boost its order backlog to a record $415 billion.

With Boeing expected to launch yet another redesigned airplane -- the 777X -- later this year, the company's sales momentum should continue. Many customers have expressed interest in the 777X, which will be an ideal replacement for the large number of older, fuel-guzzling 747s still in use.

Boeing's higher earnings and guidance may have been the result of an accounting trick. However, that doesn't mean that Boeing is overstating its earnings. In fact, Boeing is still underestimating the Dreamliner's potential for accounting purposes. As Boeing's order backlog continues to grow, investors can expect plenty of additional revenue and margin growth.