The California gold rush in the mid-1800's was similar in many respects to the dot com bubble of the late 1990s. With the exception (mostly) of the violence as men fought over their stakes, a lot more people ended up with less than they started with versus how many actually found their fortunes in northern California. So what does this have to do with investing today, and what can Levi Strauss teach us about Twitter (NYSE:TWTR)? Let's take a closer look.

It's usually not about striking gold

Levi Strauss followed the gold rush to California in 1853, but never with the intent to strike it rich prospecting for gold or silver. And the trademark jeans the company is famous for didn't exist for another 20 years, not being patented until 1873. He simply came to fill a niche, selling dry goods to the residents of San Francisco, including miners.

And as history tells us, it's rarely those who are looking for gold who strike it rich. More than 160 years later, the company Strauss founded is still owned by his family. It has made countless generations of Strausses (actually Sterns, as the company was inherited by the sons of Strauss' sister) wealthy.

A new world of interaction
And as Levi Strauss filled a niche with his dry goods store, and then the riveted jeans that became as important to the American West as a Colt revolver and a good horse, Twitter, Facebook (NASDAQ:FB), LinkedIn (NYSE:LNKD.DL), and of course Google (NASDAQ:GOOGL) have all proven to offer something specific to their target audience. So much of the way we engage with and interact with the world has moved online, and all of these outlets offer something a little different from the other.

The really powerful aspect of all of these companies is something similar to Strauss' original dry goods store. As with LinkedIn, its customers are largely companies and recruiters that are prospecting -- in this case for new talent. Its members are the suppliers, with a good to offer; in this case, largely themselves. As how Strauss connected those prospecting for gold with many of the things they needed in order to do so, LinkedIn facilitates both parties finding one another. But LinkedIn goes one step farther.

Each member is able to connect with colleagues, and expand their sphere of connections, over time, this strengthening of the network effect -- each new member adding value for other members -- has made LinkedIn into a near necessity for many working professionals.

Similarly, Facebook (in a more social versus professional setting) has created a way for people to connect, and has done an amazing job of both increasing advertising revenue (the key for its success) while also keeping users engaged. Its initiative to expand into developing markets via "Facebook for Every Phone" is a powerful initiative to provide Facebook access to people with no other way to access the Internet, and free of charge.

Google's ubiquitous search is still the backbone of the company, but all of its other offerings, including Google Apps, Android, and YouTube which are free to users, are tied to providing people access to information, and in exchange connecting advertisers with potential customers.

Don't get stuck serving a market in decline
As with Levi Strauss, the best way to make money in a gold rush isn't to prospect for gold, but to provide resources for those doing the prospecting. And just as Strauss' dry good business and riveted denim jeans outlasted the California gold rush, these four companies all have staying power in what they offer their users, customers, and subscribers. In case you don't see any room for these companies to each continue to grow, I'll leave you with this table: 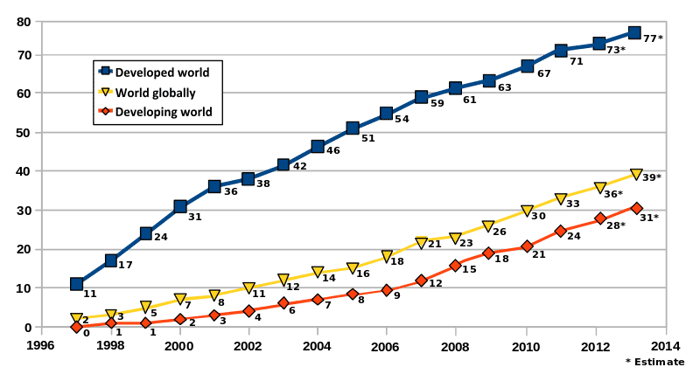 Final thoughts: The "knowledge economy" and getting the rest of the world online
In a recent interview with wired.com, Facebook CEO Mark Zuckerberg had this to say:

The story of the next century is the transition from an industrial, resource-based economy, to a knowledge economy ... If you know something, then you can share that — and then the whole world gets richer. But until that happens, there's a big disparity in wealth. The richest 500 million have way more money than the next 6 billion combined. You solve that by getting everyone online, and into the knowledge economy — by building out the global Internet.

The world's population will increase by one billion people in less than 15 years, and primarily in developing countries. As the world gets bigger, these companies will be at the center of making it smaller, expanding the knowledge economy while growing themselves. There's little reason to expect this trend to reverse. Invest accordingly.