In years to come, it's possible that outdoor and sporting clothing company VF Corp's (NYSE:VFC) last quarter could become a trivia question. Throughout the last two years, quarter after quarter, VF has raised its full-year earnings guidance. So what will the market do with the stock when it fails to do so?

The answer is that it will mark it higher, because VF kept guidance unchanged but disclosed that it would spend an additional $40 million, or $0.25 of earnings per share, on marketing its key growth brands. The full-year EPS guidance of $10.85 was kept the same as well. While all of this is good news, the stock is up over 41% year-to-date. Is there further room for VF to run?

Good value vs. Nike and Lululemon

Eagle-eyed readers will note that VF currently trades for nearly 20 times its 2013 guidance. This doesn't look cheap on an absolute basis, but it still trades at a discount to peers Nike (NYSE:NKE) and yoga gear company Lululemon Athletica (NASDAQ:LULU). 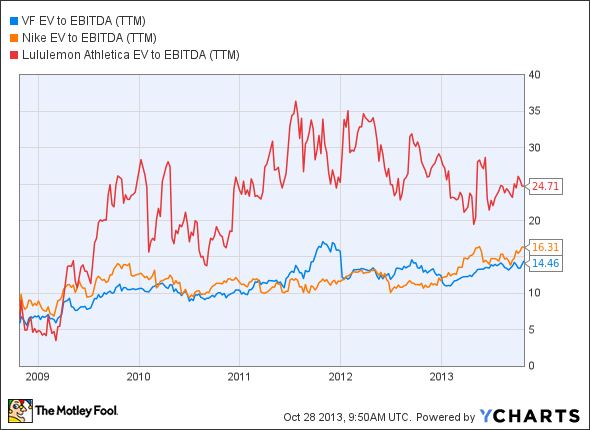 The key advantage that VF has over these companies is diversification. Nike is a fantastic business, but it's increasingly reliant on North America and footwear for its growth. Going forward, Nike needs to address its underperformance in China as it tries to strategically reset its business there. For example, Nike generates four times as much in earnings from North America as it does from China. Moreover, in its last results its futures orders from North America were 11%, compared to just 2% from Greater China.

As for Lululemon, the company is very focused on selling premium products in the yoga category. It doesn't offer much diversification and it's susceptible to encroaching competition. In addition, Lululemon has had to deal with some quality issues with its black yoga pants (one of its top selling items) this year. An issue that highlights how hard it is to preserve premium prices in a competitive market. It's one thing to build a lifestyle cache around a brand, but at the end of the day it is still basically selling expensive yoga pants. On a forward P/E ratio of over 27 times earnings, the stock is hardly cheap.

VF Corp's upside potential
Frankly, VF needs some upside earnings catalysts. The good news is that it has at least five of them!

First, the weather might be more helpful this year. VF's outdoor & action sports coalition (58.1% of 2012 total coalition profit) contains three major brands, of which The North Face--and to a lesser extent Timberland--see stronger sales when winters are colder. While Europe saw a cold winter last year, the last two years have seen mild winters in the US. Retailers have been cautious with inventories going into this holiday season. In other words, if there is a cold winter this year, then investors can look forward to some pricing upside because retailers' inventories could turn out to be too lean.

The second upside catalyst is that VF is innovating its major brands in order to broaden their appeal. For example, in an attempt to make The North Face less of a winter-focused brand, VF has launched training apparel and some new collections for the spring season. In addition, Timberland has seen an increased focus on apparel to diversify away from a reliance on footwear.

Third, VF has a margin expansion opportunity by growing its direct to consumer, or DtC, sales. DtC sales (comprising things like its own store and e-commerce sales) increased 14% in the quarter, and now make up 19% of total sales. They obviously come at a higher margin than sales via retail channels. Furthermore, the higher-margin outdoor & action sports coalition grew sales by 6.5%, compared to 4.7% for the total company.  A combination of these two factors saw gross margins expand by 90 basis points to 47.6%.

Fourth, the increased investment of $40 million in the second half should increase revenues. Furthermore, the bulk of this investment is going into higher-margin areas. From the conference call:

"With a focus on The North Face, Vans and Timberland, 80% of the spend is in Outdoor & Action Sports. And about 70% positioned outside the U.S. and heavily D2C weighted."

And finally, VF still has significant opportunity to expand internationally. For example, Vans revenue was up a remarkable 25% in Europe, and its jeans-wear coalition (26.6% of 2012 total coalition profit) has long-term growth opportunities in China (particularly with the Lee brand) even if it's still dealing with some excess inventory issues.

Where next for VF Corp?
On its current valuation, the stock is starting to look fairly valued. However, analysts should start upgrading next year's estimates due to the increased marketing spend this year. Moreover, a cold winter and continued excellent execution with its DtC initiatives will lead to increases in growth

VF may be fairly valued, but with analysts forecasting mid-teens earnings growth the stock can appreciate from here. Just keep an eye on the weather.