NextEra Energy (NYSE:NEE) nailed this quarter's earnings report. While it missed on its top line, the utility beat on its bottom and upped its expectations for fiscal 2013. But with shares near all-time highs, let's take a closer look to see where this dividend stock is priced for perfection.

The numbers
On the top line, NextEra Energy's revenue clocked in at $4.39 billion, a major improvement over its 2012 Q3's $3.84 billion in sales. But analysts had been expecting $4.42 billion in revenue, and were slightly disappointed by the news.

Yet where NextEra Energy neglected to meet expectations on the top, it exceeded them on the bottom. Adjusted earnings per share came in at $1.43, a solid $0.03 above estimates.

On numbers, at least, NextEra's third-quarter report doesn't quite match up to Exelon's (NYSE:EXC) earnings. Exelon managed to pull in $6.5 billion in revenue, $200 million above expectations. But Exelon truly excelled on its bottom line, with adjusted EPS of $0.78 beating analysts' predictions by a whopping $0.12. After both utilities' reports came in, Exelon is still trading at a trailing 12-month P/E of 15.3, compared to NextEra Energy's 18.5.

But quarters are just quarters, and it's important to keep a long-term perspective. Here's how NextEra Energy's sales and adjusted EPS have fared over the past five years: 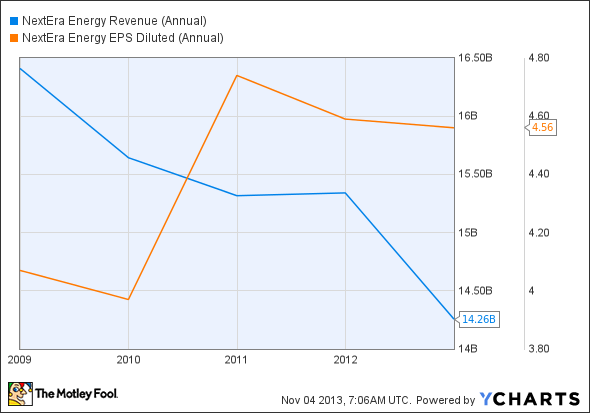 The utility seems to be making more from less, with adjusted EPS up 12% despite a 13% drop in sales.

Beyond the numbers
NextEra Energy is comprised of both competitive and regulated subsidiaries. Its regulated utility, Florida Power & Light, saw net income expand a seasonally adjusted $30 million to $422 million, to make up about two-thirds of the corporation's overall earnings.

A big reason for Florida Power & Light's success stems from its regulated approval of 11% return-on-equity, an above-average percentage in the area. TECO Energy's (NYSE: TE) Tampa Electric regulated utility only recently received approval to boost its own return-on-equity to 9.25% to 11.25%. TECO Energy missed on both its top and bottom lines this quarter, but its new rates and a natural gas acquisition have helped put the company back on investors' buy radars.

On the unregulated end, NextEra Energy saw adjusted EPS add on $0.07 from Q3 2012 to reach $0.45. NextEra Energy's success comes from a mix of cheap natural gas and calculated renewable energy investments. The company's got 125 MW of Canadian wind projects under way and has been building up an 800 MW backlog of contracted solar projects.

While NextEra didn't make any major moves with natural gas this quarter, its $3 billion joint-venture natural gas pipeline project with Spectra Energy (NYSE:SE) continues to be a big reason for its soaring stock price.

NextEra and Spectra Energy are hoping for regulatory approval by the end of the year, paving the way for Florida's third major pipeline and unprecedented transmission opportunities. The state commission approved an increase in gas transportation capacity for Florida Power & Light last week, an "essential first step," according to CFO Moray Dewhurst. 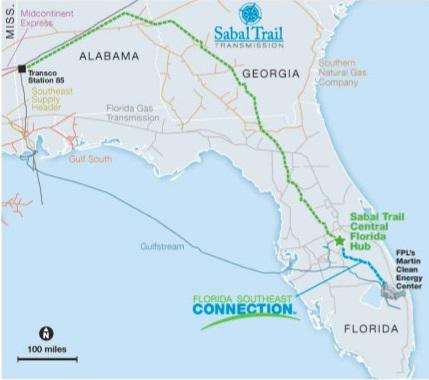 Looking ahead, NextEra Energy upped its 2013 guidance to $4.70-$5.00, the upper end of its previous guidance. Over the next three years, that should translate to a 5% to 7% compound annualized growth rate through 2016.

Priced for perfection?
NextEra's doing everything right. Rock-solid regulated sales and new natural gas and renewable projects have put this utility in growth mode -- all while maintaining a decent 3% dividend yield. But since 2012, NextEra Energy stock has jumped 50%, compared to just 12.5% for the Dow Jones U.S. Utilities Index. 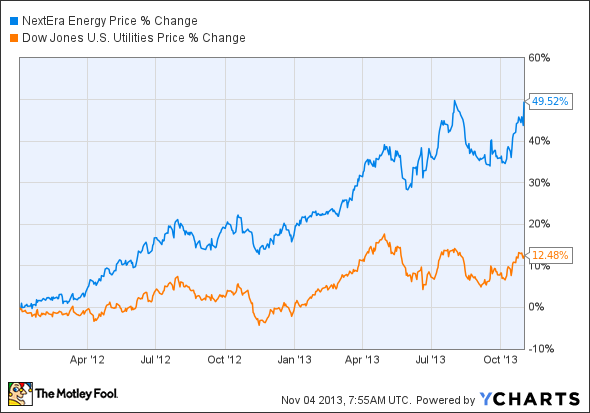 I've had an "outperform" call on my Motley Fool CAPS page since August 2012-and it's fared quite well. And while I'll keep rooting for NextEra Energy's continued success, you won't see me doubling down at these prices.