Exelon (NYSE:EXC) is excelling. The utility released its Q3 earnings this week, blowing away expectations. With shares down 20% in the past year, let's see dive deeper to see whether this latest news makes Exelon stock a trick -- or a treat.

The numbers
Exelon reported operating revenues of $6.5 billion, down 1.2% year over year but still beating estimates by $200 million. On the bottom line, Exelon beat last year's Q3 and blew away analyst estimates.

As earnings season heats up for utilities, bottom-line beats may be a common trend. Xcel Energy (NYSE:XEL) marked its sixth straight quarter of earnings beats, squeaking ahead of expectations by a penny. Unlike Exelon, Xcel managed to push up sales by a seasonally adjusted 3.6%, but analysts had been hoping for even more.

Exelon's top and bottom line diverged sharply in the last year as the company merged with Constellation Energy to theoretically double its sales. But utilities have been hit with tough times, and scaling up hasn't boosted Exelon stock's bottom line accordingly.

The same can be said for Duke Energy's (NYSE:DUK) merger with Progress Energy. While Duke Energy's new partnership went heavy on assets and light on added revenue, the utility has actually fared relatively better on both its top and bottom line. But neither Exelon nor Duke Energy has seen its sales and profits fly high this past year. 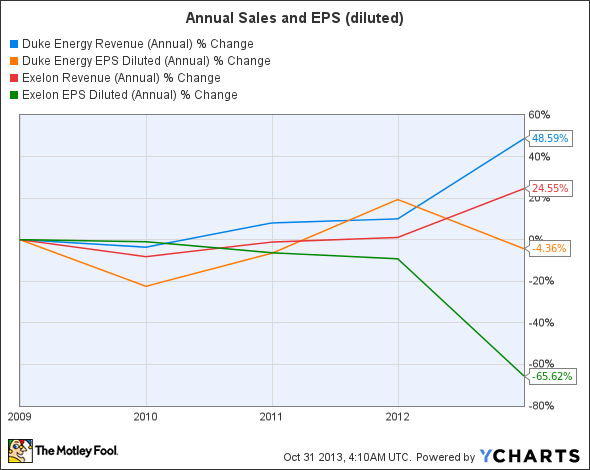 Beyond the numbers
While CEO and President Chris Cane had no trouble calling his company's latest quarter "strong" with "great performance" operationally, he was also quick to remind investors that Exelon stock might not be ready to soar just yet. Sectorwide, low commodity prices, low load growth, and challenging retail margins have kept budgets tight in the past few years.

Cheap natural gas prices have hit Exelon especially hard, and the company has been hedging up a storm to keep its nuclear-centric energy portfolio competitive. The company's open gross margin took a $150 million hit, but Exelon's hedge position helped keep that reduction to $50 million from last quarter .

Exelon's three regulated utilities accounted for just over 40% of this quarter's earnings, and the company generally continues to enjoy steady sales and earnings from these subsidiaries. Higher rates added on $0.07 over last year's third quarter earnings, and Exelon expects other rate requests to flow smoothly over the next few months.

Can Exelon keep it up?
Exelon stock is down nearly 50% in the past five years and 20% in the past 12 months alone. But yesterday's report marks the company's largest quarterly earnings beat since Q1 2011, and Exelon stock headed 1.8% higher throughout the day.

Exelon isn't roaring ahead on natural gas like some of its competitors -- but it's proved it can weather the storm through regulated wins and strategic hedges. Its lagging shares have put Exelon stock in value territory, and its sustainable 4.4% dividend yield fattens the deal for investors. I made an "outperform" call on my Motley Fool CAPS page last December, and this latest report adds to my confidence that Exelon stock is ready to excel.