Please ensure Javascript is enabled for purposes of website accessibility
Log In Help Join The Motley Fool
Free Article Join Over 1 Million Premium Members And Get More In-Depth Stock Guidance and Research
By Justin Loiseau – May 6, 2013 at 1:59PM

It's been a year since Exelon (EXC -1.06%) merged with Constellation Energy to become the nation's largest competitive integrated energy provider. Economies of scale can provide a simple solution to maximize margins, but synergies aren't always what they're made up to be. Let's see how this utility's union is doing.

Happy birthday to you(tilities)
Q1 results are in, marking the last quarter before Exelon stock put Constellation on its books. At the time of its merger, Exelon released a fact sheet comparing the two companies 2011 assets and revenues as a teaser for market share and profits to come:

According to 2011 statistics, Constellation's addition would more than double sales, but also increase assets by a substantial 25%.

Exelon's March merger was followed close behind by Duke Energy's (DUK -2.50%) Progress Energy merger. Another mega move, this merger turned Duke into the largest U.S. utility by asset class. Not to be left behind, the company produced its own fact-sheet for income-hungry investors: 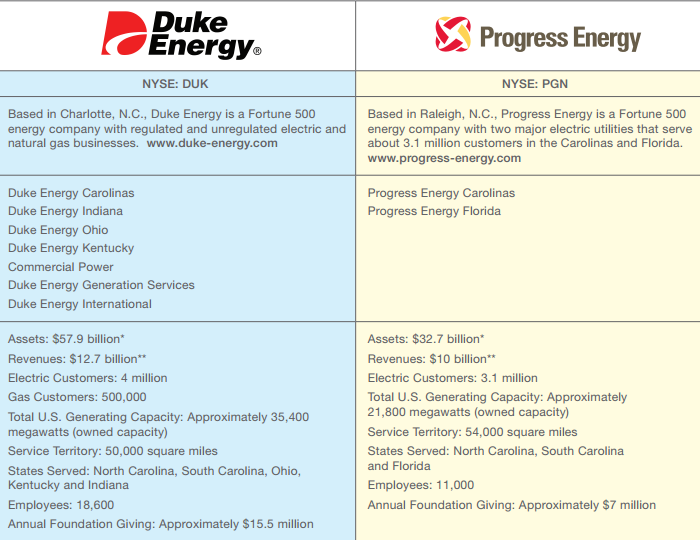 With Q1 earnings hot off the press, Duke's assets have progressed beyond Progress' projections, but sales haven't lived up to expectations.

Are mergers worth it?
Exelon stock and Duke stock both lay claim to "largest utility" titles, but there are plenty of behemoths already around. As a quasi-control group, let's compare adjusted EPS growth between Exelon, Duke, FirstEnergy (FE -1.44%), National Grid (NGG -3.83%), and American Electric Power (AEP -2.90%). For Duke and Exelon stock, we'll compare year-over-year Q1 growth to 2012 annual growth for FirstEnergy and National Grid. Here's how the companies compare:

For investors, Duke and Exelon's mergers haven't hit home for EPS. However, FirstEnergy's and American Electric Power's results show that they aren't alone when it comes to recent rough patches. With the smallest assets around, National Grid has managed to pull up adjusted EPS 14% in its most recent report.

Do mergers maximize wealth?
Anxious investors were salivating for major margin gains this quarter, but mergers don't make money overnight. As Exelon's CEO Christopher Cane recently said, "2012 was a difficult year on the economic front for our sector." Exelon's merger added much-needed diversity to its generation fleet, while Duke enjoys steadier sales from an influx of regulated subsidiaries.

Q1 results are in, but the jury's still out on the ultimate earnings from Exelon's and Duke's mergers. Size is no replacement for excellent management and competitive advantage, and investors would do well to consider more than size alone when picking their next dividend stocks.

Motley Fool contributor Justin Loiseau has no position in any stocks mentioned, but he does use electricity.

The Motley Fool recommends Exelon and National Grid plc (ADR). Try any of our Foolish newsletter services free for 30 days. We Fools may not all hold the same opinions, but we all believe that considering a diverse range of insights makes us better investors. The Motley Fool has a disclosure policy.