Celgene (NASDAQ:CELG) recently reported its third-quarter earnings, topping analyst estimates on its top and bottom line growth. The company, which has seen its shares climb more than 100% over the past 12 months, reported diluted earnings of $1.56 per share -- a 21% year-over-year gain that topped the Bloomberg consensus estimate by $0.02. 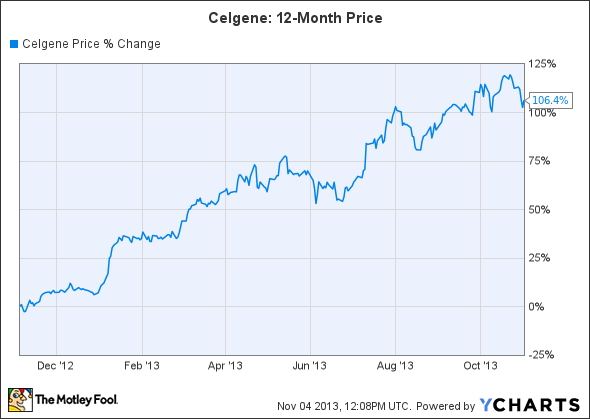 Revenue climbed 18% to $1.67 billion, also higher than the analyst forecast of $1.60 billion. Below is a summary of the sales growth of Celgene's drug portfolio during the third quarter.

Celgene's story remained mostly unchanged from the second quarter, with Revlimid and Abraxane as the biggest contributors to its top line. Sales of Abraxane have risen considerably in the U.S. over the past year, thanks to its approval for non-small cell lung cancer or NSCLC, during the fourth quarter of 2012.

Meanwhile, sales of Vidaza remained flat due to generic competition, and sales of Thalomid continued declining due to safer alternative treatments to its wide array of orphan indications.

This means that my original concerns about Celgene being too top-heavy and undiversified for a big biotech still remain relevant. A promising trial that would have expanded Revlimid as a first-line treatment for B-cell chronic lymphocytic lymphoma, or CLL, was cancelled in June after a high mortality rate occurred. There is currently only one approved first-line treatment for B-cell CLL on the market -- Roche's top-selling drug Rituxan, which generated $7.5 billion in sales last year.

Greater and greater expectations
That brings us to two other points that Celgene investors should notice -- its P/E and P/S valuations, which have both risen dramatically over the past year. 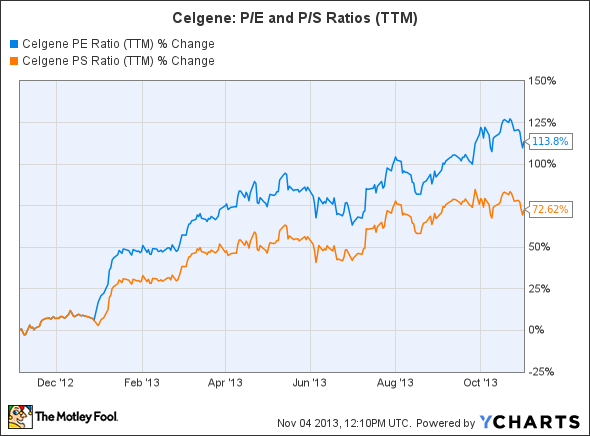 Since both top and bottom line expectations are getting high, an earnings miss could end the stock's meteoric rise. For now, Celgene's top line is very well protected -- Revlimid is covered by 12 patents, which expire between 2019 and 2026, and has impressive pricing power at a cost of $160,000 per patient per year.

However, that doesn't mean that Celgene intends to rest on its laurels with only two real sources of revenue growth. To diversify away from Revlimid and Abraxane, Celgene is aiming to enter the inflammatory drugs market with its orally administered treatment for psoriasis and psoriatic arthritis, Apremilast.

Approximately, 7.5 million people in the U.S. suffer from psoriasis, an autoimmune disease which increases the growth cycle of skin cells. 30% of psoriasis sufferers also develop psoriatic arthritis, an inflammation of the joints.

Will apremilast be a blockbuster or a bust?
Celgene has a fairly optimistic view for the future of apremilast, projecting annual peak sales of $1.1 billion to $1.75 billion.

During a phase 3 trial back in March, a third of the patients given apremilast showed a 75% reduction in psoriasis in comparison to a placebo. However, that was considerably less than the 41% that had shown the same reduction of psoriasis during an earlier phase 2 trial -- which indicated that the drug might not be an attractive alternative to market dominating biologics from AbbVie (NYSE:ABBV), Johnson & Johnson (NYSE:JNJ), and Amgen (NASDAQ:AMGN).

Fortifying its position with four palaces
Since then, Celgene has completed three phase 3 trials (PALACE 1,2, and 3) that compared apremilast to a placebo in psoriatic arthritis patients who had previously been treated with other DMARD (disease-modifying anti-rheumatic drug) treatments and biologics.

According to those trials, 31.3% of patients who had been dosed with apremilast showed a 20% improvement in the signs and symptoms of psoriatic arthritis within the first 16 weeks of treatment, while 63% showed improvement after 52 weeks.

With those three trials, Celgene demonstrated that apremilast could be a viable treatment after other treatments had failed.

A fourth phase 3 trial, PALACE 4, went back and tested apremilast as a treatment for patients who had not undergone previous DMARD and biologic therapy. Celgene announced in May that the trial met its primary endpoints. At the end of October, Celgene provided an update that stated that 60% of patients in the trial had shown improvement after 52 weeks.

Therefore, apremilast could also become a viable first-line treatment for psoriatic arthritis, coming before the higher-priced second-line biologic treatments Humira, Remicade, and Enbrel, which cost approximately $20,000 per patient per year.

In addition, apremilast is also undergoing phase 3 studies for the treatment of ankylosing spondylitis, a type of long-term arthritis that Humira, Remicade, and Enbrel are all currently approved to treat.

These encouraging results show that apremilast still has a strong chance to become a new pillar of revenue growth for Celgene. The FDA is expected to reach a decision on the approval of apremilast by next March.

However, to stabilize that growth, investors should also keep an eye on the possible approval of apremilast, along with sales of its new multiple myeloma treatment Pomalyst, which analysts believe could hit annual peak sales of $1 billion. The success of both drugs could eventually balance out Celgene's top line growth and make it a safer long-term investment.