While Dominion Resources' top line exceeded expectations by 6.8%, its earnings beat out predictions by an even greater 11.1%. Adjusted EPS came in at $1.00, 8 cents greater than estimates and a nickel higher than its previous guidance range of $0.85-$0.90.

Chairman, President, and CEO Thomas Farrell noted that this quarter's excellent earnings originated from lower operation and maintenance expenses, as well as the sale of its TL-388 transmission assets.

But Dominion Resources shares have been on the rise recently because of more than this quarter's earnings. 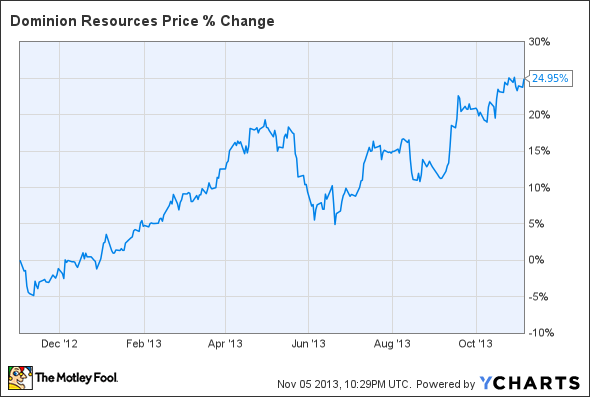 The company was approved in September to export LNG to non-Free Trade Agreement countries from its $3.6 billion Cove Point plant in Maryland -- a major regulatory win that opens up growth opportunity. In the earnings report, the company reported that the project remains on track for 2017 operations.

Other major power projects remain on schedule, and Dominion Resources recently announced its intention to form a master limited partnership for its regulated gas subsidiaries by 2015.