Humble Bundle's business model is simple -- pay what you want for the games you want. The idea was the brainchild of Jeff Rosen of Wolfire Games, an indie game developer. Rosen was inspired by sales of bundled packages on Valve's Steam platform and a "pay what you want" sale of World of Goo, which generated $117,000 in revenue in 2009.

From indie to mainstream

Since the debut of the first Humble Indie Bundle in May 2010, nine Humble Indie Bundles, which consisted of three to 10 indie games, have been released. Since the Humble Bundle business model proved popular, the idea was expanded to include Android games, music albums, and eBooks in 2012.

However, the biggest news came in November 2012, when THQ -- faced with bankruptcy and delisting at the time -- sold nine of its top-selling games, including Metro 2033, Red Faction: Armageddon, and Warhammer 40,000 in a Humble Bundle.

THQ's bundle generated an average price of $5.76 per purchase and did little to save the failing company, but it raised media and gamer awareness of the existence of Humble Bundles. Starting in March 2013, the release of Humble Bundles accelerated considerably with Humble Weekly sales.

While most of these bundled sales consisted of games from lower-profile indie developers, things shifted into high gear when Electronic Arts (NASDAQ:EA) stepped up in August and offered 10 of its top selling games -- Dead Space, Dead Space 3, Burnout Paradise, Crysis 2, Mirror's Edge, Medal of Honor, Battlefield 3, The Sims 3, Red Alert 3, and Populous -- in a Humble Bundle. The first six games were made available to anyone who paid over a penny, but the last four could only be unlocked by a purchase exceeding the average price of $4.93. At the end of the two-week sale, EA sold 2.1 million units and generated $10.5 million in sales.

Similar to EA's bundle, the first four WB games will be available to download for anyone who pays over a penny, but the last two will only be unlocked for customers who pay above the average purchase price, which is $4.64 at the time of this writing.

Proceeds can all go to charity

At a minimum purchase price at less than $5, both bundles are huge bargains -- the EA bundle was worth approximately $180, based on current prices on Amazon, while the WB bundle is worth around $125.

Even better, sales generated by the bundles can be completely donated toward charity. EA allowed shoppers to donate their purchase toward various charities, including Watsi, the Human Rights Campaign, the San Francisco AIDS Foundation, the American Cancer Society, and the American Red Cross.

Digital distribution makes it all possible

The amazing thing about these charitable Humble Bundles is that they would have been inconceivable a decade ago, when games were still mainly sold in boxes at brick-and-mortar retailers.

In 2004, Valve changed all of that with the introduction of Steam -- a digital distribution service that introduced the concept of owning the usage rights to a game as opposed to the physical ownership of one. It was a business model that became more popular as Internet speeds increased and hard drives got bigger.

Today, all the major game publishers -- EA, Activision Blizzard (NASDAQ: ATVI), Ubisoft, and Take-Two -- use their own digital distribution platforms. It's become an essential part of the gaming industry's business model, since it allows companies to boost margins considerably by reducing the amount of paper packaging, manuals, and optical discs required for physical versions. It also makes it possible to deliver DLC (downloadable content) as additional paid add-ons to the core game. 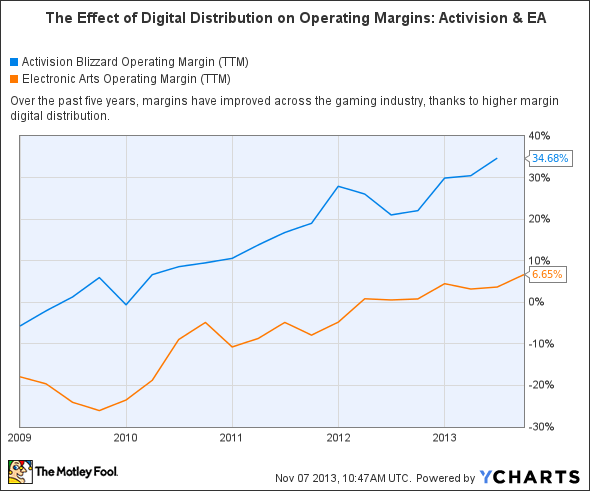 Thanks to digital distribution, all EA and Time Warner have to do is sell additional licenses to the game, which are unlocked and downloaded on Steam, to raise money for charity. No physical products of any kind need to be manufactured or shipped.

Keep an eye out for more upcoming bundles

With the involvement of major players like EA and WB Games, it's likely that the Humble Bundle business model could gain traction in the gaming industry.

While the Humble Bundle model has been mainly used for independent games -- which are generally cheaper than major titles from large publishers -- it could become a viable option for large publishers to clear out older titles at steep discounts.

I believe that it's possible that EA will eventually release a Bioware bundle, consisting of its Mass Effect trilogy and Dragon Age games -- which could allow gamers new to the series to catch up on the plot before new games in the franchises arrive. Activision could do the same with Call of Duty, which has already reached its 10th main installment with Ghosts, and Ubisoft might even release an Assassin's Creed bundle.

Could an EA Bioware Humble Bundle be on the way as well? Source: Softpedia.com

Despite losing potential sales of full-priced games by offering them in steeply discounted bundles, major publishers could take advantage of these bundles to introduce new gamers to their core franchises -- on which they rely heavily to generate consistent annual revenue.

For now, gamers interested in the WB bundle should act fast -- the deal only lasts until Nov. 19!