With the stock market up 22.5% on the year, many investors have begun to question whether there are still any attractive companies to buy. There is one regional bank with three things going for it that may make it worth putting on your watch list.

There are certainly reasons to sell BB&T if it's in your portfolio, but it also has a number of things going for it that may make it worthy of investment.

1. It's gaining market share in its primary markets
BB&T operates in 12 states and Washington, D.C., but 80% of its total deposits are found in North Carolina, Virginia, Florida, Georgia, and South Carolina.

While it principally faces competition from Bank of America, Wells Fargo, and SunTrust (NYSE:STI) in those states, it has been steadily gaining market share over the last three years, as shown in the chart below: 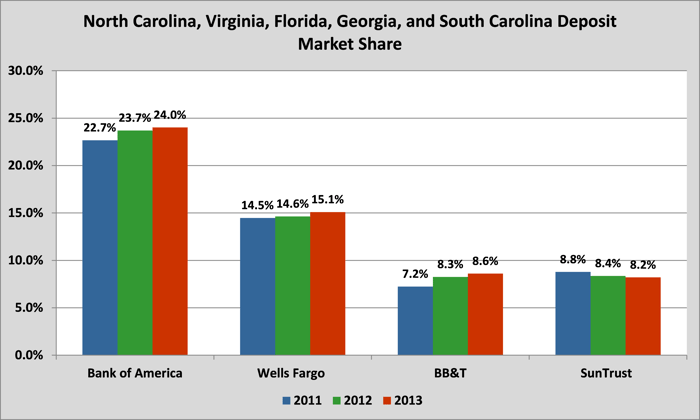 While Bank of America and Wells Fargo are also gaining market shares, their respective gains of 1.3% and 0.6% cannot match the 1.4% boost seen at BB&T. SunTrust, meanwhile, is actually losing market share against its similarly sized rival.

Shown a little differently, BB&T has had a resounding increase in total deposits as well:

Any time a bank is able to make such significant inroads in its primary markets, even when up against significant competition; that is undoubtedly a good thing.

2. Despite shrinking margins, tangible book value is on the rise
BB&T has had a rough 2013, with its year-to-date return on assets and return on equity well below where each stood at this time last year. Through the first nine months its return on average assets has shrunk from 1.1% to 0.8%, and its return on average equity has fallen from 10.3% to 7.1%. While this is certainly alarming, the bank has actually had its tangible book value rise steadily over the past year:

Banks are principally valued on their tangible book value, so even in the midst of declining margins it's encouraging to see BB&T is able to steadily increase its value. While the margins are certainly something to be monitored, the growing tangible book value shows that management has the best interest of shareholders in mind.

3. It is more than a traditional bank
While BB&T is a bank in the truest sense of the word, it also operates an expansive insurance business that has made $1.1 billion through the first nine months of 2013, and that has grown its income by 15% compared to the same period last year. In fact, its insurance income is 2.5 times greater than BB&T's mortgage banking income this year. Couple this with its investment banking division ($282 million in net income year to date), and its trust and investment advisory business ($148 million in net income year to date), and BB&T is providing a number of businesses that are generating solid returns.

BB&T is certainly expensive with a price to tangible book value of nearly 2.0 (by comparison Bank of America sits at 1.1), but it has a number of things going in its favor that may indicate 2013 hasn't been as bad as it first appears.