If you buy bank stocks, you could do a whole lot worse than New York Community Bancorp (NYSE:NYCB).

The New York City-based regional bank is, hands down, one of the best in the business. Led by a group of long-term executives who, unlike the vast majority of corporate executives, take their fiduciary duties seriously, it's outpaced the broader market by leaps and bounds since going public in 1994. 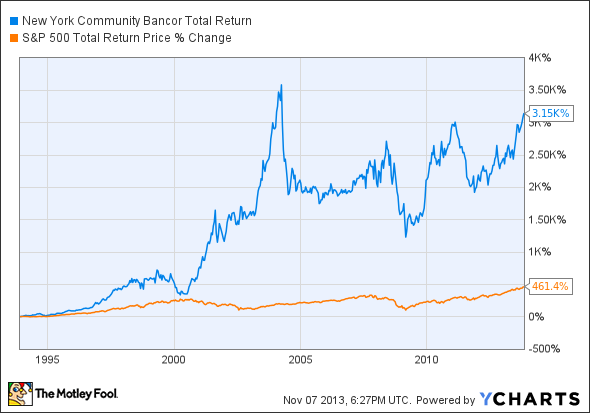 While the first thing that may come to mind when you see this chart is the axiom that "past performance is no guarantee of future success," I'm here to tell you that there are at least three reasons to believe that New York Community Bancorp may be an exception to this rule.

1. Exceptional credit management
Above all else, great banks are exceptional risk managers. That is to say, they don't originate bad loans. But while every bank executive and his mother talk this talk, few actually walk the walk. And even among those that do, there are few that do so as well as New York Community Bancorp. Even at the height of the financial crisis, when most banks were charging off 3% to 4% of their loan portfolios, New York Community Bancorp's holdings were solid as a rock, barely budging from pre-recession levels. This is a remarkable accomplishment and is, alone, enough to justify an investment in the bank.

2. Shareholder-friendly capital allocation
One benefit to successfully managing credit risk is that virtually all of a bank's pre-provision operating income makes its way to the bottom line. At many banks, however, this is where it goes to die thanks to egregious and highly self-interested capital allocation plans (i.e., stock buybacks) enacted by company executives.

This is a point that I and others have discussed ad nauseam in the past, but it's nevertheless something that continues to be one of the biggest reasons that companies underperform their potential. To mention only the most glaring examples, in the handful of years leading up to the financial crisis, Bank of America (NYSE:BAC) and Citigroup (NYSE:C) blew a combined $80 billion on share buybacks -- that is, almost exactly what they subsequently took in government assistance to stave off bankruptcy. The net result was massive and inexcusable shareholder dilution.

The good news when it comes to New York Community Bancshares is that its executives don't play these games. By distributing the lion's share of its earnings to shareholders via dividends, it gives them the power to decide what to do with their share of the profits.

3. Insider ownership
Last but not least, if you're wondering why New York Community Bancorp is so shareholder friendly, the answer may have something to do with this: its chief executive officer Joseph Ficalora -- who, mind you, has been with the bank since 1965 -- has accumulated an $85 million stake in the company. That's equivalent to 17 times his annual salary; the point being, he has a deeply vested interest in making sure that it doesn't do anything stupid.