This just in: Apple (NASDAQ:AAPL) doesn't marry any of its component suppliers for life. Don't expect unconditional faithfulness out of Cupertino.

That's the big takeaway from recently published Chipworks teardown of the iPad Air. Most of the nitty-gritty component choices were familiar from earlier iPads, iPhones, and iPods, and the iPad Air is indeed an evolutionary, refined take on the iPad 4.

But the final teardown analysis still pushed Cirrus Logic's shares off a steep cliff, and the stock closed more than 13% lower on Monday. Why? Because Cirrus' long-standing status as Apple's favorite audio amplifier provider turned out to have changed. The iPad Air's audio amplifiers -- tiny chips that simply boost the power of audio signals while trying to preserve the signal's clarity -- come from Maxim Integrated Products (NASDAQ:MXIM) instead.

Maxim is a much larger company than Cirrus, and its customer Rolodex is far more diverse. Winning or losing one minor supply contract for one Apple product isn't going to change Maxim's future very much, and investors seem to agree; the stock only gained roughly 1% on the news. 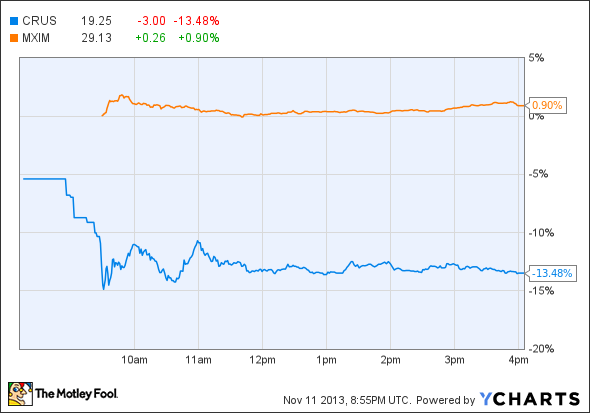 But Apple is Cirrus Logic's far and away largest customer. And if Apple could drop in Maxim's amplifier chips, what's to stop Cupertino from looking elsewhere for the core audio chip next time? So, Cirrus investors are understandably nervous.

On that note, the iPad Air teardown should be a wake-up call to Qualcomm and Broadcomm as well. Audio chips make up a very small and fairly concentrated market, mostly because the chips involved are inexpensive in the grand scheme of a total product design. When IHS iSuppli tore apart the same tablet, the audio chips didn't even rate a mention in the estimated component cost discussion -- the Cirrus part of the equation is just too darn small to really matter.

But the touchscreen components add up to $43 per iPad sold, and the wireless systems total $32 according to IHS. These are big-ticket items compared to the pennies spent on audio components. Apple sold about 70 million iPads over the last four quarters; multiply the cost of Qualcomm's or Broadcom's pricey components by that many units, and you'll get some significant revenue drivers.

Moreover, wireless radios and touchscreen controllers come from a plethora of manufacturers, all with the scale to support an Apple-sized product launch or two. In other words, Broadcom and Qualcomm can't afford to rest on their laurels. Apple could jump elsewhere at any time.

So is this the end of the road for Cirrus Logic, then? Not hardly, but the company is facing some tough choices here.

Cirrus might want to put its back into alternative revenue streams. Cirrus chips are rarely found in Android devices of any sort. Breaking into that much larger market could be a game changer -- but then Cirrus would have to refocus on low cost over the features and quality that Apple demands.

Or maybe the replacement revenue will come from power controllers, tucked into mundane items like LED light bulbs and garage door openers. The LED lights in particular could provide a big enough market to make Cirrus investors forget about Apple. The tricky part for Cirrus is to beat out a veritable army of hopeful rivals for the same huge-volume contracts.