MLPs are hot properties. Investors love them because of the high distributions. Oil and gas companies love them because investors are willing to pay up to buy an MLP, which unlocks value for the assets. That's why the market was caught quite off guard earlier this week when Denbury Resources (NYSE:DNR) declined the opportunity to join the MLP parade.

Background on the decision
The management team of Denbury Resources has been faced with a looming deadline. By 2017 or so the company would be producing much more cash flow than it needs to support its growth. Management knew it wanted to return much of that excess cash to investors. What it didn't know was how best to transition to a growth and income company.

While it could simply just start paying a dividend, it also had the option to convert some or all of its assets into an MLP. As it explored its available options, it decided that keeping it simple was the best option. Investors didn't like that move initially, but it really does make sense for the company. Let's take a closer look at why simplicity makes sense for Denbury.

Most of Denbury's assets would have fit in an MLP in one form or another. Because of this, and as the slide below shows, Denbury considered four MLP options. 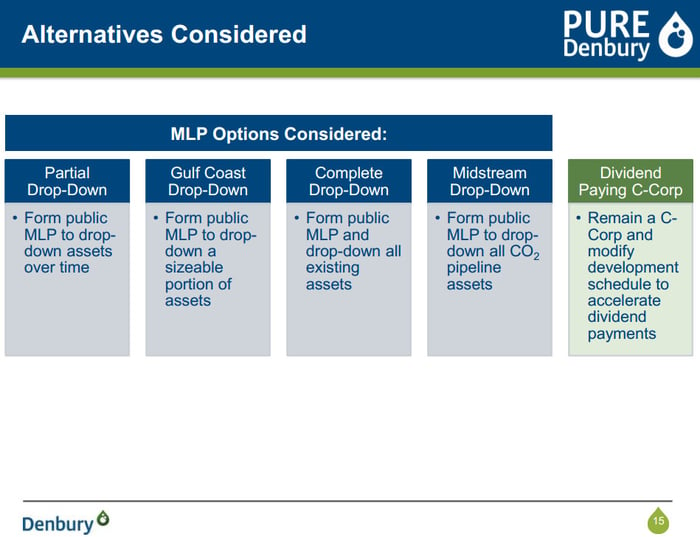 The upstream option
Its big dilemma was if it should become an upstream MLP like LINN Energy (OTC:LINEQ) or BreitBurn Energy Partners (OTC:BBEPQ). All three companies own the long-life, low-decline producing assets that fit well in an MLP structure. In fact, both LINN and Breitburn also own enhanced oil recovery projects that use carbon dioxide, and Breitburn even owns some carbon dioxide related infrastructure thanks to its big oil deal earlier this year.

The big difference between these three companies is that Denbury's focus is on growing organically, while LINN Energy and BreitBurn grow production primarily by acquiring new assets. As the slide below shows, unless Denbury wanted to use its MLP units as acquisition currency, it didn't make sense for the company to join the upstream MLP sector. 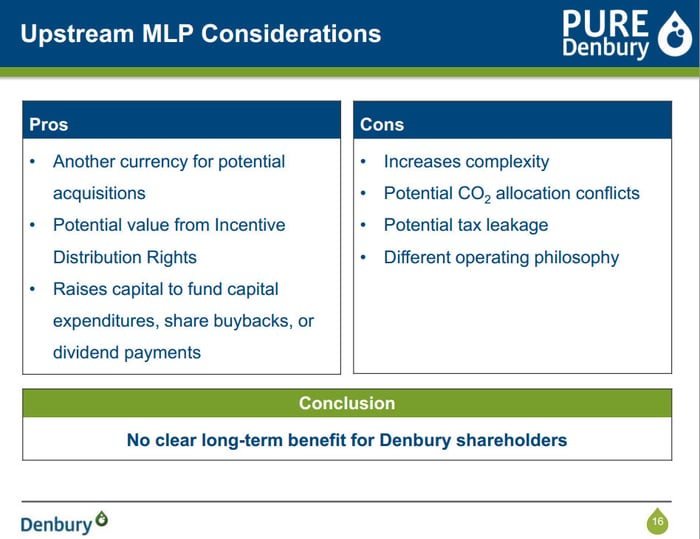 Denbury has enough growth from its current assets that it can grow production by 4%-8% annually for the next several years using just its internally generated cash flow. If it became an MLP, a bulk of that cash flow would need to go to its investors. That means its growth would need to be funded by either debt or equity. While there is nothing inherently wrong with that, the fact that it does have these large capital needs adds to its risk as the company could have been forced to tap the capital markets at unfavorable rates. At this point, that risk didn't yield out sized rewards.

Its other options would have it becoming more like Kinder Morgan Partners (NYSE: KMP). Its carbon assets not only support Kinder Morgan's carbon flooding in the Permian Basin, but it sells additional carbon supplies to others in the Basin. The different here is that Kinder Morgan's business is built around the fees it earns as a major midstream operator, not from producing oil. Denbury simply sees greater opportunities in oil production than in shipping carbon.

Investor takeaway
While investors sold off Denbury on the news, they are missing the big picture. By moving to an MLP Denbury would be giving up a great deal of control of its future. Its ability to grow within its cash flow, while still paying a dividend, means it won't be at the mercy of the capital markets. Further, by hanging on to its carbon infrastructure it will retain control of this distinct competitive advantage. So, while its dividends might not be as high as they could have been if Denbury made the switch to an MLP, its new dividend will be among the most rock-solid in the industry and will have ample upside in the future.