Investors love stocks that consistently beat the Street without getting ahead of their fundamentals and risking a meltdown. The best stocks offer sustainable market-beating gains, with robust and improving financial metrics that support strong price growth. Does TASER International, (NASDAQ:AAXN) fit the bill? Let's look at what its recent results tell us about its potential for future gains.

What we're looking for
The graphs you're about to see tell TASER's story, and we'll be grading the quality of that story in several ways:

What the numbers tell you
Now, let's look at TASER's key statistics: 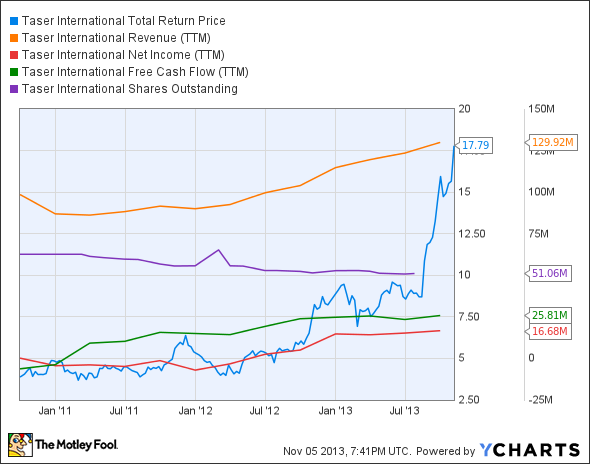 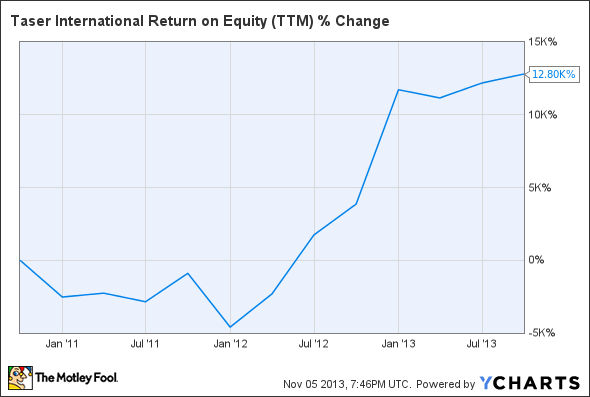 How we got here and where we're going
Last year, TASER International earned only two out of seven possible passing grades, but it has absolutely roared back with a strong performance in its second assessment. The company's gained four more passing grades, for a new total of six, and the lone failure only happened because net income has outpaced free cash flow during our tracked period -- however, nominal free cash flow is actually higher than net income for TASER at present. The rewards for shareholders who anticipated this rebound have been enormous over the past two years, but hardly undeserved. Will TASER keep up its growth, or will the personal-defense company find investors saying "don't tase me, bro!" next year?

TASER's shares were shocked last month, suffering a rare big drop after the company announced price cuts on Evidence.com, and Axon Flex cameras because of uncertain police budgets. The Axon Flex's price was cut nearly in half to $499, from $949, and Evidence.com subscriptions were reduced to a starting price of $9.99 per month. However, that weakness was short-lived -- investors seem confident that TASER will enjoy strong demand for its products, and recent reports back up that assessment.

Several U.S. law enforcement agencies had already placed new orders for these two products before the price cuts: The Topeka, Kan., police ordered 45 Axon Flex units, and the Greensboro, N.C., police placed a large order for 160 Axon Flex units, 10 Axon body cameras, and a three-year subscription to Evidence.com. TASER CEO Rick Smith boasts that the Axon camera will be standard issue among police forces within the next five to 10 years. Longtime Fool contributor Rick Munarriz notes that the company is beefing up its video-based offerings, which may enhance police transparency at a time when many in the public have become increasingly distrustful of police forces. TASER recently acquired Familiar, a developer of video- and photo-sharing apps for smartphones and tablets.

The parade of violent tragedies in America has yet to produce tougher gun-control laws, but that doesn't mean cops in the crosshairs aren't looking for less-lethal alternatives. TASER's X2 and X26P smart weapons have thus been in high demand and have been picking up a number of orders this year. Most notably, the Houston City Council sanctioned a deal to purchase $9.5 million of TASER's smart weapons over the next five years. TASER also bagged multiple orders for the X26P and X26P HD video cameras, valued at more than $1.8 million.

This poses a threat to gunmakers Sturm, Ruger (NYSE:RGR) and Smith & Wesson (NASDAQ:SWBI), which have historically enjoyed good support from the nation's police forces -- and this isn't the only threat to gunmakers, either. Sports-retail leader Dick's Sporting Goods pulled modern sporting rifles from all of its stores nationwide, and some politicians have begun to push back against the National Rifle Association's promotion of virtually unregulated gun ownership. TASER's non-lethal weapons have clearly enjoyed a resurgence in popularity as a result of this ongoing controversy, and its development of new accountability technologies for police forces could wind up impacting the gun industry in other ways. If the American public is exposed to enough evidence of gross police firearms misconduct, the blowback could crimp sales and public relations for years.

Putting the pieces together
Today, TASER has many of the qualities that make up a great stock, but no stock is truly perfect. Digging deeper can help you uncover the answers you need to make a great buy -- or to stay away from a stock that's going nowhere.