A transcontinental railroad with a huge reach across Canada and the United States owns a competitive edge over other railroads and truckers. And because that railroad is also the most efficient in the industry, it can make tremendous profits in a growing economy. Meet Canadian National Railway (NYSE:CNI), the only railroad with connections to the Pacific Ocean, the Atlantic Ocean, and the Gulf of Mexico.

History of the Trans-Con
The first transcontinental railroad was created in 1869 to connect San Francisco Bay with the existing Eastern U.S. rail network at Council Bluffs, IA. Union Pacific (NYSE:UNP) owns the route between Council Bluffs and San Francisco. UP's track covers the western two-thirds of the United States, but goes no farther east than Chicago.

Canadian Pacific Railway (NYSE:CP) completed Canada's first transcontinental railroad in 1885, connecting Vancouver with the Port of Montreal, but currently does not reach the Atlantic Ocean.

Canadian National Railway, founded in 1919, was privatized in 1995, and then expanded into the United States with the purchase of the Illinois Central Railroad and the Wisconsin Central.

Why the TransCon is critical
Railroads like CN, BNSF Railway, Union Pacific and Norfolk Southern are vital to North America's economy. They are capturing record levels of intermodal traffic, which includes containers from ships, hauled by rail to various terminals, where they are transferred by crane to truck for their final destinations.

Intermodal traffic is climbing due to a steady recovery in the North American economy. Lumber, autos, chemicals and grain shipments also are up. U.S. intermodal traffic in October totaled 1,317,601 containers and trailers, up 6.8 percent (84,120 units) compared with October 2012. The weekly average of 263,520 intermodal units in October 2013 was the highest weekly average for any month in history, according to the Association of American Railroads.

There's been some concern lately that the recovery may be running out of steam.  Rail traffic data for October doesn't seem to support that. A number of economically sensitive commodities, like lumber, autos, and chemicals, saw higher traffic volumes in October.  The sharp increase in grain carloadings is a welcome change and points to the cooperative relationship railroads have established with their partners in the agricultural community. 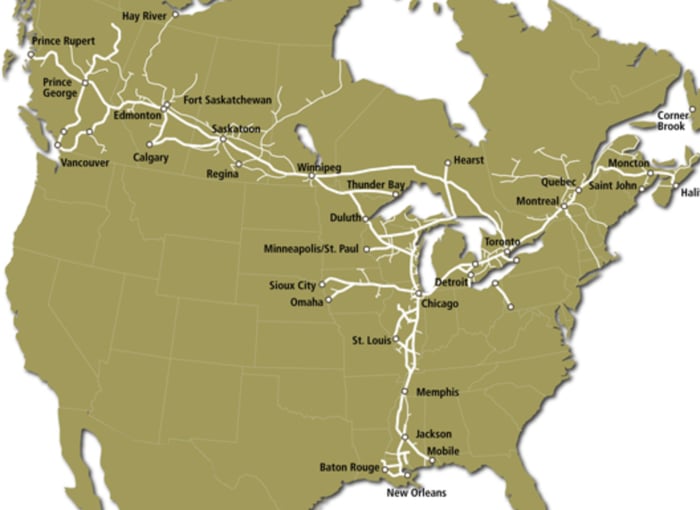 CN's far reach
CN serves close to 75% of the U.S. population and 100% of Canadian markets.

CN owns important links through Chicago, the key hub in North American rails. It recently broke ground on a new logistics park in Joliet, IL. Shipments moving via rail to and from the facility will benefit from CN's Matteson Connection, offering quick and easy interchanges through Chicago's busy network. CN is hoping companies with major distribution needs will locate warehouses at the logistics park.

Canadian National can ship oil, metals, and coal west to Prince Rupert or Vancouver, B.C., or haul oil south to refineries in the Gulf of Mexico at New Orleans. The company can ship intermodal goods from Nova Scotia to Chicago.

CN owns the only rail to the massive Athabasca Oil Sands in Alberta, the largest known reservoir of crude bitumen in the world. It also has major lines heading from Edmonton down to the ports of Vancouver and Prince Rupert, B.C. In all, CN owns 20,600 route miles of track, compared to Canadian Pacific's 14,700 miles.

Measuring performance
Analysts like to watch a railroad's operating ratio to see how efficiently it is being run by management. Operating ratio is calculated by dividing operating expenses by revenues. Here are operating ratios in 2011, 2012 and through third quarter 2013.

The chart shows railroads have improved their operating ratios, with Canadian National Railway leading the pack. E. Hunter Harrison improved operating ratios during his tenure as CN president and CEO from 2003 to 2009. He was recruited out of retirement to run Canadian Pacific in 2012 as president and CEO. Harrison has since improved performance at CP by reducing its workforce and selling assets.

As the geographically dominant railroad in North America, with the lowest operating ratio in the industry, CN's valuation appears fair compared to its peers. The railroad is taking advantage of growing economies in both Canada and the United States. I plan to own my CN stock for many years to come.