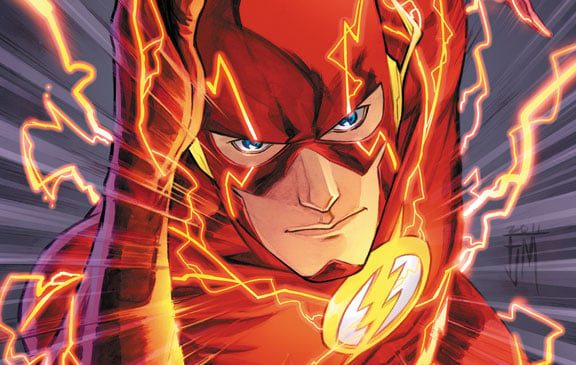 While Marvel and Walt Disney (NYSE:DIS) struggle with hardcore fans' desire to see more superheroics in Marvel's Agents of S.H.I.E.L.D., DC Entertainment and Time Warner (NYSE:TWX) have upgraded their plans for the Flash.

According to Deadline.com, DC Entertainment and the CW now plan a stand-alone pilot for a show starring Glee actor Grant Gustin in the title role. He was to be introduced in episodes 8 and 9 of Arrow as Central City police investigator Barry Allen and then reemerge as the Flash in episode 20, a backdoor pilot to a potential spinoff series.

Gustin's first two appearances in Arrow as Allen remain on the books. But his first appearance as the Flash will come in the pilot, a decision CW executives made after seeing cuts of him in action in Arrow. Both appearances were "very well received", Deadline reports. For his part, Arrow star Stephen Amell took to his Facebook News Feed to celebrate the news

The CW's decision to fund a stand-alone Flash pilot comes at an interesting time for both Disney and Warner. Agents of S.H.I.E.L.D. has taken lumps for not being more like Marvel's The Avengers, which partly inspired and informed the show. Viewership has fallen with each successive episode even as the show remains a hit with men aged 18-49.
Arrow, meanwhile, is nailing the bull's-eye by introducing new characters with strong ties to the DC Comics universe, including Black Canary, Brother Blood, China White, and the Bronze Tiger. The latest episode, "Keep Your Enemies Closer," featured the assassin Deadshot and ranks as season two's most-watched. Arrow creators Greg Berlanti, Marc Guggenheim, and Andrew Kreisberg seem bent on giving us as much comic book goodness as we can handle.
A Flash pilot could also hasten development of the DC Cinematic Universe and get us closer to seeing key characters such as Wonder Woman on the big screen. And of course, the more characters there are, the more likely it is we'll see a team-up film (i.e., The Justice League) following 2015's sequel to Man of Steel, which DC has taken to calling Batman vs. Superman. DC fans and Time Warner investors can only hope.
Do you agree? Or would you rather have seen the Flash emerge as a more direct spinoff of Arrow? Leave a comment below to let us know where you stand.

DC Does What Marvel Won't With "Agents of S.H.I.E.L.D" @themotleyfool #stocks $TWX $DIS Next Article
Current