Last week, Google (NASDAQ:GOOGL) launched its Google Play Music app on iOS, bringing yet another mobile music streaming service to Apple's (NASDAQ:AAPL) mobile devices. Google Play Music on iOS is late to the party, hardly a competitor to the likes of Pandora (NYSE:P), and doesn't have the music chops Apple enjoys. 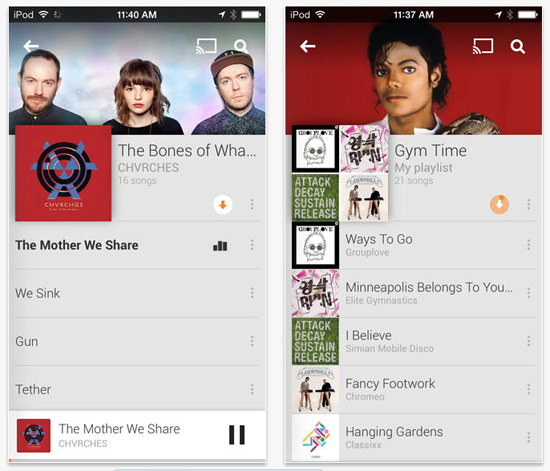 A day late and a download short
It's obvious that Google is late to iOS' music streaming space, considering that Apple itself showed up late when it launched iTunes Radio back in September. At least Apple has been firmly embedded in the music space for years and the company knows how to make great native apps on its mobile platform. These two things have helped iTunes Radio to at least make a dent in mobile music streaming. 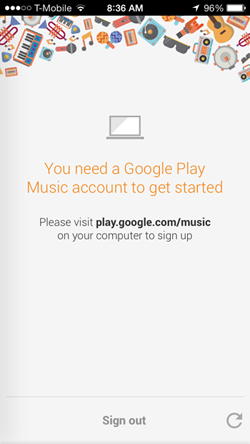 A month after its launch, Apple said 20 million people had tried iTunes Radio and more than 1 billion songs had been streamed. But despite those high numbers, reports show that iOS users still prefer Pandora over Apple's service. Investment Bank Canaccord Genuity put out a report last month showing that 92% of iTunes Radio listeners still use Pandora, mainly because iTunes Radio has "poorer automated song collection." While iTunes Radio may have brought down Pandora's active listeners a bit in October, Pandora's monthly listening hours and overall U.S. radio market share grew from 7.77% to 8.06% since iTunes Radio launched.

Aside from Apple's skill at launching services its own devices and Pandora still being a go-to service for iOS users, Google also shot itself in the foot in two big ways: There's no mobile sign up in the app and no in-app song purchases.

The Verge reported last week that Google didn't want to negotiate with Apple for in-app purchases, which means users can't buy songs from inside the app. iTunes Radio obviously has this feature, as do iOS Pandora users.

But another potential hurdle to Google's music service is the fact that iOS users can't sign up for it from their iPhone. After downloading the app, users can sign in through their Google account and are then taken to screen that tells them they need a Google Play Music account and provides a web address that can't be clicked on or copied and pasted from the phone.

This may seem like a simple problem, but consider that Microsoft just added Facebook Login to Windows 8 and Windows Phone 8 because they said that one of users' biggest hurdles in trying a new app is "getting past an identity screen." The login issue is likely another way Google is trying to skirt having any in-app purchase ties with Apple, but it's likely to hurt potential signups.

Foolish final thoughts
Pandora investors are obviously the ones who have the most at stake here, and so far things have been going their way. Even after a highly publicized iTunes Radio launch, Pandora is still growing and -- at least for now -- seems to have a superior service. Google Play Music on iOS seems more like a halfhearted attempt to keep up with what everyone else is doing.

One nice feature that Google Play Music has is that users can add 20,000 of their own songs to the service for free, but aside from that, there isn't much that would lure iOS users away from iTunes Radio or Pandora. While Pandora investors don't have much to be worried about with Google Play Music on iOS, they should keep an eye on any more gains iTunes Radio makes, as well as updates that will make Apple's service better.