Even A.O. Smith's (NYSE:AOS) scorching 82% one-year return hasn't seemed to put the company on many investors' radars. If you're an investor looking for a solid play on the ballooning middle class in China, this water-heating specialist is worth exploring.

First, a recap of its strong third-quarter results:

Let's look at the business behind these numbers, and see whether its longer-term metrics match its promising recent past.

A history of innovation from America's heartland
Milwaukee-based A.O. Smith primarily makes residential and commercial water heaters and boilers. It's the leading water heater manufacturer in the U.S., and has a 25% market share in China. In 2009, the company entered the Chinese residential and light commercial water purification business, which accounts for a very small 2% of its business.

For the first nine months of 2013, A.O. Smith posted $1.6 billion in revenue, and is on track to generate about $2.1 billion to $2.2 billion for the year. Breakdown by region is about 70% North American and 30% rest of the world, with China accounting for the bulk of the latter.

The company's goal is to become a global leader in water technology, so investors should expect future acquisitions in this broad space, and further innovations from a company that seems to have inventiveness built into its corporate genes.

A.O. Smith's roots go back to a machine shop founded in the 1870s, which eventually became the country's largest manufacturer of bicycle parts, and later created the world's first car frame assembly line to supply Henry Ford with steel frames for his Model K.

In 1936, the company patented the glass-lined water heater, which became a standard for the industry. It opened its first European operation in the 1970s, and entered the Chinese market in 1995. Over the years, it has acquired several water heater and boiler manufacturers, and in 2006 it became the world's largest company in hot water supply. Recent innovations include an ultra-quiet gas-fueled tankless water heater, and water treatment products that save more water and have longer-lasting filters.

Ah, a warm shower ... a new luxury for many Chinese
Can you imagine the joy of having hot running water in your home for the first time? That's what many Chinese have been experiencing as huge waves of China's population move into the middle class. You can be sure the brand name of something that brings such pleasure also warms the hearts of many of these people, likely resulting in greater brand loyalty.

A.O. Smith entered China's water heater market in 1995, and invested heavily in advertising, so it enjoys a strong brand name. While many of its customers are first-time buyers, the company is also benefiting from repeat buyers, given the average water heater lasts about 11 years. Leveraging its brand name was the reason behind its entrance into the water purification business.

In its most recent quarter, A.O. Smith's China sales jumped 35%, and accounted for 27% of total revenue, while overall sales were up 16%. The company's North America and rest-of-the-world segments -- heavily China, though that category also includes some European and Indian sales -- now have about the same operating margins: 15.4% and 15.3%, respectively. So future China growth shouldn't come at the expense of profit, as is often the case with companies doing business in developing countries.

Both market-share gains and an expanding overall market are driving the company's growth in China. A.O. Smith's market share is about 25%, up from the low 20s. In the third quarter, the company opened its second water heater plant in China, which will boost its capacity by 50% once it's running at full speed.

Temperature on metrics is cranked up
The following chart shows the 10-year revenue, EPS, and normalized (or adjusted) EPS growth. In 2011-2012, the company realized a gain related to the sale of its electric motor business. The normalized chart takes that big blip out, so we get a true picture of the company's earnings from its business operations.

For a somewhat cyclical business, revenue did decline during the recession, and it's still a bit off peak levels. Earnings took off in 2011, largely due to the company successfully introducing higher-end water heaters and higher-efficiency boilers; the boilers are produced by its Lochinar business, which it acquired in 2011. 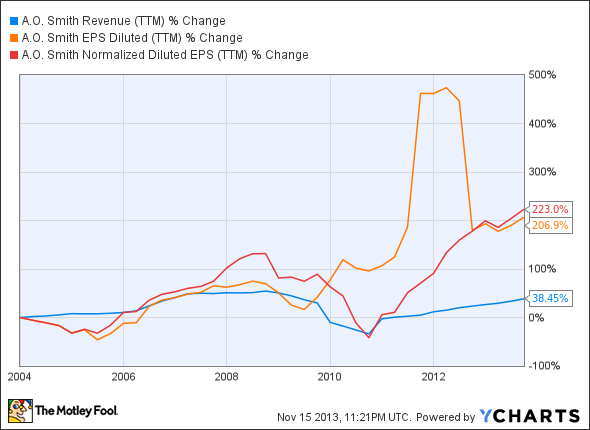 Earnings have been growing considerably faster than revenue, so the net profit margin has been increasing. It hovered between 3% and 4% until 2010, when it began its steady rise to its current 7.9% level, on a trailing-12-month basis.

The stock's sizzling one-year return of 82% and five-year return of 493% shouldn't be a surprise, given the company's earnings' growth. Despite the stock's run-up, it's reasonably valued with a forward P/E of 23.6 and a 5-year PEG of 1.2.

Other key metrics look solid. Debt to equity is a low 0.18. Free cash flow for the trailing-12-month period is roughly the same as reported net income, notable given the company has heavily used cash to fund its growth.

'Boring' can be bankable
While a water heater manufacturer might bring yawns when compared to sexier tech stocks, A.O. Smith's strong future prospects might leave your portfolio smiling. The massive waves of Chinese entering the middle class should fuel further growth for this innovative company.