Great Plains Energy (NYSE:GXP) is the parent company of Kansas City Power and Light and Greater Missouri Operations. As the name suggests, Great Plains Energy regulates electricity provision in Kansas and Missouri. Its coal-based power plant Iatan 2 is recognized as the most energy efficient power plant in the U.S. by GP Strategies. The company's achievements don't just stop there; it also successfully added itself to the energy-transmission market under the name of Transcource.

Based on the latest data made available by the U.S. Energy Information Administration, there was an increase of 10% in the average retail price of electricity to ultimate customers in the summer of 2013.

Despite this, Great Plains Energy's income statement does not show an upturn in revenue, primarily due to lower-than-normal summer temperatures, which brought about a lesser usage of air conditioners. Come winter, and the forecast looks to be in favor of Great Plains Energy.

Winter temperatures are expected to be colder than normal, with the coldest periods expected from mid-December to early March. A colder winter means higher electricity consumption, which would not only boost revenue but bridge the gap between Great Plains Energy production capacity and demand.

Fundamentals
Great Plains Energy's net income has shown volatility in the last five years despite the fact that the company had marginal changes in its revenue due to development expenses of new projects. The company's operating margin currently stands at 23.3%, higher than it has been in the last 10 years.

In the long run, demand for electricity is dependent on the expansion of the commercial and industrial sectors, and Missouri and Kansas have been no exception to the investment slowdown that continues to plague the U.S. economy. Despite this limitation, three-year averages of revenue and net income growth are above the industry average.

Great Plains Energy's numbers look grim when compared to a $50 billion utility company like Duke Energy (NYSE:DUK). Compared to the industry average P/E of 23.8, Great Plains Energy is the most undervalued option in comparison to utility heavyweights. Its PEG ratio shows an earnings growth rate that is faster than the majority of the industry and is only eclipsed by its joint partner in Transource -- American Electric Power (NYSE:AEP).

Besides growth, Great Plains Energy promises a consistent dividend payout despite not having the best yield in the utility sector. The company's payout ratio has been hovering close to 60% for the past three years, in line with its remarks about wanting to keep the ratio between 55% and 70%.

Great Plains Energy's liquidity is in much better shape today than it was earlier in the year or in 2012. An improvement in financial health is mirrored by positive free cash flow in the last two quarters of 2013. For the fourth quarter of 2013 and Q1 2014, I expect its cash flow to show positive signs and hit a purple patch as cash flow from operations rises. The company's visibly decreasing debt/equity is a sign of growing confidence in the revenue generation capability of Kansas City Power and Light and Greater Missouri Operations.

Winter prospects
The graph below illustrates the performance of Great Plains Energy, Duke Energy, and American Electric Power in comparison with the Dow Jones Utility Index. As mentioned earlier, lower than anticipated temperatures in the summer called for a lesser use of air conditioners. In the graph below, this is represented by the sharp dip in share prices for all utility companies in the month of July. A year on from 2012 and Great Plains Energy's share price has appreciated 22%, higher than the utility average index and peers. 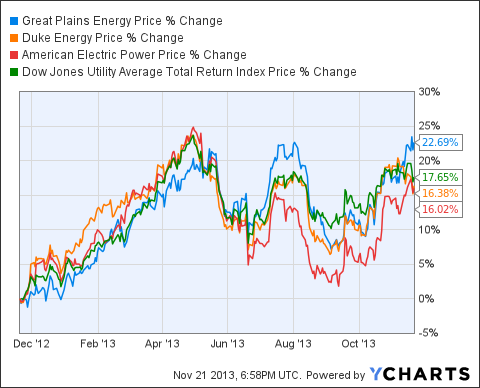 I expect Great Plains Energy's bull run to continue all throughout the winter since electricity consumption is cyclical. Great Plains Energy has also paired up with American Electric Power for Transource's Iatan-Nashua and Sibley-Nebraska city projects, which are expected to be completed in 2015 and 2017, respectively. Benefits include increased system reliability and decreased production costs, which will positively affect the company's margins.

The ongoing economic growth of the region will also increase demand for electricity. The increased function of Ford's Kansas City assembly plant , BNSF Railway's new inter-modal facility, and a sharp increase in housing permits for 2013 are stacking the cards in favour of Great Plains Energy. Some 83% of its electricity generation is done via coal; 63% of the coal power plants are already equipped with emission-reducing scrubbers. Furthermore, the addition of the La Cygne power plant in Kansas will take this number up to 72%.

Expectation
Great Plains Energy's improved liquidity over the last two quarters and introduction of transmission lines is fast changing the company's fortunes. Bundled with favorable weather, the stock has tremendous amounts of untapped potential. The stock is currently undervalued and has brilliant prospects for future growth. I believe Great Plains Energy is a diamond in the rough, and that it will shine by the end of winter.