Citigroup (NYSE:C) is a household name and gets lumped into a class of megabanks that we all seemingly know well But there's one surprising thing that may miss the eye of the casual observer when it comes to this giant bank.

Like Bank of America (NYSE:BAC), JPMorgan Chase (NYSE:JPM), and Wells Fargo (NYSE:WFC), Citigroup has an expansive business model that offers a host of banking services to pretty much anyone and everyone. But did you know that Citigroup not only has an immense presence here in the United States, but it also has an incredible presence internationally?

The breadth of its international scale and scope is unique when compared with the other biggest banks. Consider the distribution of its assets by region: 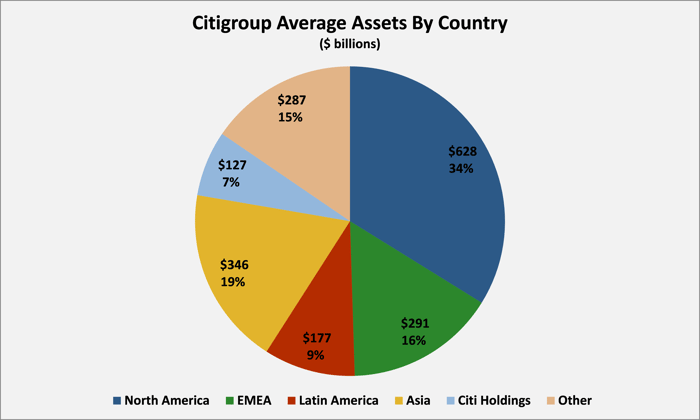 While certainly the other banks I mentioned have an international presence, none are as diversified as Citigroup. Consider that Bank of America and Wells Fargo disclose only their top 20 non-U.S. exposure by countries in their 10-Q filings. JPMorgan Chase does outline the revenue in loans by region for its Corporate and Investment Bank and its Asset Management businesses, but in its earnings releases, few are as open about their international presence as Citi.

Consider its revenue composition by country over the past year, where approximately $18.5 billion, or 48%, of its total consumer banking revenue came from outside North America. It certainly has a big presence in Mexico, but it is heavily diversified elsewhere across the globe: 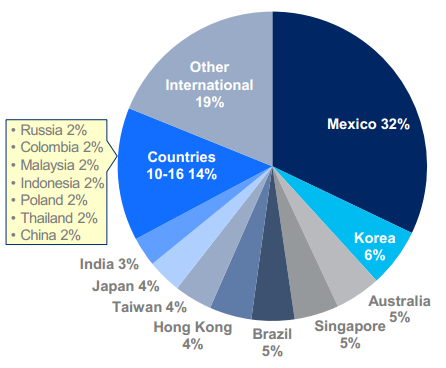 As of last count, Citi had more than 62 million customers in 36 countries, with deposits totaling $330 million. In fact, one of the more interesting things about the global consumer bank is that although it has represented only approximately 25% of Citigroup's assets, over the past 12 months it has generated nearly 50% of the company's net income. Clearly, Citi has a uniquely expansive international presence and exposure -- but the curious thing is how well it has performed of late.

Recent performance
Year to date, excluding the impact of foreign exchange rates, Citi has seen both the revenue and income of its global consumer business take a turn for the worse:

It's troubling to watch net income move in the wrong direction, but Citi largely attributed it to lower mortgage banking activity in the United States, financial reform in Mexico, and worsening consumer credit, and regulatory changes in South Korea.

Seemingly the butterfly effect, which essentially postulates that a small immaterial change in one area can create a monumental impact elsewhere, is in full force when it comes to Citi's consumer bank, as its success is predicated largely by financial stability around the globe.

Looking ahead
In late 2011, Citigroup formed its Global Consumer Bank, which brought the consumer banking operations of all 36 countries under one team, and it has been executing this initiative ever since. Although this would seemingly be the logical way to run the business, it provided Citi a new focus to attempt to serve customers with similar needs across different markets in the same manner and deepen relationships with the most profitable clients.

A key driver behind this initiative was that emerging and international markets are likely to be poised to grow at rates much quicker than other more developed markets in the future. And in fact, despite the recent difficulties I've mentioned, Citi has seemingly executed well on these initiatives, as earnings over the previous year are up by 75% compared with the third quarter of 2011.

Certainly it is far too early to gauge whether Citi will be successful in these efforts -- but anyone considering an investment in the company should certainly keep in mind that the success of Citi is largely predicated by the success of its operations in both the U.S. and abroad.