The success of fracking in the U.S. now has other nations considering this method of oil and gas extraction.

Russia and the U.K. are some of the latest nations to reassess the viability of their shale deposits in the hopes of creating a regional economic advantage. If successful, the benefits of fracking will provide a greater degree of energy independence and fiscal growth. This is part of a great energy game that includes deepsea drilling to access remote pockets of oil.

In addition, Royal Dutch Shell (NYSE:RDS.A) has teamed up with Sinopec to assess the potential of China's Sichuan Province. This area represents roughly 40% of China's known shale gas deposits.

The map below illustrates which nations have a strategic advantage in shale deposits. 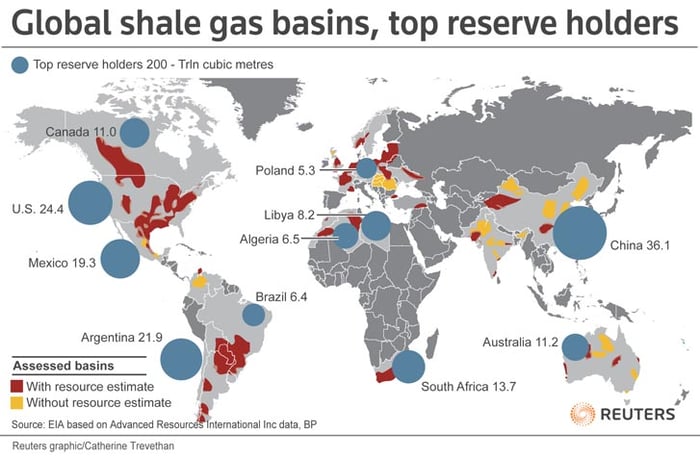 Companies to watch
Large oil companies are extremely versatile. It is the nature of the business, and historically it has been proven that the company that is able to adapt to new technology and diversify seamlessly often is the most profitable.

Areas of activity
Recently, the western Xinjiang region has seen a great deal of activity in infrastructure investment and development. Growing concerns over increased political instability could pose an increasing risk to potential developments in the region.

Reminiscent of the ancient silk trade route, China has started several ambitious infrastructure projects to ensure supply chains and regular delivery of product to market. Beijing is planning on creating a network of transportation infrastructure that will link up with other major international infrastructure hubs in neighboring countries.

Russia is planning on developing Siberian shale deposits. Incentives through tax breaks are planned to encourage further exploration and development. Reuters noted that tax breaks could be as high as $21 per barrel. One reason for such a bold move is that current Russian production is at near capacity – and demand is not declining. A recent deal between Russia and China to provide 10 million barrels per year for the next ten years will put a strain on production.

"This regime will not be a catalyst for big growth in the oil sector in 2014-2015 but it may change the sector's configuration over a five-year timeframe," said Alexei Kokin, an energy industry analyst at Uralsib, a Moscow brokerage.

Argentina has vast tracks of semi-porous shale deposits. The Vaca Muerta formation was discovered in 2010 by Repsol S.A. (OTC:REPY.Y), an oil and gas company based in Spain. This deposit has both shale oil and gas with an estimated 126 million tons of oil. A barrier to rapid development has been Argentina's price controls on natural gas. It is likely that once the benefits and profit are realized, the Argentine government will take similar steps as Russia to further develop their resources.

Fracking in the UK has had mixed results. An 18-month ban was put in place after fracking was blamed for an earthquake. So far, Centrica and GDF Suez have cornered the market in the UK.

How long can it last?
There is a growing fear that the staying power of shale reserves is not that of more traditional oil and gas sources. Bloomberg notes that "Shale wells start strong and fade fast, and producers are drilling at a breakneck pace to hold output steady."

The U.S. Energy Information Administration estimates that 29% of U.S. production of oil comes from shale deposits.

The investor's concern
The shale gas boom promises to be lucrative, and in the true nature of the E&P industry it will be a rapid cycle of development. Two question are posed for investors. How long will it take to develop the infrastructure necessary to make shale gas and oil operations profitable for China, Russia, and Argentina? The second question is how long will these wells yield a profit?