The Environmental Protection Agency shocked the renewable-fuel industries earlier this month when it released its proposals for 2014 renewable fuel volumes. It was the first time the agency proposed to reduce renewable fuel mandates originally set in the 2007 Renewable Fuel Standard, which has sent ethanol producers such as POET and Green Plains Renewable Energy (NASDAQ:GPRE) scrambling. Ironically, this is the same agency that refused to offer a blending reprieve to refiners such as CVR Refining (NYSE:CVRR) during the devastating 2012 drought that tanked ethanol production.

The EPA softened its stance on ethanol largely because of concerns about the Blend Wall, or the theoretical limit of 10% ethanol for a given volume of gasoline. The hard numbers easily suggest the agency was right to side with refiners and automakers. In fact, the numbers actually suggest that the United States has reached peak ethanol -- which is especially true if the proposal for 2014 is finalized. Take a look at historical monthly ethanol production. 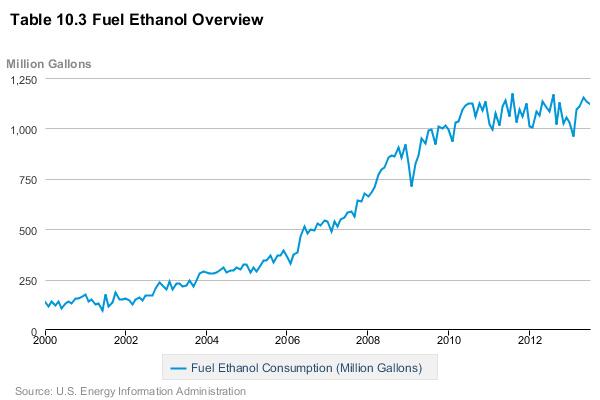 It's important to note that the concept of peak ethanol is tied to blending ratios set by regulatory agencies. Although production struggled in the last two years because of the 2012 drought, the nation's fuel supply simply cannot support more ethanol if E10 is the de facto blend. The only way to accommodate more ethanol is by requiring higher ethanol blends such as E15. However, there appear to be far too many obstacles -- market, logistics, consumer, technological, transportation -- for an E15 policy to be enacted any time soon.

Why we're at or near the peak
There are several compelling reasons to believe that the United States is indeed at or near peak ethanol. The EPA has received loud and clear fears raised by the refining and auto industries over the Blend Wall. The nation's gasoline supply has already bumped up against the 10% limit that the current infrastructure can confidently handle.

Much smaller volumes of the renewable fuel will be required to maintain a national 10% blend in the coming decade as fuel economy improves and gasoline consumption decreases. What should investors make of peak ethanol, and what can be done to prepare for the changing market?

Why this peak is a good thing
Some were hoping that a slide in ethanol credit prices in the second half of the year would soften the economic arguments made by refiners. For instance, CVR Refining had originally forecasted spending $200 million to $250 million on credits in 2013 but revised that range down to $175 million to $190 million on the third quarter conference call. Ethanol credits have a much smaller impact on margins than oil prices, but refiners and investors will enjoy the added stability nonetheless.

The short-term situation isn't as rosy for ethanol producers. The proposed mandates call for nearly 2 billion gallons less of the blendstock than was used this year. However, cutting back on first-generation corn ethanol will create several long-term opportunities for producers and investors. For instance, the new policy will spur investments in cellulosic ethanol technologies that could be retrofitted to a small number of existing corn ethanol biorefineries. That won't be an option for the majority of facilities and won't solve the overall volume problem with ethanol of all generations, but it is far from the only option.

Several technologies now exist that will allow corn ethanol producers to switch output from ethanol to higher value isobutanol. I expect a reduced market for ethanol to create a major catalyst for Gevo, Green Biologics, and Butamax, the joint venture between BP and DuPont. Aside from capturing more valuable blending credits than corn ethanol and being a superior blendstock in general, isobutanol can be processed into a wide range of high-value chemicals.

Additional technologies for adding value to existing ethanol production are also available. Green Plains Renewable Energy owns 53% of BioProcess Algae, which builds photobioreactor farms next to existing industrial facilities, allowing them to turn waste CO2 into valuable biomass for use in animal feed, nutraceuticals, fish feed, and chemicals. The company employs the technology on a 5-acre algae farm at its Shenandoah, Iowa, ethanol facility, which could be expanded to as many as 400 acres if certain performance metrics are met in 2014. The technology could greatly improve the economics of the corn ethanol industry and just about any other manufacturing facility or technology that directly creates CO2.

Foolish bottom line
Like it or not, peak ethanol has arrived for E10 gasoline. We'll need to wait until early next year for the EPA to finish its proposal, but I don't expect corn ethanol volumes to be revised upward by much, if at all. A shrinking need for ethanol is sure to create grumbling from producers and a collective sigh of relief from refiners. However, I'll be looking for companies who use blending reductions as an opportunity to bolster their market share, increase profitability, and create innovative new technologies over the long term.