If I were to tell you that crude oil prices were on the rise, operating costs were up, and refinery capacity was constrained from maintenance work, I think the gut reaction would be that CVR Refining (NYSE:CVRR) would have a really rough quarter. That wasn't the case, though, as the company posted a significant increase in net income and cash available for distribution.

These numbers seem to defy the rules that would normally dictate a refiner's earnings results. So let's take a look at what happened this past quarter that allowed CVR to post such surprising results and whether these results are replicable.

Perhaps the most surprising thing about this quarter's results was the fact that the company was able to produce a better net income result compared to this time last year despite having a decent portion of its Coffeyville, Kansas refinery shut down. Total product produced this past quarter came in at 188,300 barrels per day, which is 17.8% less than throughput this time last year.

The difference-maker for the quarter was mostly refining margins and some one-time gains. CVR's refining margin for the quarter was $15.04 per barrel, which helped to more than offset the impact of less refining capacity for the quarter. It also helped that the company benefited from a revaluation of its inventory (a $20 million gain) as well as a gain on some futures contracts it uses to hedge crude oil prices (a $59 million gain). Absent these gains, the company's EBITDA results were much more in line with last year's results. 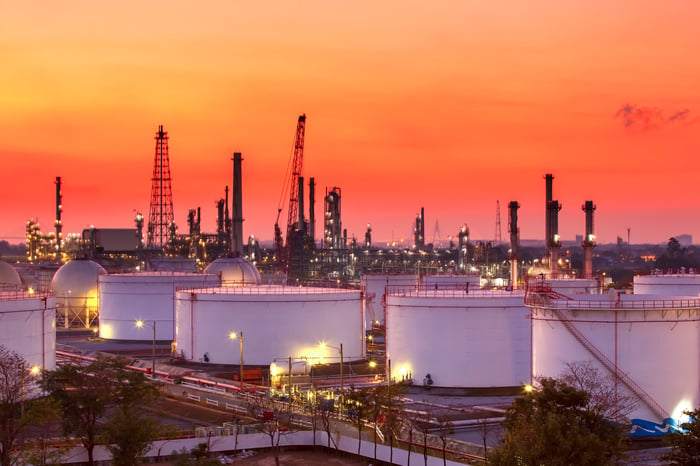 For years, CVR Refining's conference call had at least a 20-minute rant about the Environmental Protection Agency's' renewable fuels standard and how it made operating a small refinery like CVR's challenging. Former CEO Jack Lipinski would repeatedly say that it was prohibitively expensive for the company to do anything about it.

Lipinski retired at the end of 2017, though, and his successor Dave Lamp has changed the company's strategy. Sure, he may still say that renewable credits are a significant cost, but he has a plan to mitigate those costs. Here's Lamp giving a rundown of the initiatives he wants to make as CEO:

As discussed in our last call I outlined our strategic objectives for '18; we continue to develop these joint initiatives and as we move forward I will provide updates. A recap to these objectives are restructuring of our organization to reduce G&A costs and illuminate [ph] on profitable activities and improved decision making. Two, build a wholesale/retail business to reduce our RIN [Renewable Identification Number] exposure. Three, install biodiesel blending facilities at all our racks. Four, expand our capacity to process WCS and light shale oils at our Coffeyville refinery and to capture market opportunities offered by the coming IMO [International Maritime Organization] specifications. Five, improve the liquid yield at our Wynnewood refinery by 3.5% and increase our ability to process light shale oils produced in our backyard. 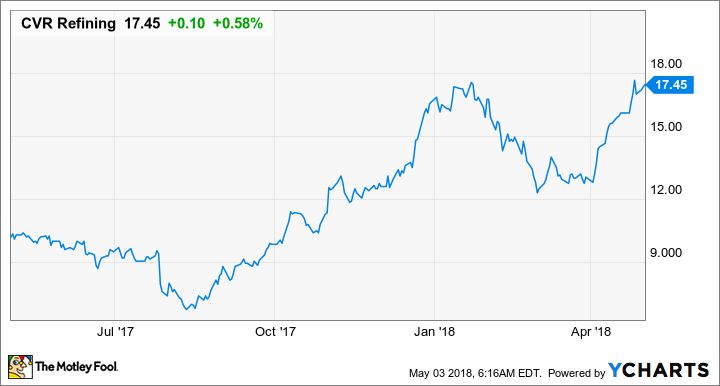 Will the music stop?

It's incredibly refreshing to hear that CVR Refining is looking to both grow its business and mitigate a cost that has been an issue in the past, but prior management chose to complain rather than actually do anything about. While these most recent results probably aren't repeatable because of those one-time gains, CVR does expect to have its Coffeyville refinery up and running at full speed soon, and refining margins in its part of the country are actually still increasing (management said margins so far this quarter are above $17 a barrel).

The refining industry is in a huge amount of flux right now as mergers and acquisitions continue to consolidate the industry. It has left CVR as one of the smallest players in the U.S. refining business. With a solid balance sheet and an advantageous location, it could be an attractive acquisition target.