Even though CVR Refining's (NYSE:CVRR) results haven't been great over the past year or so, it was a bit strange that management was electing to hoard cash rather than pay a distribution to its shareholders. This previous quarter, though, management finally decided it was secure enough financially to pay its investors again.

Here's a look at the company's most recent results and what investors can expect from here. 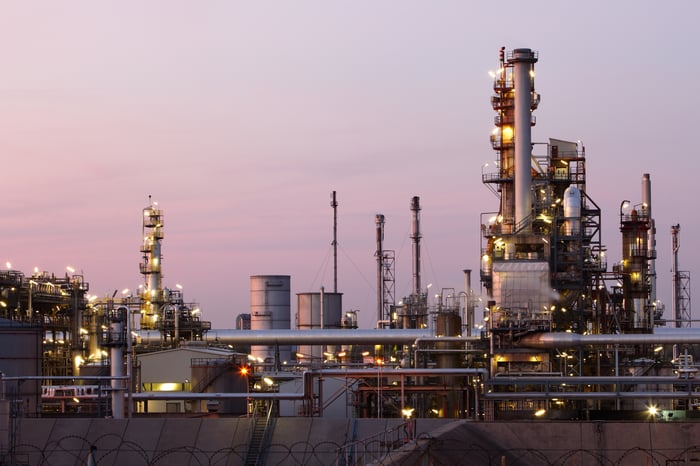 After several quarters in a row of slogging through a challenging refining industry, CVR finally got some reprieve. Higher refined product demand from the summer driving season helped to lower inventories, and a wider spread between domestic and international crude helped to produce a more favorable refining market. For the third quarter, CVR's refining margin per barrel came in at $13.72, which was well above the $7.48 per barrel margin it posted in the prior quarter.

It should be noted, though, that costs rose this past quarter to $6.47 per barrel. A lot of that was related to higher than ordinary expenses related to scheduled major turnaround expenses. In fact, management shut down much of its Wynnewood facility for major turnaround work toward the end of September. That was also why the company's total throughput slipped to 203,000 barrels per day. The lower that number is, the higher per barrel costs.

Cash going out the door

For the seven previous quarters, CVR's management elected not to pay a distribution to its unitholders. Since the company is a variable-rate master limited partnership, management has the discretion every quarter to set its distribution. Management elected not to pay anything out for much of 2016 because, well, not a lot of cash was coming in the door. CVR also said that it was withholding some of that cash to cover significant turnaround expenses.

Over the past year and a half, though, that cash horde built up and was looking quite large. So large, in fact, that one had to start wondering what exactly management had planned. This past quarter, that cash pile was up to $560 million. That was even more than all of the company's outstanding debt.

Instead of indulging in an acquisition or some other use of cash, management elected to pay a distribution of $0.94 per share. At today's stock price, that would make for an annual dividend of 7.2%. What's even more encouraging is that the company will only shell out $139 million of that cash pile for that dividend in the fourth quarter, so there should be plenty of cash for its turnaround activities and other potential distributions in the upcoming quarters.

As he is wont to do, CEO Jack Lipinski gave his typical spiel on how the current renewable fuels standards in the U.S. are making the lives of merchant refiners incredibly challenging. He also gave a heads up that investors can expect next quarter's results to be much worse:

The Coffeyville, Kansas, and Wynnewood, Oklahoma, refineries ran well during the 2017 third quarter, posting a total combined crude throughput of 203,093 barrels per day (bpd) despite operational disruptions at both plants. In addition, the Wynnewood refinery began planned fall maintenance at the end of September and is on schedule to complete its turnaround in early November. As a result of the large scale and cost of the Wynnewood turnaround, CVR Refining's results will be negatively impacted for the year.

It's encouraging to see CVR's management decide to pay a distribution again after so many quarters without one. That is especially true for CVR's parent company CVR Energy (NYSE:CVI), which has been paying dividends with cash on hand for some time to cover for the lack of distributions from its subsidiaries.

While the refining market may ebb and flow over time, two things are rather consistent with CVR Energy: 1) It will run its facilities well and keep per barrel costs low, and 2) management will continue to deride the renewable fuels standard. This past year, the company put itself in a bit of a bind by making some decisions before those rules were changed, and now it will have to pay for that decision.