For the seventh quarter in a row, CVR Refining (NYSE:CVRR) hasn't been able to do what its investors expect it to do as a master limited partnership: pay a distribution. That is due in part to the challenging refining market, but there may be more to the story. The company is holding on to a lot of cash right now, which seems unusual. Let's take a look at CVR's most recent results and contemplate what this cash pile could be used for in the future.

CVR Refining's results continue to be thrown around by the whims of the oil and refined-product markets. After the prior quarter's surprise profit, the company's second-quarter results slid right back into the loss column as refining margins retreated to $7.48 per barrel, after adjusting for inventory-value impacts. That margin is simply too low for CVR to cover its expenses and turn a profit.

On the operations side of the business, there isn't too much to complain about. The company continued to run both its Coffeyville and Wynnewood refineries at high rates. Total throughput did fall slightly below first-quarter results to 222,600 barrels of refined product per day, but the first quarter was a record-setting quarter and this run rate is well above the nameplate capacity for the two facilities. Also, direct operating expenses and major scheduled turnaround expenses declined to $4.44 per barrel.

What's going on with all the additional cash?

CVR Refining is set up as a variable-rate master limited partnership. This means that at the end of each quarter, the company is supposed to distribute all cash produced in the quarter that is available after paying cash expenses such as taxes and interest. Of course, management has some leeway because it can elect to retain some cash for anticipated maintenance capital or something similar, but the idea is that cash ultimately goes to the shareholders. 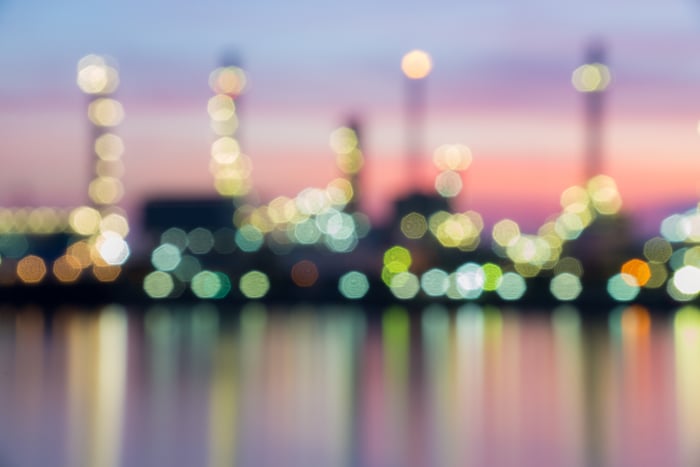 In the fourth quarter of 2015, CVR's management elected to stop paying out cash to shareholders. The reason was that the refining market was hitting a rough patch at the time and the company needed to preserve cash for future spending obligations such as turnaround expenses and maintenance capital spending. The refining market has been tough since then, but the entire time CVR Refining has been generating excess cash that keeps piling up on the balance sheet. At the end of the most recent quarter, it had $515 million in cash and short-term investments. That amount is roughly equivalent to all of the company's capital expenditures since the beginning of 2014.

So why would the company need this much cash on the books? This is pure speculation, but it would be logical to conclude that CVR has some big plans for that cash. It would be enough to pay down all of the company's outstanding debt (not that likely since the company isn't overburdened with debt), or it could be deployed on acquisitions or a major capital project. Management has hinted that it wants to enhance its crude sourcing abilities to lower feedstock costs. So it wouldn't be that surprising if CVR were to invest in some new crude transportation and logistics assets.

Alternatively, CVR could use the cash to vertically integrate the business by getting into the retail and marketing business. Branching out could make sense as management has been pounding the table for years that costs to comply with the Environmental Protection Agency's renewable-fuels standard are killing the company's bottom line. Companies that engage in both refining and retail have a greater ability to pass some of those compliance costs to the ultimate consumer. It just so happens that Sunoco LP has a rather large retail network of stores in the North Texas and Oklahoma region -- very close to CVR's refining operations -- up for sale.

If management is eyeing these options, it sure hasn't let on. With that much cash on the books, though, one has to wonder if something big is on the horizon.

CVR has had a rough go of it lately even though its refineries have been running well. Much of the company's troubles are out of management's hands. Throughout these tough times, though, management has been accumulating any cash flow from operations rather than pay it out as one might expect. It's hard to see why management thinks it needs that much cash for normal operations, so it will be worth keeping tabs on this company in the coming months as it might be about to make a move.