Refining has been a tough business as of late, but independent refiner CVR Refining (NYSE:CVRR) surprised a lot of people this past quarter by posting a net profit. A little help from the overall market for refined petroleum products and well-executed operations for the quarter led to CVR swinging into the black. 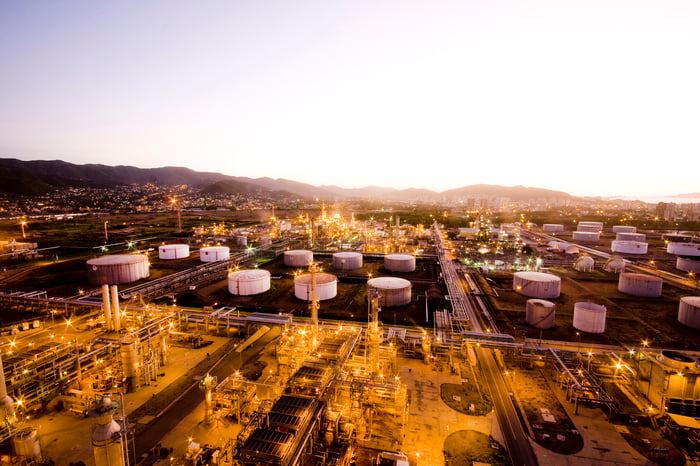 Attributing the move to a net income gain solely to the swing in refining margins doesn't give the company credit for the things it did this past quarter. Total refining throughput was 214,369 barrels per day. According to management, that is a quarterly record for CVR Refining. On top of the high run rate, per barrel operational costs were kept to a quite low rate of $4.63 per barrel. Because of the nature of refining and the need to do scheduled maintenance and turnaround work, investors shouldn't consider this a rate the company can sustain long term, That said, it's encouraging to see management squeeze costs out of the system like that.

One of the benefits from this little earnings boost was a decent injection of cash. At the end of the quarter, CVR Refining had $408 million in cash compared to a total debt load of $546 million. What is discouraging about that increase in cash, though, was that management still doesn't think it prudent to make some of that cash available for distribution. On top of the typical cash reserves for environmental, maintenance, and scheduled turnaround work, management also held $54 million this quarter for what it calls future operating needs. This has been a common theme lately, and it seems that this need to reserve lots of capital for future needs suggests the company is planning something big in the future.

As has been the case for who knows how many quarters in a row, CEO Jack Lipinski continued his personal crusade against the U.S. EPA's renewable fuels standard and how it's currently structured with his press release statement:

The wild volatility in the market for Renewable Identification Numbers (RINs) during the first quarter once again proves that RINs are not fundamentally priced but are in fact manipulated. The cost to produce a D-6 ethanol RIN is currently between six cents and 10 cents, yet it trades 40 cents higher. This is the price manipulation in the market that must stop and CVR Refining supports the efforts of the many refiners and independent gas station dealers to reform this misguided regulation.

As I have said many times before, RINs are an egregious tax on independent, merchant refiners and small fuel retailers. CVR Refining alone has incurred more than $670 million in RIN expenses since the beginning of the program. Not only has the Company incurred this expense, but our unitholders have experienced significant market cap losses. RINs are sucking the lifeblood out of the merchant refining industry. We hope and strongly believe that this pernicious RINs program will be changed in the near future. However, in the interest of prudent corporate fiscal management, CVR Refining will not distribute cash this quarter.

CVR Refining's management can continue to make these soapbox statements about RINs. Until the regulations actually get changed, though, investors should consider the situation at hand to assess this company. In that regard, you have a relatively low-cost operator that has shown to generate a modest profit in even a tough refining environment. At the same time, though, those low-cost operations have not translated to generating free cash flow for investors.

By the looks of all that cash on the balance sheet, it would appear that CVR Refining is up to something. Either it plans to make some significant investment in its own refining, or perhaps it really is just a cash cushion to get through an inevitable time when its facilities need to go down for maintenance work. Either way, it will be worth watching to see what the company does with that strong balance sheet in the coming quarters.