Kellogg's dependence on cereals might not be healthy for your portfolio.

The food industry is going through an innovative phase where new and healthy products are taking the place of older ones. This is especially true for affluent consumers who have been shifting to healthier breakfast options such as smoothies and Greek yogurt. This change in preference has affected cereal retailers such as General Mills (GIS -0.64%) and Kellogg (K -0.15%).

The problem
Revenue at Kellogg was slightly affected due to lower sales volume and unfavourable currency movements. However, an increase in product prices helped in offsetting the decline in revenue. The company's earnings came out ahead of expectations, standing at $326 million, an increase of 2.5% over previous year. Kellogg's Morning Foods segment fell 2.2%, mainly due to decreasing demand for cereals.

Compared to others
When compared to its peers such as General Mills and Mondelez International (MDLZ -1.02%), Kellogg's performance has not been up to the mark. The stock price performance of each player in the last five years is shown in the chart below: 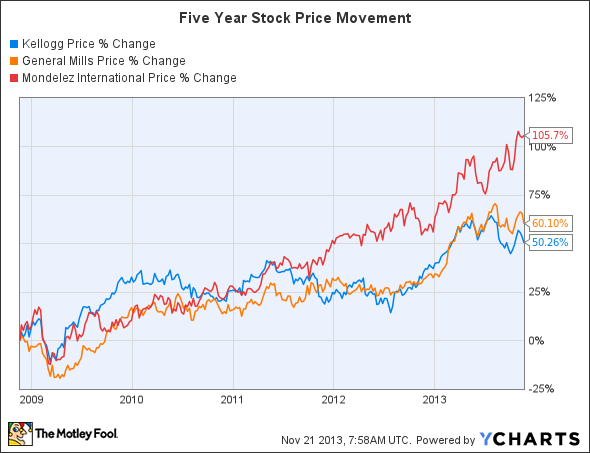 Kellogg has provided the lowest return to investors at 50.3%, while General Mills and Mondelez have provided returns of 60.1% and 105.7%, respectively. This is mainly because of Kellogg's dependence on cereals, which makes 30% of its revenue .

Its peers are less dependent on cereal, with a focus on creating new products to bring in customers. General Mills' introduction of Greek yogurts for health-conscious customers more than benefited the company, as it attracted a lot of customers. General Mills also resorted to higher marketing and promotional spending for its products, which helped in boosting sales.

Mondelez has been successful mainly because of its increased exposure to international markets, especially emerging markets. Mondelez is also undergoing a difficult phase along with weak sales, however. In its most recent quarter, the snacks food company witnessed softening revenue owing to lower coffee prices and weak biscuit performance in China. As a result, it lowered its revenue guidance for 2013 .

Strategies to change things
Kellogg has been trying to provide variety for its customers and improve its revenue. Its 11 varieties of Special K cereals give consumers options to choose from, including flavors such as chocolate and strawberry. It also has a new version of Special K that has extra protein . The cereal maker also plans to add more options made with healthier ingredients so that it can compete with breakfast sandwiches and yogurt .

Kellogg also introduced a breakfast drink that will contain all of the nutrients of a bowl of cereal. This will give consumers a new and an easy way to have cereal. It will be interesting to see how well this alternative does.

The snacks segment was another point of focus for Kellogg. It bought Pringles chips last year to expand its snacks segment overseas. This allowed it to not only expand its product portfolio, but also its geographical footprint. Sales from the U.S. snacks business slipped by 2.5%, though, mainly because of weakness in the U.S. market.

Restructuring on the way
Kellogg announced a restructuring plan in order to control costs. The plan will mainly focus on getting rid of excess capacity and the consolidation of facilities. The company also plans to cut down its workforce by 7%. The cost-saving plan will lead to better margins, which will allow the company to spend more on acquisitions and promotions.

Takeaway
Although new products and a restructuring plan make the company look interesting, it is difficult to say how things will take shape. Reducing costs will not attract more customers. Attracting more customers and generating demand for its products is what Kellogg needs for a brighter future. For now, staying on the side lines and waiting for the right time to invest is a prudent thing to do.