Specialty drugs offer drugmakers and biotech companies pricing power, which has investors increasingly interested in companies like United Therapeutics (NASDAQ:UTHR). But with interest in developing drugs for orphan disease on the climb, can United Therapeutics offset risk from new competitors?

A specialty niche worth hundreds of millions
United Therapeutics only has three commercialized products, and all three are used to treat pulmonary arterial hypertension, or PAH. That disease is characterized by declining cardiovascular function on the right side of the heart, which eventually causes heart failure. As a result, United's drugs seek to relax arteries to allow them to work easier. It's a small, yet growing market with 30,000 patients being treated in the United States, growing 10% annually. So far, United is the biggest player in that market. The company's three commercialized drugs for PAH treat more patients than any competitor, according to a presentation made to Jefferies investors this past summer.

The company's top-selling drug is Remodulin, an injectable drug approved by the FDA in 2002. Remodulin generated sales of $458 million in 2012, up 6.5% from 2011. United hopes sales will head higher following approval in China, with partner Lee Pharmaceutical, this year, and expected approval in Japan next year.

United is also enjoying faster growth from its more recently launched PAH treatments. Sales of inhalable Tyvaso grew 35.5% in 2012 to $326 million, and sales of oral Adcirca grew 73% to $123 million in 2012. The company thinks both can continue to grow as doctors increasingly use them as early and mid-stage treatments.

An increasingly competitive indication
United's ability to make big money treating PAH has attracted attention from larger competitors including Gilead Sciences (NASDAQ:GILD). Gilead won FDA approval for its PAH drug Letairis in 2007. That drug posted 40% sales growth for Gilead in 2012 and grew another 30% in the first nine months of this year to $381 million.

The lucrative market has also attracted mega cap company Bayer (OTC:BAYR.Y). Bayer won FDA approval for its PAH drug Adempas in October, and  in Bayer's Q3 earnings conference call, the company indicated it was boosting its U.S. sales team to market the drug. Investors can expect that those sales reps will be focusing on Adempas' success in trials as both a monotherapy and when combined with currently available treatments.

Swiss drugmaker Actelion has also entered the market with Opsumit, which won approval for PAH in November. That drug is the first approved oral treatment proven to delay disease progression, according to Acetelion CEO Jean-Paul Clozel. Opsumit is the successor to Actelion's previous PAH drug Tracleer, which won approval in 2001 and is set to lose patent protection. Protecting market share for Tracleer was vital for Actelion given  that the drug racked up sales of $1.24 billion in the first nine months of this year.

United's sales and profit tailwinds
Despite the competitive threat, Wall Street analysts are still forecasting sales will climb to $1.24 billion next year from $1.12 billion this year. However, that 10.8% growth marks a deceleration from its 20% plus historical rate. 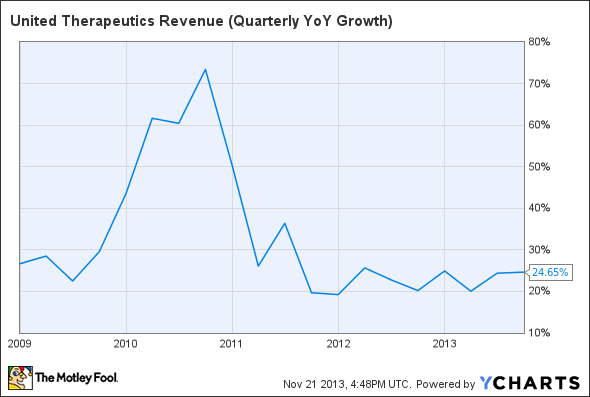 Although top line growth is set to decelerate, United is expected to significantly grow earnings next year thanks to an aggressive share buyback program. Over the last 18 months, United has bought back 20% of its shares as part of an ongoing $420 million buyback authorization. That has analysts expecting that earnings will climb from $5.49 this year to $6.96 per share, up 27%.

The Foolish final take
United has hoped to insulate itself from competitors by launching an oral version of Remodulin, however, that formulation has stumbled. The FDA denied approval for a second time in March. That has shifted attention to an ongoing phase 3 study of a new implantable device to deliver Remodulin. Data from phase 3 tests are expected by year end, and if results are positive, the company thinks the device could broaden the drug's appeal. Beyond that, investors will need to keep a close eye on both Tyvaso and Adcirca sales next year to see if marketing teams at Bayer and Actelion successful convert prescriptions away from the company.