The retail industry has been going through a rough patch, primarily as a result of a choppy jobs scenario, the muted growth rate of the economy, and shaky consumer confidence. Furthermore, a weak back-to-school shopping season and expectations of a weak holiday quarter are some more concerning points.

However, Deckers Outdoor (NYSE:DECK), Skechers USA (NYSE:SKX), and Wolverine Worldwide (NYSE:WWW) seem immune to retail industry developments. These companies seem to be putting their best foot forward and look set to carry their momentum in the future. 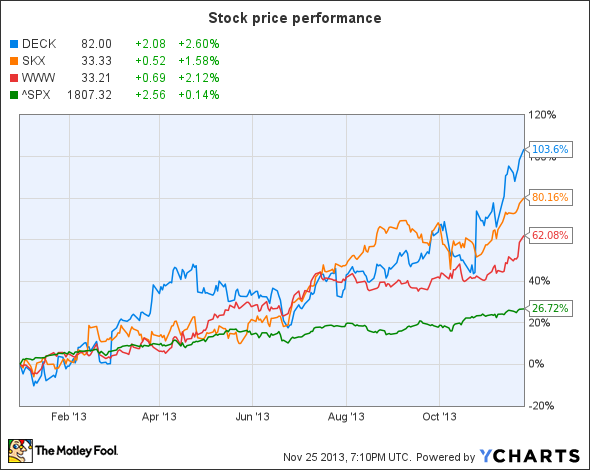 Deckers on a roll
Deckers bears argued that the core brand of the company -- Ugg -- which contributes more than 80% of the company's revenue, is merely a fad and that sales would fall. However, the third-quarter report that Deckers posted proved the bears wrong as Ugg is transforming from a regional domestic women's wholesale brand into a global multi-channel luxurious comfort brand. The company looks all set to deliver another year of record sales with projections to surpass the $1.5 billion mark.

Sales of Deckers during the third quarter increased across all of its brands, with Ugg growing 1.3% to $337 million . Consolidated sales increased 2.7% versus the same quarter in the previous year to $387 million. Earnings per share came in at $0.95 per share and were better than consensus estimates as a result of the expansion of the direct-to-consumer, or DTC, channel.

Deckers has been moving from wholesale to a multi-channel model, and the shift is evident as the wholesale business declined by 1.5%. This year, the DTC channel is expected to contribute around 33% of overall sales, up from 22% three years ago . This is expected to grow further going forward as Deckers executes its plan to expand its store footprint and invest in online presence and direct marketing initiatives.

Deckers' square footage has grown by 56% year-over-year, and going forward the company will concentrate on expanding in smaller and less capital intensive locations in order to maximize performance. As a result, DTC channel sales jumped by 34.5%, with same-store sales increasing by 1.9% over the same period last year.

Skechers and Wolverine are also doing very well
Skechers has come a long way from its 2011 "toning shoes" fiasco and it is carving out a success story of its own. Hong Kong, Malaysia, and Singapore have shown robust sales improvements for Skechers. Going forward, the focus is on India, and the company expects sales from the country to substantially impact overall financial performance in the future .

Skechers reported 30.3% growth from its online sales channel. Fueled by robust performance in domestic as well as international markets, the company reported consolidated revenue of $515.8 million in the third quarter. The uptick in sales was due to new store openings, as well as positive comps of 16.9% due to strong demand for its new products.

Wolverine's strategy of growth through acquisitions is paying rich dividends, as evident from its third-quarter report and the upward revision in guidance for fiscal 2013 earnings. More impressively, Wolverine's earnings are expected to grow at a compound annual growth rate of 20.40% for the next five years, which makes the stock a good pick at a forward P/E of 19.