If you were to listen to the executives at KeyCorp (NYSE:KEY), you'd be excused for concluding that the Ohio-based bank has had a fantastic year.

"Our results reflect another quarter of improved performance as we had positive trends in core revenue and expenses, and our credit quality improved to levels we haven't seen since 2007," said chief executive officer Beth Mooney on the bank's most recent earnings call.

And, for what it's worth, KeyCorp's share price has responded in kind, outperforming both the KBW Bank Index (DJINDICES:^BKX) and the S&P 500 (SNPINDEX:^GSPC) since the beginning of the year. 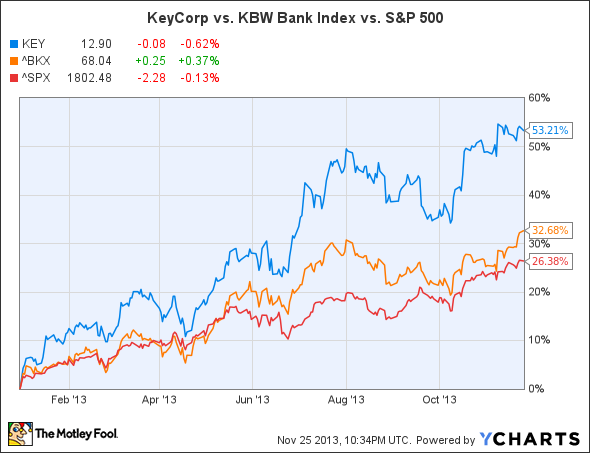 But here's the thing: Mooney's comments only remotely resemble reality. Take one look at KeyCorp's income statement and you'll see what I mean.

The kernel of truth lies in the fact that KeyCorp's pre-tax earnings from continuing operations for the nine months ended Sept. 30, 2013 did indeed grow by $12 million, or 1.5%, compared to the same period last year. In an environment like the present one, in which bank earnings are under attack from seemingly all angles, this is obviously a positive sign.

Unfortunately for KeyCorp, however, there's more to this story than meets the eye. Namely, all of the growth came from a $61 million reduction in loan loss provisions. Excluding that, KeyCorp's earnings before taxes would have actually decreased from the year-ago period.

Now, don't get me wrong, this isn't to say that smaller provisions aren't a good thing, as they are indicative of a healthier credit environment. Holding all else equal, this allows more money to flow from the top line of a bank to its bottom line.

But that's a far cry from claiming that revenue and expenses are behind the "improved performance" that Mooney alluded to. In fact, nothing could be further from the truth, as revenue declined on a year-over-year basis, and expenses actually increased.

With this in mind, it's simply hard to square Mooney's comments with reality. Sure, she has a duty to paint as rosy of a picture as possible, but that doesn't mean current and prospective shareholders have to buy it.

So, what's behind KeyCorp's market-beating performance this year? As I touched on here, the answer is simple: Its shares fell so far during the financial crisis, it still has most ground to make up.