The Wal-Mart of the wealthy?
Costco offers not just bulk dog food but also very high-end luxury items. Here are five surprising things the high-end shopper can find at Costco.

1. Fine art
Costco has a curated collection of fine art, from Marc Chagall and Joan Miro to Disney exclusives and works by emerging artists like Heather Robinson and Johnny Botts. Prices range from $100-$100,000, although currently the highest- priced piece available is an Opie Otterstad commission of the San Francisco Giant World Series celebration for $34,999.99.

Greg Moors, the San Francisco art dealer working with Costco, promises all artwork  comes with a guarantee of authenticity. You can also commission a portrait of your dog when you're buying his chow. 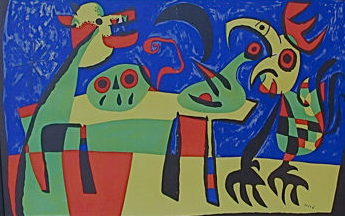 Dog Barking at the Moon by Joan Miro at Costco
Source: Costco

2. Expensive rides
Costco has a partnership with General Motors and more than 3,000 auto dealers throughout the US to sell cars at a discount to Costco members. According to Costco's website, one doesn't have to settle for a Cadillac; Lexus, Mercedes Benz, and other luxury rides are also available to buy at a discount. For more about the process, click here.

3. Fine tipples
Actually, it's not just fine wine that's available at Costco under their Kirkland Signature label but also 40-year-old single malt scotch, premium vodka, and spiced rum.The company's head wine buyer, Annette Alvarez-Peters, is one of the most influential names in wine. She travels anywhere she can make a good deal on thousands of bottles of  wine worthy of the Costco Kirkland label.

Occasionally, rare and expensive wines show up at Costco, like the 2000 Petrus magnum for more than $11,000  once available at a Texas warehouse location.

4. Luxury diamond and gold jewelry
Jewelry certified by the Gemological Institute of America runs between $5,000-$98,999.99, but prices have reached $1 million. Maybe buying a Costco ring isn't as romantic as a Tiffany bauble, but Costco diamond jewelry is also conflict-free and certified.

Although you will likely get a bargain at Costco and it will be a fine diamond, Tiffany's reputation for customer service and the buying experience may be worth the extra money. Apparently, plenty of couples agree as Tiffany reported a stellar quarter on Nov. 26.

5. Luxury travel
You can cruise with Cunard or Celebrity, journey to Paris, or spend a week at the Fiji Matangi private island at surprisingly affordable rates for the one-percenters among you.Costco executive black card members can get even more attractive deals on European river cruises, Trafalgar guided vacations, or the Tahiti over-water bungalow package.

Caveat: if you are buying some of these items at Costco.com or the warehouse, individual items aren't always available and individual web pages can be hard to navigate.

How does Costco sell these at a discount to tony art galleries, premier wine dealers, and luxury jewelers? With millions of members and low overhead, that's how. Costco only charges a 14%-15% markup just like any other item in the wholesaler's inventory, including toilet paper. The average gallery markup on fine art is 60%-300%. The average markup on fine jewelry is more than 100% and on wine it's between 30%-300% depending on whether it's from a specialty wine store or restaurant.

Is Costco a buy?
Earlier in November, Costco reported sales of $8.1 billion for October, a 6% increase year-over-year. The company operates 642 warehouses globally, the majority of which are in North America, but the company has locations in the UK and Australia and a growing Asia-Pacific presence. It is planning to open 18 warehouses outside of the US in 2014.

Costco has more than 71 million members with new memberships growing by 9% in the fourth quarter year-over-year. Retention membership rates are 86% overall. These numbers are up even after a 3% membership-fee increase.

More importantly, high-end executive members rejoined at greater than a 90% rate. New executive signups grew by double digits. Chief financial officer Richard Galanti said the company added 15,000 new executive members per week in the fourth quarter. Sales from executive members account for two-thirds of all of Costco's sales even though these customers only comprise one-third of all members.

Costco is trading near 52-week highs at a forward earnings multiple of 22.7 with a 1% yield. Attracting both bargain shoppers like those of rival Wal-Mart Stores (NYSE:WMT) and the luxury consumers of Tiffany, Costco is a safe bet in an uncertain economic recovery.

One other advantage of Costco over Wal-Mart and one that appeals to both rich and poor alike is the treasure-hunt atmosphere at Costco in which new 'gotta have it' bargains like designer purses are continually arriving and may not be there next time. Wal-Mart may have pricing power as the largest retailer in the world, but it doesn't have that same element of surprise.

The one-stop shop for high-end investing
In one fell swoop, a Costco investment is like a basket of high-end retail stocks, encompassing jewelry like Tiffany, art like Sotheby's, automakers like GM, and travel website Priceline.com. But wait, there's more; Costco's international growth, especially in Asia with its fondness for the high end, promises strong upside for the long term and millions of new members.