Investors love stocks that consistently beat the Street without getting ahead of their fundamentals and risking a meltdown. The best stocks offer sustainable market-beating gains, with robust and improving financial metrics that support strong price growth. Does Taseko Mines (NYSEMKT:TGB) fit the bill? Let's look at what its recent results tell us about its potential for future gains.

What we're looking for
The graphs you're about to see tell Taseko's story, and we'll be grading the quality of that story in several ways:

What the numbers tell you
Now, let's look at Taseko's key statistics: 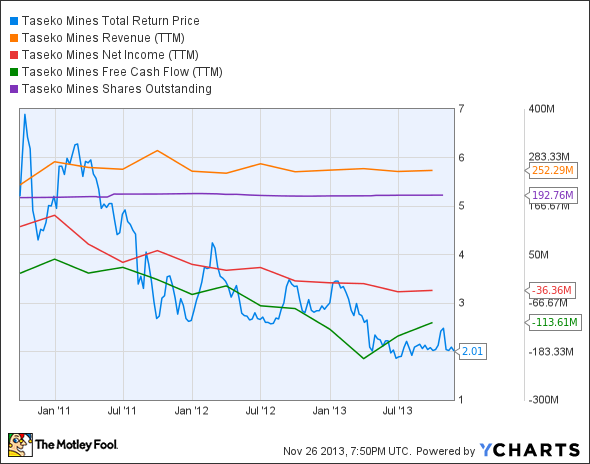 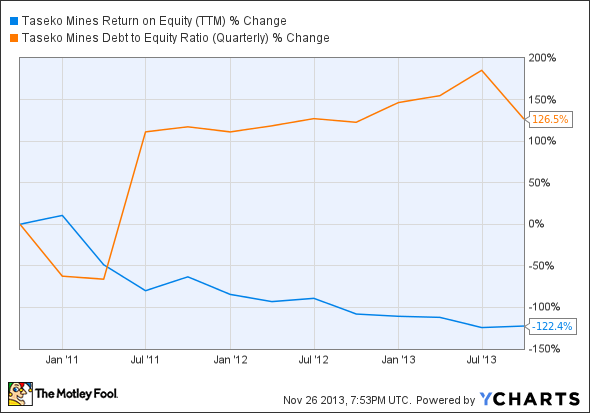 How we got here and where we're going
Taseko earned five passing grades last year, but has endured a terrible 2013 and has thus become one of the very few companies to ever earn no passing grades at all on our analysis. Reliance on commodity prices puts a number of factors beyond Taseko's control, and these factors have all worked against it this year as worldwide gluts and economic malaise have contributed to crush mined commodities across the board. Will 2014 bring better times, or should investors heed these warning signs and bail out? Let's dig a little deeper to find out.

Taseko certainly had an extremely rough year, but was at least able to report positive EPS in the third quarter after disappointing for two straight quarters, because of low-cost production at Canada's Gibraltar copper-molybdenum mine. In addition, the company has been aggressively investing in hedges to keep copper prices at over $3.00 per pound through the second quarter of 2014. Fool contributor Joshua Bondy points out that rival miner Southern Copper (NYSE:SCCO) has an operating cash cost of $1.09 per pound of copper, which offers it a deeper cushion against falling copper prices amid sluggish industrial growth in emerging markets. Taseko, lacking similar development, must push hard on opening new mines and hedging existing projects to avoid running out of cash.

Taseko's not likely to get any relief from international demand, as the International Copper Study Group expects global consumption of refined copper to be 1.2% lower next year. Other peers have taken drastic measures in an effort to counteract volatile metal prices: Freeport-McMoRan Copper & Gold (NYSE:FCX) merged with oil and gas company Plains Exploration & Production in an effort to diversify into more stable natural resources. Taseko and its peers have all taken a beating during our three-year tracking period -- few miners have so much as broken even: 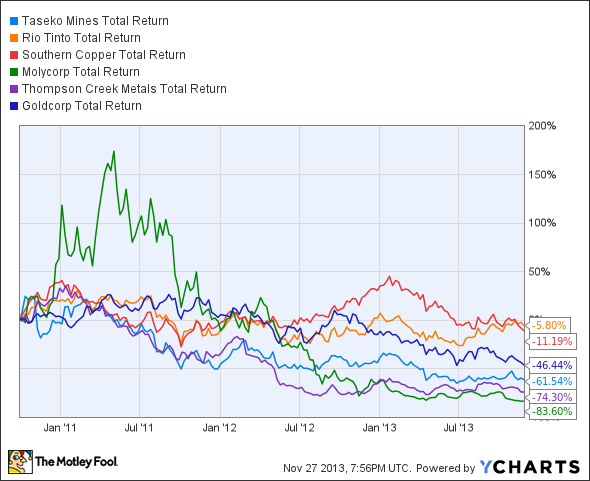 Fool contributor Rich Duprey notes that miners have recently faced significant opposition from local indigenous groups over environmental concerns regarding their mines. Taseko recently suffered a setback for its New Prosperity copper and gold project in British Columbia after Aboriginal tribes raised fears of water contamination at Fish Lake. The company has become a victim of purportedly flawed environmental assessments produced by Natural Resources Canada, which led the Canadian Environmental Assessment Agency to reject Taseko's proposal for the New Prosperity mine.

As a result of this erroneous assessment, the company has filed a complaint regarding the information used by the two assessment agencies to make their final decision. Taseko believes that the tailings storage facility at its New Prosperity mine is similar to Knight Piesold's design being used by Thompson Creek Metals (OTC:TCPTF) at its Mount Milligan mine, which was approved by Canadian authorities some time ago. Other miners have recently endured similar setbacks. Goldcorp and New Gold's massive El Morro project was recently suspended by an appeals court after the Huascoaltinos indigenous community raised concerns over livestock farming and water supplies. Overcoming these regulatory issues will help Taseko recover, but it will need a broad-based commodity rebound as well to truly meet its potential.

Putting the pieces together
Today, Taseko Mines has none of the qualities that make up a great stock, but no stock is truly perfect. Digging deeper can help you uncover the answers you need to make a great buy -- or to stay away from a stock that's going nowhere.