Robert Zimmerman
(dylan588)
Author Bio
Middle aged man investing since his college days. Writing for Motley Fool, in part to learn more about companies I might not know about, in part to encourage folks to be more active in their financial affairs.

Al Gore recently wrote an op-ed piece in The New York Times encouraging investors to sell their holdings of oil-producing companies. Gore's rationale was that these companies own oil assets that will never be fully monetized. He referred to the situation as a "carbon bubble."

Within days it was announced Warren Buffett invested $3.7 billion in ExxonMobil (NYSE:XOM). His reasoning: ExxonMobil produces oil cheaper than any of the other major oil companies and is sitting on huge piles of oil. Of course, ExxonMobil was also selling at the right price. If you agree with Gore, read no more. If you're inclined to go with The Oracle of Omaha, please keep reading.

Buffett's investment
In the days following Buffett's disclosure of the ExxonMobil purchase, many investors analyzed the wisdom of the investment. The debate breaks down this way: Some say Buffett made a good move because ExxonMobil is big, by some metrics cheap, pays a growing dividend, and, barring a disaster of Biblical proportions, will likely be around for the next 100 years.

Others say the investment was a mistake since other companies in the space pay a higher dividend, ExxonMobil's stock has languished compared to many of its peers, and for all of its oil and gas reserves, the cost of getting energy out of the ground is growing, which in turn pressures cash flow. That is, there are better investments than ExxonMobil.

One interesting take on ExxonMobil is that it gives Buffett exposure to the growing energy market in Asia. To be sure, ExxonMobil operates across the continent. However, Chevron, BP, and ConocoPhillips all have operations in these same parts of the world, pay a better dividend, and except for Chevron, sell at a lower P/E ratio than ExxonMobil.

An international player producing oil, gas, and returns
Buffett's sheer size limits which companies he invests in. If you're like me, you don't have that problem. That doesn't mean you can't score gains with smaller energy companies. For example, Noble Energy (NASDAQ:NBL) offers investors an international growth opportunity in a $25 billion market cap package as opposed to ExxonMobil's $407 billion. The company has five major oil and gas assets under development and all are contributing to both total energy production and free cash flow. These assets span the globe from the Mediterranean to the West Coast of Africa to Colorado. While Noble pays less than a 1% dividend, as a growth company, it makes a compelling investment.

As the company experiments with well spacing and length of laterals in its horizontal drilling, oil production has increased 35%. Today, the company plans 1,100 more wells in this play than it had planned in 2011.

Space does not allow for details regarding Noble's other major operations. These include two major natural gas discoveries off the coast of Israel and ongoing production from the coasts of Equatorial New Guinea and the Gulf of Mexico. Lastly, Noble has seen substantial increases in wet natural gas production from the Marcellus Shale. Recently, the stock declined about 10% from its recent peak and may be a buying opportunity.

Home on the prairie
Another buying opportunity, in a relatively small, $20 billion market cap package, may be Continental Resources (NYSE:CLR). The stock recently peaked at $121 before dropping to less than $110. I suspect Continental, Noble, and ExxonMobil have all recently declined due to declines in oil prices. However, Continental recently reported a 38% increase in oil equivalent production compared to the third quarter of 2012. Like Noble, Continental projects more production to come.

Unlike Noble, Continental operates solely in the U.S., primarily in the Bakken oil play. The company also operates in the Niobrara and in Oklahoma. Production and reserves are mainly crude oil. One notable achievement for Continental is steadily decreasing production costs. In the Bakken, it's not unusual for a well to cost up to $10 million to drill. Continental recently announced its drilling costs are now at $8 million with goals to reduce costs even more.

Final Foolish thoughts
It's a free country and Gore can say what he wants. And no one has to listen. Buffett clearly thinks there's no "carbon bubble" and has his money in ExxonMobil. I think Noble and Continental offer appealing alternatives for us small-time investors. Both have outperformed ExxonMobil as shown below. 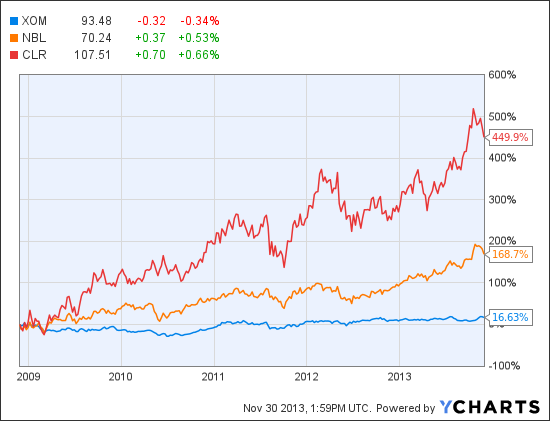