Tesla Motors has proven that EVs are viable and Ford, General Motors, Nissan, and others have dipped their toes in the EV waters. But there are major questions to be answered before the world goes electric.

Electric vehicles have been a hot topic in 2013 after Tesla Motors (TSLA 1.66%) became a market darling. The rest of the industry has taken notice as well, with Ford (F 2.64%), Honda, General Motors (GM 1.70%), Toyota, and others making strides in EVs.

For as much attention as EVs have gotten, they're still in a very nascent state of their development, accounting for a tiny fraction of auto sales. The challenge now for the industry, and investors, is figuring out what the future of EVs looks like and how to get ahead of the curve. Here's where we stand today and where I think EVs are going in the future.

How big is the market?
Right now, the electric vehicle market is a small fraction of the overall vehicle market. In October, 1.23 million passenger cars and light trucks were sold in the U.S., just 10,100 of which were either plug-in hybrid or fully electric.

EV sales have been picking up, primarily because of the Model S's popularity, but even with that success, the market is tiny. 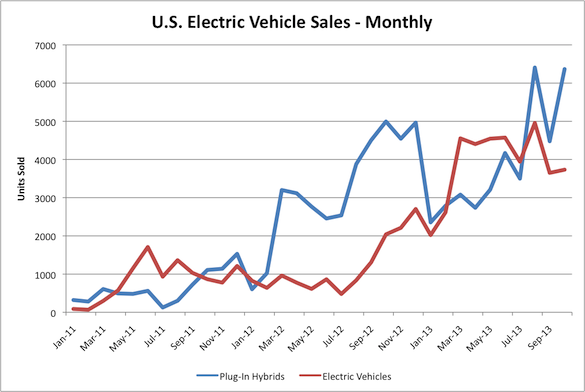 From these humble beginnings, you can see that the market has huge potential. Last month's industry sales rate puts U.S. auto sales alone at around 15.4 million units. Globally, 81.2 million cars were sold last year, so the electric vehicle market could crow 100 times and it would still be a minority of auto sales.

The question for EVs long term is whether they'll be attractive enough for consumers to buy them over internal combustion vehicles.

Can EVs compete?
When cars like the Chevy Volt and Nissan Leaf were released, they were essentially trial runs for automakers. They needed to test the technology that went into EVs and see what the market wanted. The results were bland products that inspired very few buyers and failed to prove any sort of potential in the market.

Tesla Model S battery and chassis. The design brings be battery close to the ground, lowering the center of gravity and improving handling.

That's where Tesla came in. Tesla was able to rethink the automobile from the ground up, redesigning the chassis, drive train, and manufacturing process to conform to electric cars. The result was the Model S, Motor Trend's Car of the Year.

Tesla proved that an attractive EV can be made, but will the industry learn from what Tesla has shown?

One challenge for carmakers now is building vehicles that get enough range to satisfy customers. The Model S is successful in large part because it gets more than 200 miles of range even at highway speeds. By contrast, the Ford Focus Electric gets 76 miles per charge, the Nissan Leaf can go 75 miles, and the Chevy Volt can go just 38 miles all electric. That'll have to be improved by leaps and bounds for EVs to be more than a bit player in the auto industry.

Electric vehicle killer app
If range remains under 100 miles, EVs will only appeal to a small percentage of buyers. But if that can be increased to more than 300 miles and charge times are reduced from hours to minutes, there is a lot of potential. That's the killer app for electronic vehicles and there's progress in that direction.

These are just a few of the research projects going on right now, and with demand for EVs proven, there's now an economic incentive to perform even more research.

Tesla hasn't released a projected range for next-generation batteries, but you can bet that it will push the limits on range as well. The range challenge is the biggest facing the future of EVs right now. If a 1,000 mile range is truly on the horizon and charging times come down, I could see sales growing 10- to 100-fold. Without a big improvement in range, charge time, and cost, EVs will be a sideshow in the auto market.

Foolish bottom line
Are EVs the next big thing? It's too early to give a definitive answer, but there is huge potential. The first challenge of showing that EVs can be made efficiently, with significant range, and be attractive to customer has already been proven by the Model S.

The next challenge is building more attractive vehicles that offer significant range. BMW, Ford, Nissan, and GM may have more to do with that next step than Tesla, which doesn't have the scale to make EV technology ubiquitous. In that sense, all EV manufacturers need each other.

If I had to bet on any disruptive technology in the auto industry, it would be electric vehicles. There's no major infrastructure needed to go electric, and I think the technology challenges facing the industry today will be answered in time. Time will tell if that opinion is right, and EVs will hold more than a small percentage of auto demand.