Lululemon athletica (NASDAQ:LULU) must be really sweating if women are willing to pay even more for Sweaty Betty, another yoga pant brand that's clearly after Lululemon's clientele.

The London-based company recently opened two stores in the U.S. that, like Lululemon, offer free yoga and fitness classes at stores to woo shoppers. One surprising difference, however, are the numbers on the price tags: Sweaty Betty charges 20% to 25% more for its wares than even pricey Lululemon.

But this new entrant isn't just ripping pages from Lululemon's retail play book. It's poking holes in the competition's stretched out yoga pants.

Poaching and posturing
Sweaty Betty has been capitalizing on Lululemon's see-through pants recall, advertising on its website that its pants and tops are tested by actual yogis and dancers performing splits, Downward Dog poses, and Chaturanga (a reverse Downward Dog) to guarantee the quality of the workout duds.

It's not just Sweaty Betty that offers free classes (pole dancing, hot yoga, and ballet barre yoga). Gap also offers free classes at its Athleta stores, and analysts think Athleta could be Lululemon's biggest rival. And there have even been reports that Athleta has lured Lululemon teachers away with steeper discounts on yoga wear.

Both Sweaty Betty and Athleta stores and websites are trying to create the loyal community of 'Lululemmings' that has been part of the bullish case for Lululemon, and it looks like Sweaty Betty is succeeding; US online sales have grown 200% in two years.

A kick in the yoga pants
Last month Lululemon founder Chip Wilson got into hot water when he said in an interview that some women's bodies just don't work with Lululemon and their thighs rubbing together are what cause recent pilling complaints. He then inserted his foot further into his mouth with a YouTube apology which ABC News called "the worst apology ever," angering women even more.

Under Armour has piggybacked on this latest Lululemon stumble by advertising their yoga pants are 'pill-free.' Under Armour has also been investing $250 million in its women's lines, and notably softening its yoga-wear website.

Yoga pants are clearly where it's at.

Gap's CEO Glenn Murphy said of Athleta's success that its yoga pants are becoming  a 'uniform' for chores and errands, joking it is "the new denim."  So successful is their Athleta brand the company is almost doubling the number of new stores to open by 19, taking it to a total of 65 US stores.

L Brands offers yoga pants in its collegiate targeted brand, as well as in its Victoria's Secret line. L Brands yoga wear has the advantage of being in practically every mall, and PINK's yoga selection is attractive to younger women. This brand is so successful the company has opened 50 freestanding PINK stores this year alone.

Nike is a growing threat as its yoga wear selection is slowly improving (they finally got rid of the hideous horizontally striped pants. Yikes!). However, selection is still fairly limited with less than 34 yoga apparel items and limited colors.

Then there's a long list of other smaller threats to Lululemon: JW Nordstrom has its own yoga line, Calvin Klein offers pants so similar that Lululemon sued them, and then there are privately-held companies like Prana, Zobha, Soybu, Lily Lotus, Gaiam, and Mika. 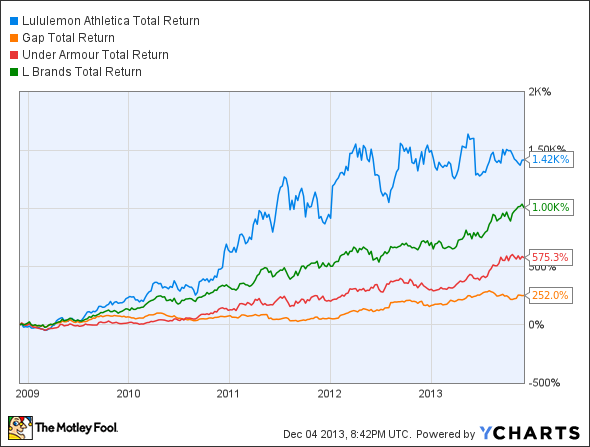 Analysts like Sam Poser of Sterne Agee and Kimberly Greenberger of Morgan Stanley are both concerned about an exodus from Lululemon's loyal customer base. Poser downgraded Lululemon in Nov. 14 saying, "Based on our checks and retail experience, we believe that the core Lululemon customer has been alienated and will begin to look for yoga and active-wear pants from the likes of Nike, Under Armour, Athleta and numerous other brands...We have thought Lululemon has been walking a tightrope for months, and now we believe it will fall off."

On the same day of the Poser downgrade, Kimberly Greenberger of Morgan Stanley weighed in, "The bear case is rivals pressure LULU's 25% EBIT margins more than expected, causing meaningful P/E contraction given 74% of LULU's price is based upon post-2015 growth."

Take a deep breath and look over your shoulder
Lululemon still has a strong customer base, but what made it special -- classes and the high-tech yoga wear -- is being co-opted by the competition that's looking more like a mirror image of the company every day.

On its second quarter earnings call, Lululemon announced that it had addressed its supply chain issues that cost the company $17 million in the Luon pant recall and an additional $40 million in lost sales.The company is also six months in on a search to replace five year veteran CEO Christine Day, who helped the stock rise over 1,000% during her tenure.

Still, if women are willing to pay Sweaty Betty six times more than Old Navy's $20 price for yoga pants, Lululemon needs to exert itself to keep the competition from stealing its clientele.