Chico’s, DSW, and Ross Stores are different types of retailers, and only one of them targets today’s consumers with pinpoint accuracy.

Finding a quality investment in retail isn't easy. Winning in the retail sector is often a matter of winning on price or capturing the consumers imagination as an on-trend retailer. Fortunately, one of the following companies is achieving these goals. We'll take a look at on-trend fashion-apparel retailer Chico's FAS (CHS -2.31%), branded footwear and accessory company DSW (DBI -2.13%), and off-price retailer Ross Stores (ROST 9.57%). Despite recent events, one of these companies is likely to outperform the other two over the long haul. However, the primary focus of this article will be on Chico's, since it's the most difficult for investors to figure out in today's economic environment.

Understanding Chico's
Chico's is more than just its namesake brand. Chico's itself aims for on-trend, unique designs for fashionable women. It has 600 boutiques and 100 outlets throughout the United States and Canada.

One of its subsidiaries, White House/Black Market more commonly referred to as WH/BM, can be looked at as similar to Chico's but as a more affordable alternative. As the name suggests, much of its apparel is either white or black. WH/BM has 400 boutiques and 45 outlets throughout the United States, Puerto Rico, and the U.S. Virgin Islands.

Boston Proper, acquired in 2011, is currently an online and catalog brand offering high-end apparel for the modern woman. However, Boston Proper is shifting from direct-to-consumer only to an omni-channel business. The brand will still be offered online and in catalogs, but it will also be offered via new retail locations (16-20 opening next year).

Now that you have a basic understanding of the company, let's take a look at some results and future expectations as well as if Chico's is likely to be the top performer of the three aforementioned retailers going forward.

Recent results
In the company's third quarter, net sales increased 3% to $655.6 million year over  year. This was primarily due to new store openings. Comps actually declined 1.4% after growing at a 9.9% clip in the year-ago quarter. A comps decline of this magnitude isn't often seen, and it's a concern. Chico's reported that the primary reasons for the decline were difficult year-over-year comparisons due to strong sales in the year-ago quarter and softened traffic.

WH/BM saw comps increase 2.5%. This shouldn't come as a surprise considering today's value-conscious consumer. While comps grew a more impressive 6.4% in the year-ago quarter, WH/BM presents reason for optimism. As long as a company has a brand that's performing well, it has potential. If necessary, Chico's could cut down on its namesake locations while increasing its WH/BM locations, thereby maximizing the overall company's potential to match today's consumer desires.

Looking ahead, Chico's has a long-term goal of increasing sales at a double-digit pace and for diluted earnings per share to grow in the mid-teens. To fuel this growth, the company aims for an omni-channel approach, Canadian expansion, and the opening of its first Boston Proper stores.

Every retailer is aiming for omni-channel improvements, so Chico's isn't likely to steal much market share in this regard. The opening of Boston Proper stores has potential, but only as long as financial markets continue their rapid ascent since Boston Proper primarily targets the high-end consumer. Canadian expansion might have the most potential, thanks to a stronger consumer and a hunger for American brands.

Now let's take a look at Chico's versus DSW and Ross Stores when it comes to potential.

Chico's vs. DSW vs. Ross Stores
First take a look at top-line comparisons for these three companies over the past year: 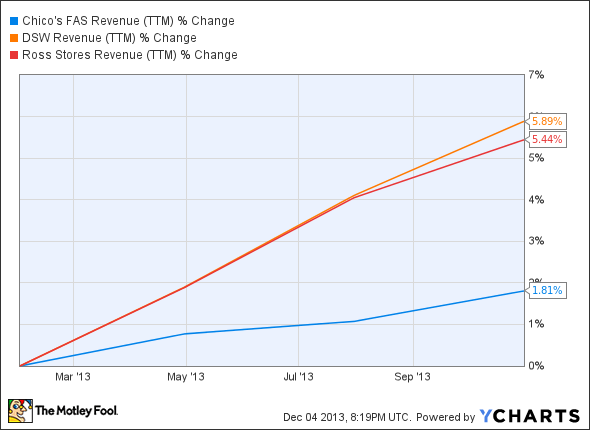 Chico's lags its peers, mostly because of the target market for Chico's. DSW offers everything from shoes to apparel to accessories for men and women, and it has done a good job growing in the face of economic weakness. DSW reported a slow start to the fall, but that momentum has picked up since, with traffic and sales increasing. However, comps still declined 0.7% year-over-year for the quarter after seeing a 6.3% improvement in the year-ago quarter.

It's logical that Ross Stores is the only retailer of the three that saw a comps improvement in its most recent quarter. As a discount retailer offering 20% to as much as 70% off department store prices, it's attracting many of today's value-conscious consumers. In the third quarter, Ross Stores saw comps grow at a 2% clip. This isn't quite as impressive as the 6% improvement in the year-ago quarter, but it's still a positive.

And while Ross Stores expects this holiday season to be more promotional and competitive than any holiday season in the past, it has a little extra ammo with $129 million available for share buybacks in the fourth quarter.

The bottom line
Chico's management is wise and will likely make strategic moves to maximize the company's potential down the road. However, in the current economic environment, it's difficult to see Chico's surprising investors in any significantly positive manner. DSW has fought off economic headwinds well, and its top-line growth has been consistent. However, comps declined in its most recent quarter. Ross Stores saw comps improve in its most recent quarter, simply because it targets today's value-conscious consumers. This target market is the reason Ross Stores is likely to be the top performer of the three going forward.