Take a look at three important charts that break down this record year for master limited partnership IPOs.

There was no shortage of news on the IPO front for master limited partnerships in 2013. The year generated an incredible 20 IPOs, topping the previous record of 13 set in 2007. In 2006, there were 10 MLP IPOs and eight general partner IPOs for a total of 18 MLP-related debuts, but this year's number outpaces that mark as well. Today we're taking a look back at the record-setting MLP class of 2013.

Easy money
Our 20 MLPs raised roughly $7.5 billion in equity combined with their initial offerings. Here's how it looked by month: 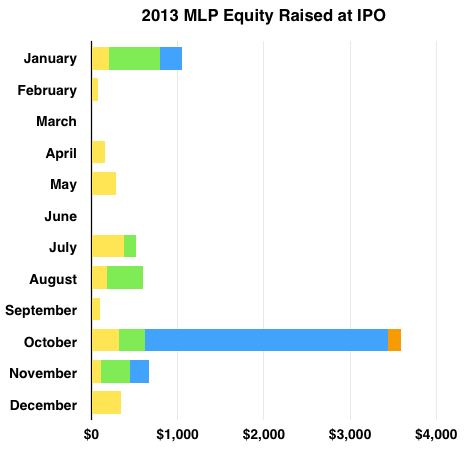 Not only was October tops by the number of IPOs, with four, but thanks to the massive $2.8 billion raised by Plains GP Holdings (PAGP -1.13%), it's also the highest-grossing month by a long shot. Ironically, though it's structured as an MLP and therefore is included on this list, management elected to give up the pass-through status at Plains GP, and it will be taxed as a corporation.

The second biggest IPO, in terms of equity raised, was CVR Refining (CVRR) in January. CVR raised $600 million in the year's second IPO.

Variety is the spice of life
While midstream MLPs are still the dominant partnerships coming to market, we had an awful lot of variety this year, as compared with years past. Let's look at our 20 MLPs by energy subsector: 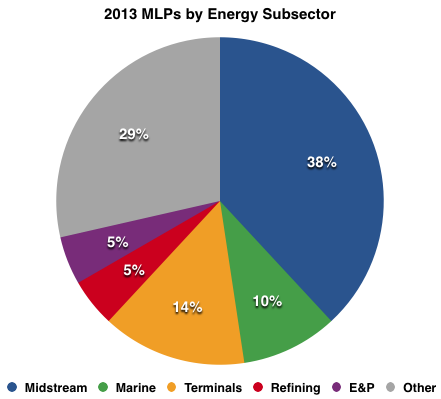 Performance
Finally, we've got a massive chart showing the year-to-date price performance of each MLP: 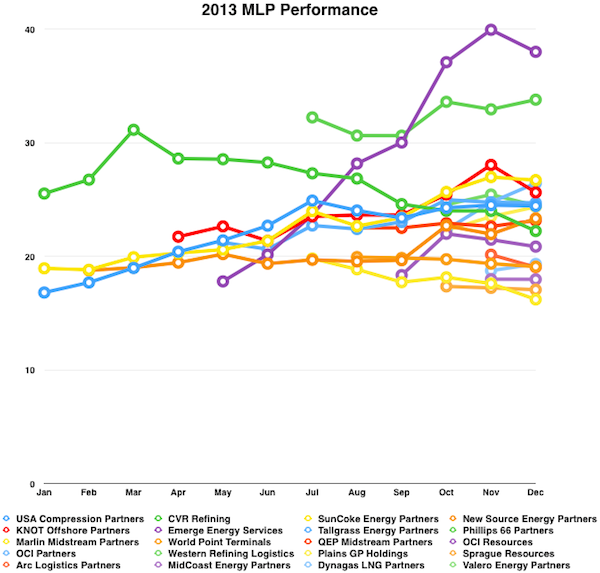 Twenty different MLPs in one chart can only tell you so much, but there are important takeaways here. First and foremost, Emerge Energy Services is far and away the best-performing MLP in the class of 2013. Emerge produces frack sand and processes and distributes transportation fuels. At the time of this writing, it's up just shy of 130% on the year.

Because this chart shows the month-end closing price for each MLP, we miss the effect of Phillips 66 Partners (PSXP) 30% pop on its first day of trading, but there is no mistaking the market's love for a stock that priced at $23 per unit and hasn't come down below $29 once this year.

The other point would be that, for the most part, these MLPs more or less travel in one pack. They're all priced similarly, despite varying offering sizes and the make-up of their respective businesses. It will take at least another year on the market to separate the wheat from the chaff.

Bottom line
There are still a few more MLPs in the hopper, though 2014 has a good chance of being more about the consolidation of the space than IPOs. Dominion and PBF Energy are both working on plans to spin off MLPs from existing assets, while several CEOs have made public comments regarding acquisitions. In other words, the excitement in the MLP should continue into next year.

Fool contributor Aimee Duffy has no position in any stocks mentioned. The Motley Fool recommends Dominion Resources. We Fools don't all hold the same opinions, but we all believe that considering a diverse range of insights makes us better investors. The Motley Fool has a disclosure policy.