But few of us can invest in every single dividend-paying stock on the market, and even if we could, we're likely to find better gains by being selective. Today, two companies at opposite ends of the American food-production chain -- one in the fields and one at the checkout line -- will square off in a head-to-head battle to determine which offers a better dividend for your portfolio.

Founded in 1901, Monsanto (NYSE:MON) is one of the world's leading producers of genetically modified seeds, and its flagship product, Roundup, ranks among the world's best-selling herbicides. Monsanto was the first company to genetically modify a plant cell, and has since transformed itself into the leading face of GM seed through several mergers and spin-offs since 1997. Monsanto has more recently completed some notable acquisitions as well -- Delta & Pine Land in 2007 and Climate Corp. in 2013 -- to strengthen its position in the global GM seed markets.

Founded in 1980, Whole Foods Market (NASDAQ:WFM) is the world's largest natural and organic foods supermarket chain. Headquartered in Austin, Texas, the company's grown to a footprint of more than 340 stores throughout the U.K., Canada, and the United States. Whole Foods has fueled its rapid growth by opening new stores and by acquiring other natural-food chains -- Nature's Heartland, Fresh Fields Markets, Bread & Circus, and Wellspring Grocery have all been acquired to add to Whole Foods' footprint.

Round one: endurance (dividend-paying streak)
According to Dividata, Whole Foods began paying quarterly dividends in 2004, which amounts to a nine-year streak. The organic food purveyor falls short of Monsanto's streak, which began in 2001.

Round three: power (dividend yield)
Some dividends are enticing, but others are merely tokens that barely affect an investor's decision. Have our two companies sustained strong yields over time? Let's take a look. 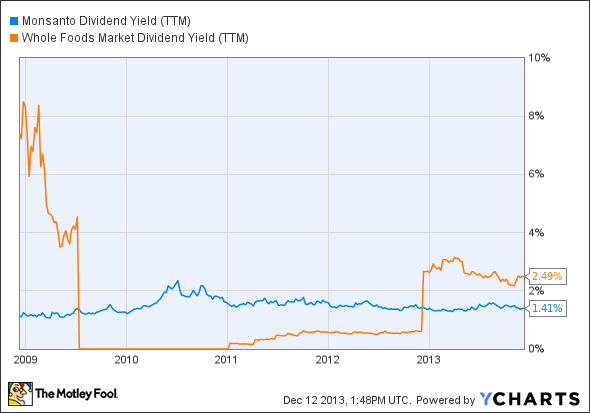 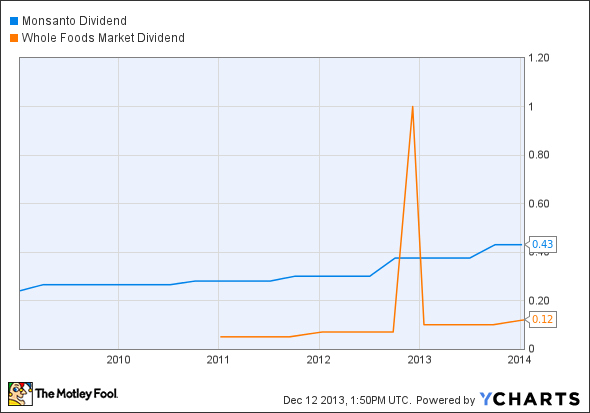 Round five: flexibility (free cash flow payout ratio)
A company that pays out too much of its free cash flow in dividends could be at risk of a cutback, particularly if business weakens. We want to see sustainable payouts, so lower is better. 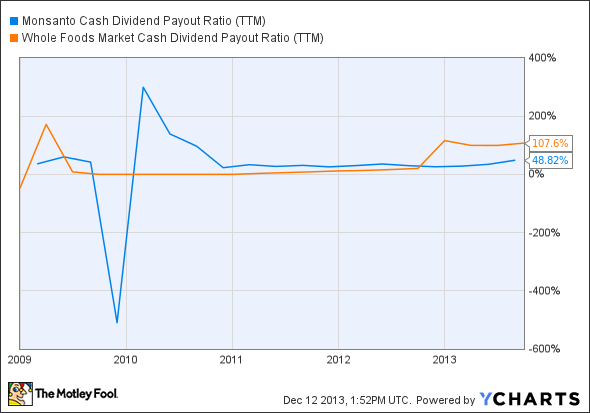 Bonus round: opportunities and threats
Monsanto may have won the best-of-five on the basis of its history, but investors should never base their decisions on past performance alone. Tomorrow might bring a far different business environment, so it's important to also examine each company's potential, whether it happens to be nearly boundless or constrained too tightly for growth.

One dividend to rule them all
In this writer's humble opinion, it seems that Whole Foods has a better shot at long-term outperformance, because of a longer growth runway (Monsanto already owns a big chunk of a maturing market) and a stake in the shift toward more healthful eating. Biotech seed producers like Monsanto have been facing strong resistance from people around the world, which may hinder future growth prospects. Whole Foods Market could benefit from this same trend, which will fuel rapid demand for organic and natural foods. You might disagree, and if so, you're encouraged to share your viewpoint in the comments below. No dividend is completely perfect, but some are bound to produce better results than others. Keep your eyes open -- you never know where you might find the next great dividend stock!