Novo Nordisk (NVO) and Eli Lilly (LLY) are giants when it comes to treating diabetes, but is one a better buy than the other?

Novo Nordisk (NVO -4.07%) and Eli Lilly (LLY -2.95%) have a tough job on their hands. The two companies are the largest makers of diabetes drugs in the world, which means they're largely responsible for helping more than 347 million people manage their disease. Novo and Lilly have a lot of opportunity to increase sales by innovating new treatments and creating new ways to deliver them. But to keep on growing and rewarding shareholders, Novo and Lilly will need to transform those discoveries and sales into profits.

Debating earnings
Sadly the number of people suffering from diabetes is growing, not shrinking.  In the United States, nearly 79 million adults have pre-diabetes, or elevated blood glucose levels. And nearly 27% of those ages 65 and older have diabetes, suggesting that longer-living baby boomers will drive the number of diabetics even higher.

Thus far, both of these companies are successfully using those unfortunate statistics to boost their bottom lines. At Novo, more than 38% of its sales turn into operating profit, while at Lilly, nearly 27% drops to net profit. 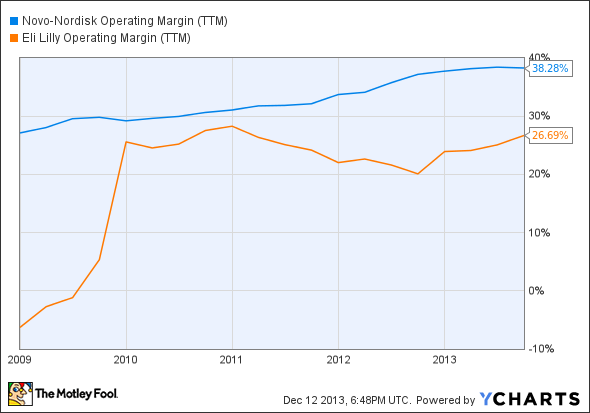 Novo's solid margins are helped by new modern insulin products -- essentially, insulin that's modified to work better and last longer. Those higher-margin products are increasingly accounting for a larger portion of Novo's sales, allowing the company to drive earnings growth.  As a result, analysts are increasingly optimistic about Novo's earnings next year; expecting $8.54 per share, up from the $8.39 they predicted 90 days ago.

At Lilly, analysts are looking for earnings of $2.78 per share next year. However, those estimates, which ticked up slightly in the past three months, only tell half the story: Lilly is set to be heavily punished by the patent cliff next year.

This week, the FDA approved generic versions of Lilly's blockbuster depression drug Cymbalta, which generated $4 billion in sales during the first three quarters of this year. As those generics win market share, Lilly will be hard-pressed to replace that revenue. Since Lilly is expected to earn $4.14 per share this year, the Street's predictions of $2.78 per share in 2014 aren't nearly as enticing as they may seem.

Debating valuation
Given the upcoming drop in sales, it's not surprising to see investors only paying roughly 11 times trailing earnings for Lilly.  But that may not be low enough.  Using forward earnings estimates, investors are paying nearly 18 times earnings, which is historically a bit rich.

Meanwhile, Novo investors are paying just shy of 22 times trailing earnings, but only 14 times expected earnings next year. Given that Novo's five-year average P/E multiple is 21 times earnings, it appears there may be an opportunity for Novo to head higher. 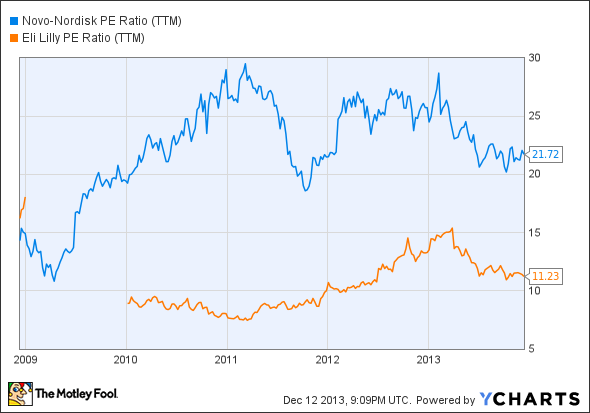 Novo has a better operating margin than Lilly, is expected to grow earnings next year, and appears relatively inexpensive on forward earnings expectations. That's quite a contrast to the struggling Lilly, which has to get some wins from its pipeline soon if it wants to offset sales lost to generic competitors.

Overall, it appears Novo may offer a better balance of growth and value for investors seeking exposure to the fast growing $478 billion global market for diabetes treatment.   That suggests investors should keep a close watch to see if Novo can overcome an early 2013 FDA rebuff of its diabetes drug Tresiba and successfully bring its next-generation, once-a-week diabetes drug semaglutide through phase 3 trials.