Jack Frost is already nipping at noses in most of the country. With The Old Farmer's Almanac calling for a nippier winter than usual, it's the perfect time for investors to take the temperature of some of the big names in cold-weather gear.

This is a family-run business whose octogenarian Chairman Gert Boyle has to be the coolest CEO around. She's most famous for the company's iconic "One Tough Mother" ad campaigns.

Tough Mother Gert's son, Timothy Boyle, is CEO and holds a 41% stake.The guy has a great sense of humor, too, starring in videos where Mom Gert sends him through cement mixers and car washes and off cliffs to prove the products' performance.

On the third-quarter earnings call CEO Boyle was very bullish:

"We will, in fact, have some growth in '14. China is a big part of our future and that business will be significant to helping us, on a global basis, get bigger in '14. But we're very excited and frankly, our board wouldn't have authorized a further enlargement of our dividend had they not seen these kinds of opportunities and been convinced of them....So we feel we're in a terrific position regardless of the weather."

That dividend raise of 14% is just another forecast of fair weather ahead for Columbia shareholders. Columbia currently yields 1.50% and trades at a trailing earnings multiple of 25.34, still lower than PVH and Deckers.

Columbia is not just a cold-weather company. It has 16 proprietary fabric technologies that keep you cool, repel insects, and even one designed for fishing that keeps blood and guts from staining. Fellow Fool Michael Lewis calls it a breakout stock with "a fantastic supply chain management team."

No matter what you think of the style, UGG boot sales are strong enough to make UGG Australia Deckers' most important property, accounting for 84% of net sales. Deckers owns six other non-competing brands with Teva and Sanuk at 8% and 7% of net sales, respectively.

Despite Street sentiment that UGGs are a fad, a company survey shows more women than ever are aware of -- and are considering buying -- them. But wait, there's more. The company has expanded into fashion boots (leather and not sheepskin) challenging rivals such as Steven Madden, and is aggressively courting men. Deckers opened its first men's store in 2012 and eventually expects men's footwear to contribute 20% of total revenues. 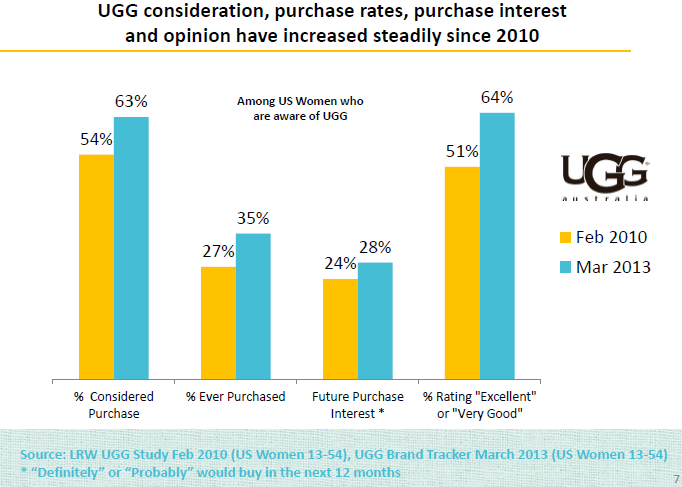 To hedge itself against volatile sheepskin prices the company introduced the UGGPure boot, a proprietary process using wool attached to a backing, which the company thinks has a promising future.

The company's share price, up 122% this last year, has come a long way since Deckers' year of challenges in 2012, with the highest sheepskin prices in years, an abnormally warm winter, and European economic weakness.

Last on our list of wintery retailers is V.F. Corporation, with a market cap of $25.88 billion. The company owns the popular North Face outdoors brand. VF Corp. trades at the lowest P/E of these at 22.32 and offers the highest yield at 1.90%. The company is very shareholder-friendly, raising the dividend by 21% in October and splitting the stock four-for-one.

North Face -- one of VF's top five brands (out of 30), along with Lee, Vans, Wrangler, and Timberland -- has gained remarkable traction on college campuses. Although designed for the outdoorsy and athletic, teenagers and college kids are sporting the brand as they shamble between classes. Outdoor brands, its fastest-growing business, comprised 54% of 2012 revenues for the company. That number reached 60% in the third quarter.

On the third-quarter call, CEO Eric Wiseman said the company was investing an additional $50 million in North Face, Vans (a popular shoewear line), and China, being their three strongest areas of growth. In fact, the company has doubled its investment in North Face in China.

Should you buy before blizzards begin?
With an improved economy and a chilly winter expected, all three of these companies should see strong sales. So which one should investors cozy up to?

Of the three, Columbia Sportswear has the most upside being a nimble small cap  with strong insider conviction (66%). It also offers a 1.50% yield and its earnings multiple is only slightly higher than V.F. Corp. V.F. Corp's North Face is performing very well. But if cold weather is a big part of your investment thesis, note that North Face is just one of the company's 30 brands. As for Deckers, now is UGG's time to shine during the winter and  holiday gifting season. But with Deckers, just like the pristine snow turns to ugly slush, so can market sentiment turn on Deckers.