To say that the past four weeks of Obamacare enrollments and the previous two months have been miles apart wouldn't even be doing this bifurcation justice!

The first two months of open enrollment, marked by the Oct. 1 launch of state and federally run health exchanges, were absolutely plagued by technical glitches. The federal Healthcare.gov required a major overhaul by three prominent tech companies -- Oracle, Red Hat, and Google -- which allowed a mere 137,204 people to sign up through November in the health insurance marketplace covering 36 states.

Even some state-run exchanges struggled mightily, with Oregon clocking in with a laughable 44 enrollees (seriously, 44!) through November. Hawaii's health exchange opened more than two weeks late and crashed repeatedly after it finally went live.

The past few weeks, however, have been a completely different story. Healthcare.gov is finally operational for a majority of Americans and most state-run exchanges have worked out their kinks. According to an Obama administration announcement on Sunday, 975,000 people enrolled in health care coverage through Healthcare.gov in December, bringing the cumulative total to more than 1.1 million, or roughly a 700% gain.

Enrollment gains in state-run exchanges have been equally impressive, according to the limited data we've received thus far. California, New York, and Washington state all reported that enrollment surged just days prior to the Dec. 24 cutoff date in order to be covered by Jan. 1, 2014.

But this tale of two time periods certainly doesn't tell the whole story behind Obamacare. There are both positive and negative unknowns that will more clearly spell out how successful the program has been at reducing the number of uninsured people in this country.

A number of unknowns
What I consider to be one of the most important unknowns is just how many completed applications are still sitting out there for people who haven't yet selected a health insurance plan. At the end of November, there were more than 1.9 million cumulative applications that were completed across the state and federal levels for which a plan had not been selected. It's highly unlikely that these Americans would complete the somewhat arduous and intrusive application process if they didn't have any intention of eventually signing up. While it wouldn't be prudent to count all of these applicants as enrollees, I feel a good percentage are bound to select an insurance plan before the end of open enrollment on March 31, 2014.

On the flip side, the current 1.1 million enrollees on the Obamacare website is well short of the better than 3 million enrollees that the Department of Health and Human Services forecast . This is why I consider the applicant figure so important, because it would give us some indication of how many "deferred enrollees" are sitting out there waiting for the late March 2014 coverage deadline.

Long story short, the Obamacare website's 700% jump in enrollments could be fantastic or terrible news. We won't know the whole story until we get more useful data over the next two weeks. 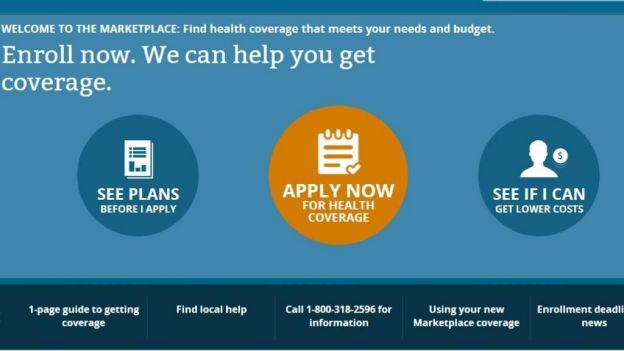 Breathing a sigh of relief
I'll tell you that one company breathing a big sigh of relief following this enrollment surge is CGI Group (NYSE:GIB), the primary architect behind Healthcare.gov. Although little to no credit and most of the blame for the poorly constructed site has been placed on CGI, the mere fact that Obamacare website enrollments soared could take some of the heat off and reduce the threat of an order slowdown in the future.

This data should also help relieve some, but not all, of the concerns associated with insurance companies such as UnitedHealth Group (NYSE:UNH) and Cigna (NYSE:CI). Concerns had escalated recently that Cigna, which ponied up $3.8 billion to purchase HealthSpring back in 2011 in order to gain access to its network of government sponsored patients (i.e., Medicaid), and UnitedHealth, the nation's largest insurer , might actually see membership shrink due to millions of health insurance policies that are set to be canceled on Jan. 1 for not being in compliance with the tougher benefit laws of the Patient Protection and Affordable Care Act. The latest enrollment data suggests these two insurers are still on strong footing and may have actually grown their memberships from the prior quarter.

Finally, hospital operators like Tenet Healthcare (NYSE:THC), which operate a number of its hospitals in states within the Healthcare.gov network, have to be thanking their lucky stars that enrollments surged. It's not as if hospitals were struggling in the first place, but investors have given these care facilities quite the premium with the expectation that more insured persons being treated would result in more revenue being collected. A big boost in enrollments could mean plenty of extra revenue on the horizon for Tenet.